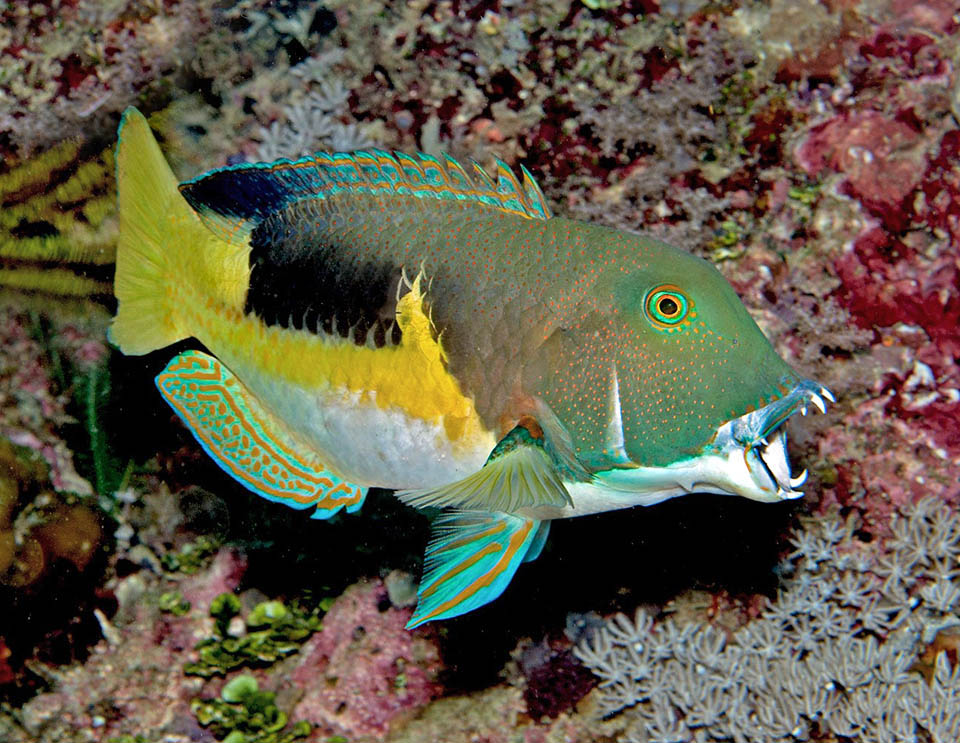 Spectacular Choerodon anchorago attacking. The name of the genus refers to the protruding canines that evoke those of the wild boars © Anna & Ned DeLoach

Choerodon anchorago (Bloch, 1791) belongs to the class of the Actinopterygii, the ray-finned fishes, to the vast order of the Perciformes and to the multicoloured family of the Labridae, presently (2020) rich of 71 genera and 549 species, with surprising liveries often linked to showy sexual dimorphisms and changes of sex.

The name Choerodon, assigned to 26 species of the family, comes from the Greek term“Χοιρός” (khoiros) = pig, pork and “ὀδών” (odon) = tooth, with reference to the protruding canines that somewhat evoke those of the wild boars. The specific term anchorago, seems to refer to the unusual drawing it has on both sides, looking like an anchor.

It is present in tropical Indo-Pacific. Indicatively, we find it in India and in Sri Lanka, the Andaman Islands, in Thailand, Malaysia, Indonesia, Palau Islands, Papua New Guinea and Australia. Northwards, is present in the Philippines, Vietnam, China, Taiwan and Ryukyu Islands in southern Japan. Towards south-west we find it in Micronesia, in the Vanuatu Islands, in New Caledonia, which mark the southern limit of the species, whilst eastwards it has colonized Tonga, Niue and French Polynesia. 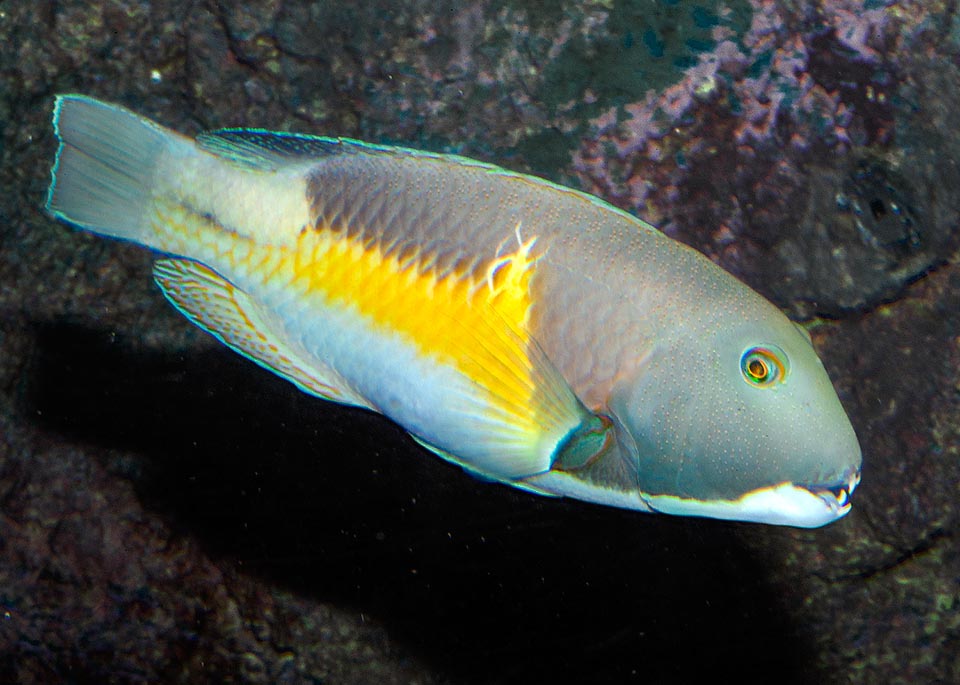 Fished small for the aquaria and adult for the fish market, the Choerodon anchorago can be 50 cm long in the tropical Indo-Pacific © Giuseppe Mazza

It lives among the madrepore formations not beyond the 25 m of depth. It swims in the seagrass meadows, in sandy zones, often among rocls and madrepore remains, but also on the external slope of the reefs between madrepores and soft corals. The young are frequent in the estuaries and among the roots of the mangroves where they find food and shelter.

The livery is a “Picasso painting”. The body seems broken in two parts by by a vertical more or less intense yellow, yellowish to orange, band extending in a triangle widening towards the ventral zone, white up to the tail. 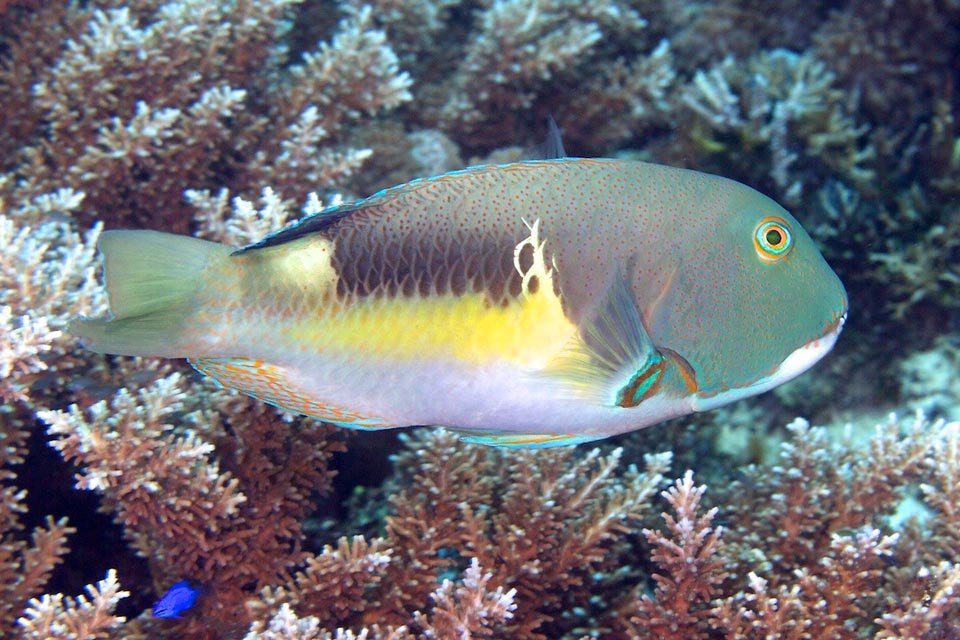 Apart small dots and arabesques, the yellow-black contrast, at times intense, breaks usually the outline mimicking the head, while the pale tail distracts and confuses predators. Intelligent fish that uses tools to break the bivalves it’s greedy of, throwing them several times on a particular stone of its territory used as hammer © Allison & Carlos Estape

Aloft, on the sides and the back, the livery is greyish-greenish finely spotted of orange towards the head and very dark towards the tail, where it forms a neat black square reduced to a simple horizontal stroke at tghe base of the white and yellowish saddle of the lower back.

The Choerodon anchorago nourishes of all what it can find, at the cost of overturning with its teeth small rocks and fragments of madrepores on the bottoms. It looks for, and often finds on the hidden face, molluscs, crustaceans, small worms, starfishes and small sea urchins. It has been noted that at times it breaks the shell of the bivalves throwing them repeatedly against a rock, used, surprisingly, then, as a tool, like a hammer. 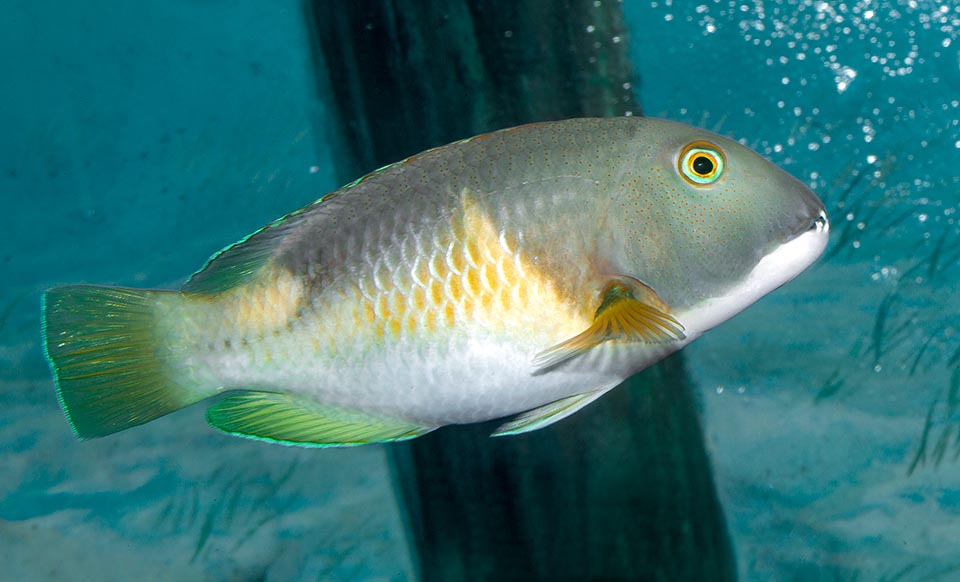 Reproduction occurs in group with eggs abandoned to the currents. The young often grow among the mangrove roots where they get abundant food and hideaways © Giuseppe Mazza

The young swim in small schools whilst the adults, territorial, live mainly alone apart during the reproduction period, usually between January ans March, when take place the group weddings with eggs entrusted to the currents.

Fished for the aquaria, but mainly for the local fish markets, the Choerodon anchorago is unfortunately losing membres. Theoretically, the population may double in 1,4-4,4 years, but they are often far apart, and the vulnerability index of the species marks already 48 on a scale of 100.