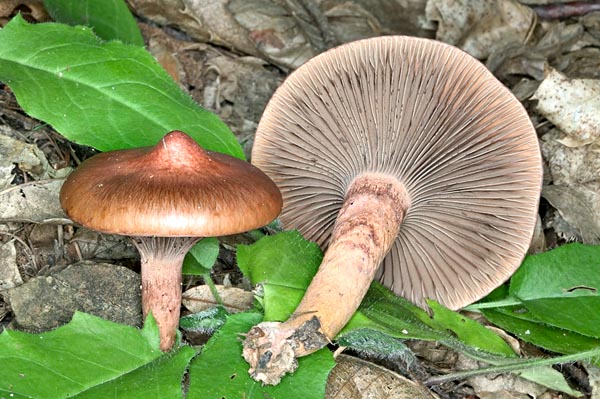 The etymology of the name comes from the Latin word “rútilus” = reddish, flamboyant.

To the genus Chroogomphus belong fungi having a fleshy, more or less felted or glutinous and umbonate.

The decurrent gills on the stem, have an orange-ocher-pink colour which becomes blackish-brown when ripe. The flesh is orange, carmine-red when cut. The veil is fibrillous. The mycelial hyphae at the base of the stem are amyloid, the spore print is olive-grey.

Cap: 4-10 cm, initially hemispheric, then conical-campanulated, finally flat and also more or less depressed, with umbo; margin initially adherent to the stem, involute, then curved downwards and only belatedly outstretched. Smooth cuticle, viscous when the weather is humid, bright when the same is dry, fibrillose, of grey-brown, ochre-brown, vinous, colour, with copper reflexes or olivaceous shades.

Hymenium: thin gills, decurrent on the stem, thick, arcuate, intercalated by lamellulas; the colour goes from the olive ochre, olive-green to the blackish-brown when ripe. 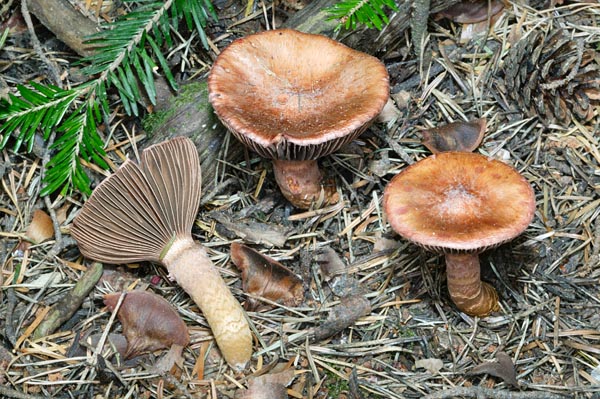 Much common, it grows in summer and autumn under two-needle pines © Giuseppe Mazza

Stem: 5-10 x 1-2 cm, slender, cylindroid, attenuated at the base, full; surface rather viscid, fibrillose, with thin scales arranged in a zigzag, concolorous to the cap, more wine-red in the upper part, yellowish at the base, at times decorated with remnants of the veil which form an annular zone in the upper part in the young fungus.

Flesh: firm, compact, mushy when ripe, fibrous in the stem, of orange-ochre, salmon-pink, colour, finally, in the ripe specimens, also wine-red, yellow or chrome-yellow at the stem base. No distinct smell, mild nutty flavour.

Habitat: quite common species, it grows, in summer and in autumn, under two-needle pines: Pinus pinea in Mediterranean environment; Pinus nigra and Pinus sylvestris in the mountains.

Edibility: edible, but of poor value.

Remarks: it is a fungus growing exclusively in symbiosis with two-needle pines, in the mountains as well as in the Mediterranean zone. 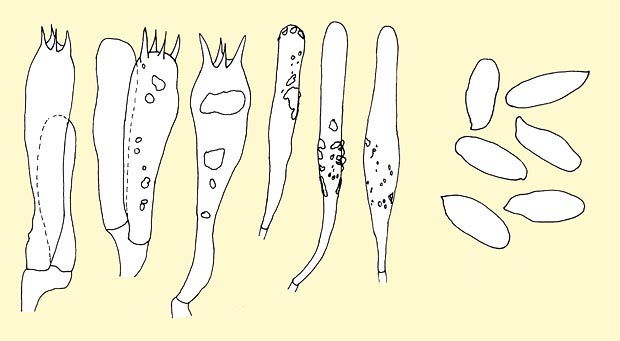 It is easily identifiable due to the greasy cap in wet weather, bright when the same is dry, to the colour going from the lateritious to the red-wine and to the chrome-yellow flesh at the base of the stem.

It may be mistaken with: Chroogomphus helveticus (Singer) M.M. Moser, which, however, is smaller and has a velvety, fibrillous cap, just viscid in wet weather, of orange yellow colour, staining of reddish when rubbed; the gills are paler, blackish when ripe; tomentose stem with colour similar to that of the cap, when touched, it stains of orange brown and then darkens; firm flesh, orange ochre, darker at the base of the stem. The Chroogomphus rutilus fo. fulmineus (Heim) Courtecuisse, much similar, however smaller, has much strong red coloured cap, at times almost blackish in the centre, with vermilion red or bright orange shades, without umbo, the orange-yellow flesh which, if in contact with ammonia, turns to violet, it also grows under two-needle pine in Mediterranean environment.