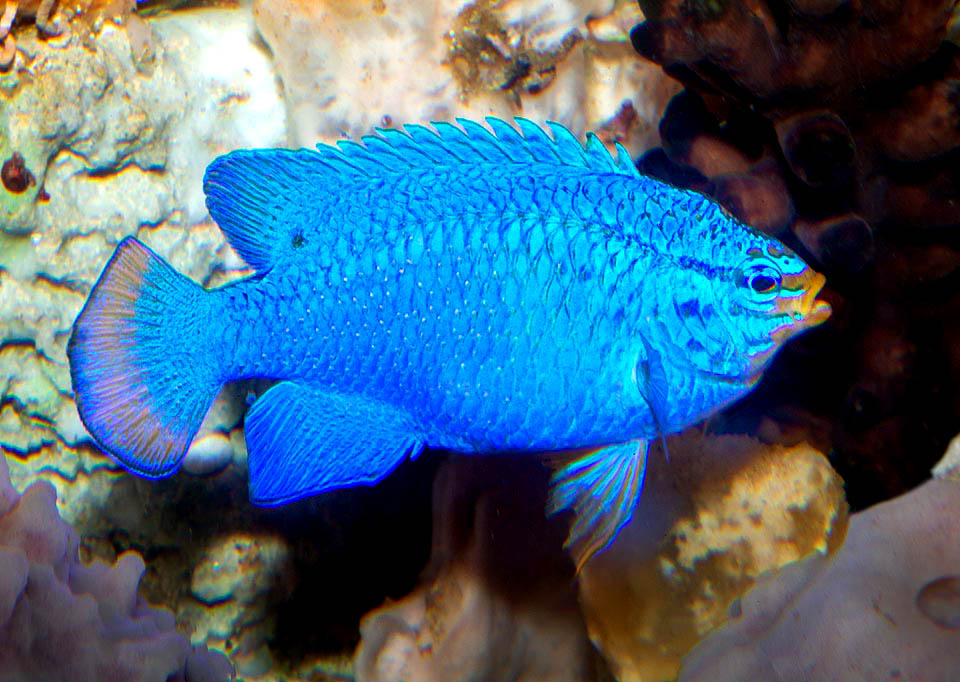 Male of Chrysiptera cyanea in defensive posture. The tip of the snout, the chin, the pelvic and the caudal fins are colouring of yellow © Giuseppe Mazza

The Chrysiptera cyanea (Quoy & Gaimard, 1825), known in Italy as Blue demoiselle or Sapphire devil taking the English name of “Blue devil”, belongs to the class of the Actinopterygii, the ray-finned fishes, to the order of the Perciformes and to the family of the Pomacentridae that counts 29 genera and more than 400 species among which the well known clownfishes and the damselfishes.

The Chrysiptera cyanea has a vast distribution along the coasts of the eastern Indian Ocean and the western Pacific. Indicatively, we find it in India, Thailand, Vietnam, Indonesia, Philippines, Taiwan, RyuKyu Islands and south of Japan, then, in Oceania in Palau, the Northern Marianas, in Papua New Guinea, Australia, Micronesia, Solomon Islands, Vanuatu Islands, New Claedonia, Fiji Islands and Samoa. 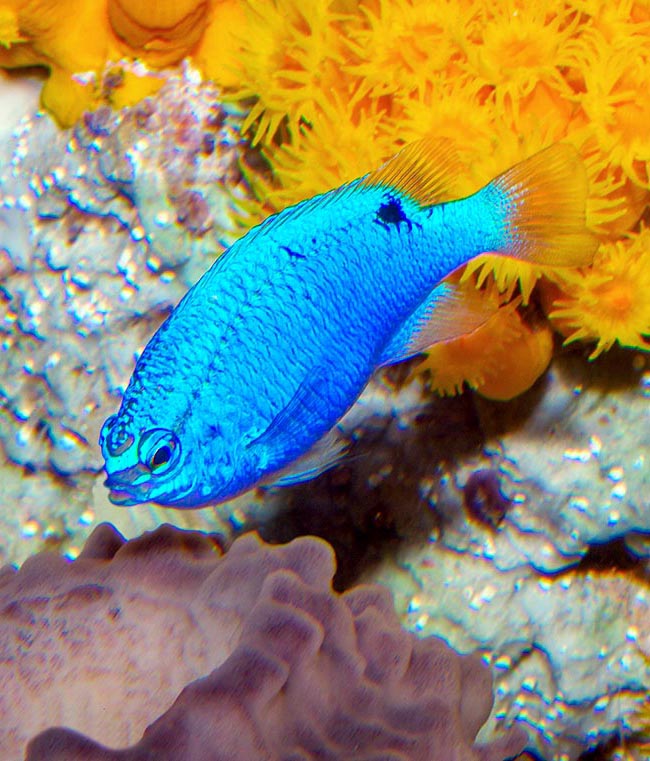 It lives in very shallow waters, as never goes down beyond the 10 m of depth. It loves the calm lagoons with rocks and madreporic formations rich of hideaways.

The males of Chrysiptera cyanea may reach the 8,5 cm, but the females, smaller, do not exceed the 6,5 cm.

The body is flattened laterally.

The head has a small protractile mouth, armed with tiny thin and sharp teeth.

Most of the body is blue electric with splendid iridescences like in many species of the genus Chrysiptera, but the livery displays an evident sexual dimorphism.

Twinklings and colour combinations that can distract for a moment the predators while the fish finds shelter in a ravine. They are very fast fishes, so much that he who wants to fish it out in a small home aquarium is almost obliged to disassemble the aquarium in order to succeed.

The Blue demoiselle is a diurnal species that often swims in small schools formed by one male, several females and some young. It nourishes of zooplankton, small crustaceans and algae.

The eggs, spawned in hundreds by the female on duty, are glued to the bottom, and the male, as usual for the fishes belonging to this genus, surveys them until the hatch oxygenating them with the movement of the fins in order to avoid the onset of molds. 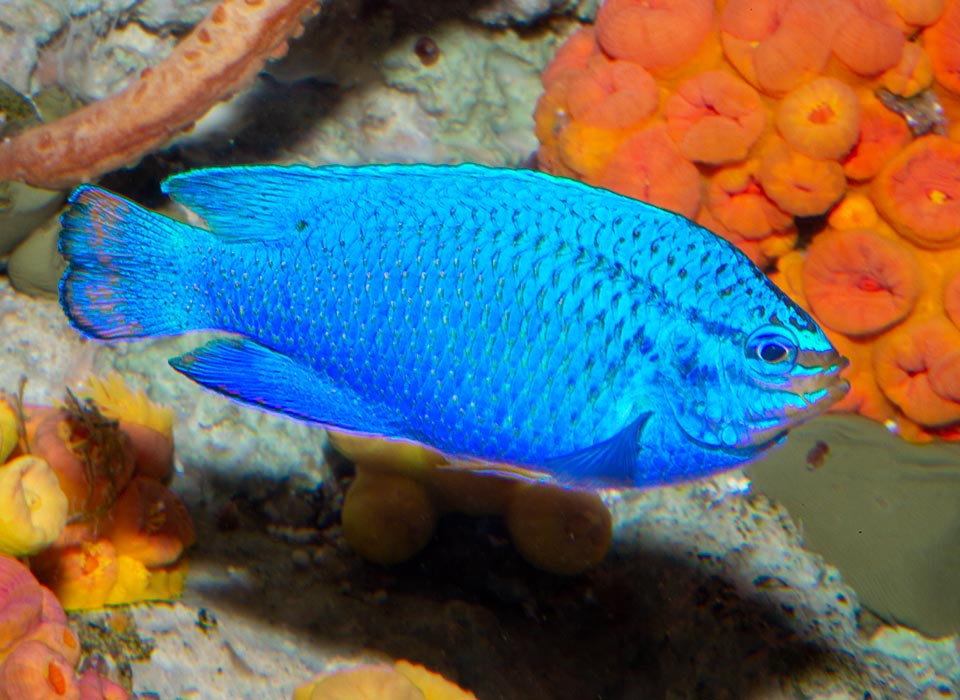 Very fast, ready to hide among the madrepores spikes if it sees a predator, is active during the day, eating zooplankton, tiny crustaceans and algae © Giuseppe Mazza

The Chrysiptera cyanea is a fish that well adapts to the life in captivity. Easy to feed and moreover little expensive it is frequent also in the small home aquaria; but as the vulgar name of Sapphire devil suggests, it can show very aggressive towards the companions of pool.

It is to be introduced last, when the other fishes have already made a territory, because if it is the first guest of the aquarium, possibly used as a guinea pig seen that it stands among the most robust and least expensive marine fishes of the market, it will consider the habitat as all belonging to it, thus attacking repeatedly and without any pity the new incomers, already stunned and weakened by the movement.

Even if present in all the shops of marine aquaria, sold for a few pennies in the web, the Chrysiptera cyanea its not nowadays (2020) an endangered species. 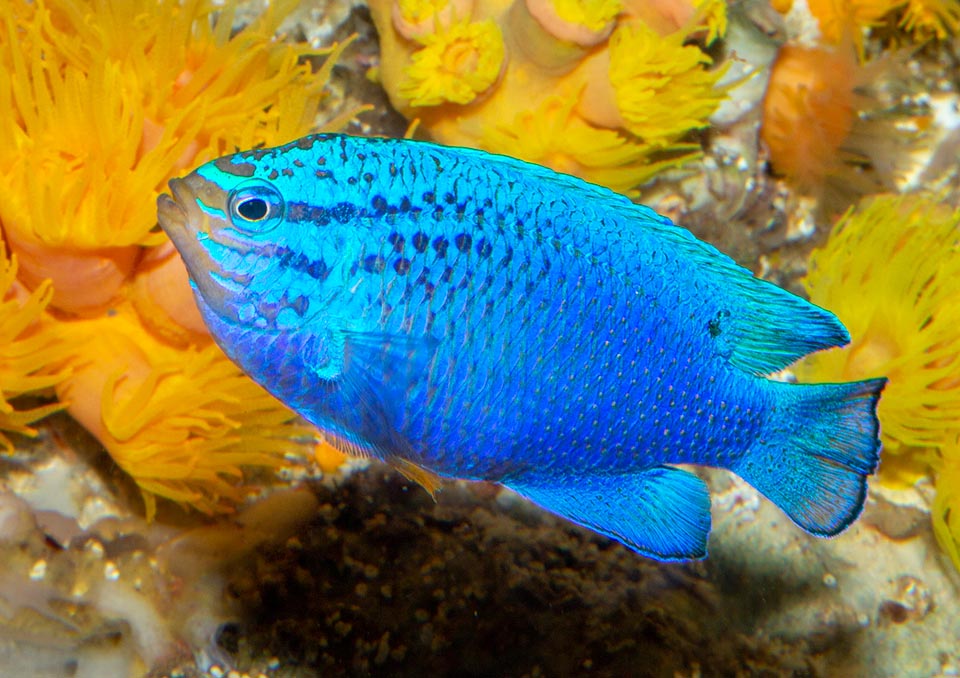 The eggs are glued to the bottom, surveyed and aerated by the male’s fin till the hatching. It stands among the aquarium marine fishes easiest to feed and least dear © Giuseppe Mazza

The populations decimated by the events can double their members in less than 15 months and the vulnerability index marks only 15 on a scale of 100.