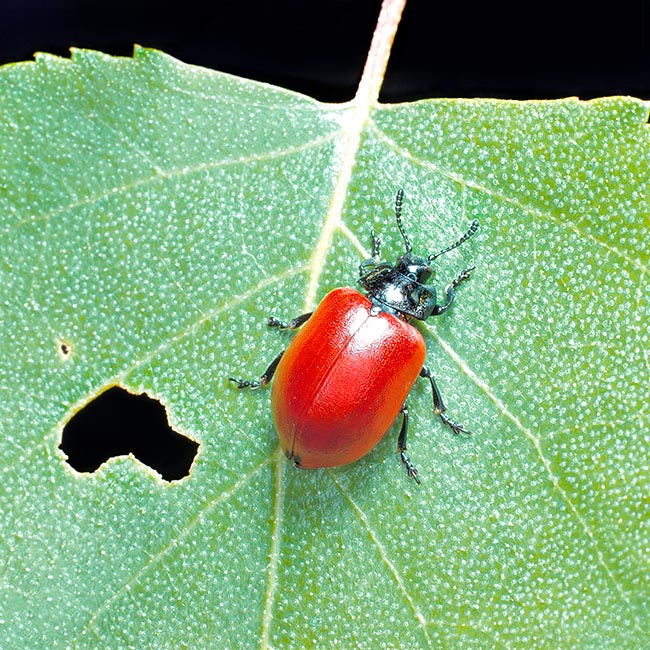 Its generic name comes from the Greek “chrysos” = gold, “melas” = black, whilst the specific one comes form the Latin “populus” = poplar, therefre in our case “of the poplar”, seen the characteristic defoliant action against this plant.

It belongs to the superfamily of the Chrysomeloidea, in its turn divided in several families among which the Cerambycidae, whose members are famous for having the antennae longer than their body, and Chrysomelidae.

To this last family, besides the poplar leaf beetle, belong more than 35.000 species of coleopterans, almost all phytophagous (in the past they were called Phytophaga that is plants eaters), of dimensions varying from 5 to 15 mm of length, with often lively and bright colours, with several cases of aposematism (animals informing with showy and precise colours the presence of poison in their tissues to the predators) and ovoidal shape like, just to give two examples, the infamous Colorado beetle (Leptinotarsa decemlineata) and the Scarlet lily beetle (Lilioceris lilii), often present in the gardens where attacks the lily leaves. They are animals able to hide wholly under their elytre legs as well as the antennae though remaining stuck to the leaves. 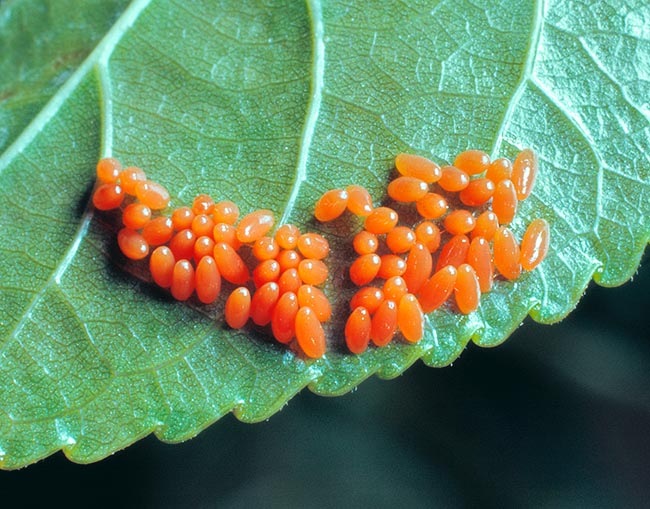 Generally looking, the family of the Chrysomelidae as as distinctive morphological characters the presence of antennae usually filiform or tending to be clavate and shorter than the body, formed by 11 antennomeres, and tarsi bilobed, in particular the second last.

This is due to the fact that between the presumed third and fourth tarsomeres there is another one, hidden, so small, because merged to the last tarsomere, to be invisible at unaided eye and distinguishable only at the optical microscope. Furthermore, it is not possible to observe it in dorsal section but not in the ventral one. It is not excluded that in a fairly next future this immense family may be subject to a drastic revision by the systematic zoologists through the interpretation of the molecular data, seen that it has not been revised for over fifty years.

The species is present in the Palearctic region, that is from Europe to Asia, Japan included. In short, it follows the same ecological distribution as the poplar and the willow to which is associated. 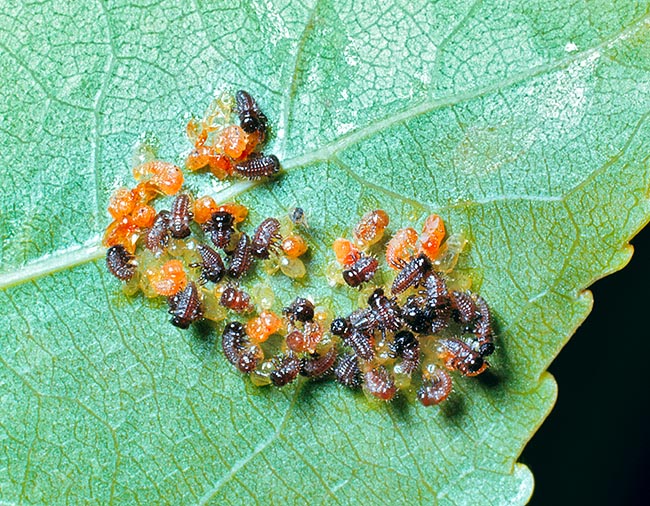 Depending on the climate trend there are 2-3 generations per year, exceptionally 4-5 © Giuseppe Mazza

The species, as said before, is found on the leaves of the poplar and more rarely on the willow. The adults and mainly the larvae, much more dangerous, in fact defoliate these plants.

For what the willows are concerned, it may infest Salix purpurea, Salix pentandra, Salix fragilis and Salix viminalis.

The adults have shape and size much similar to a ladybug, that is ovoid, about 10-12 mm long. The pronotum and the head, “flattened” against it, are black with greenish reflections, if exposed to the light, whilst the elytre are usually bright red, even if it is not difficult to find specimens of orange colour. The head, the thorax and the abdomen are black. The antennae, black, are formed by 11 antennomeres or segments, basically clavate; as a mater of fact, the last 3-4 antennomeres are slightly bigger than the first one adhering to the head. 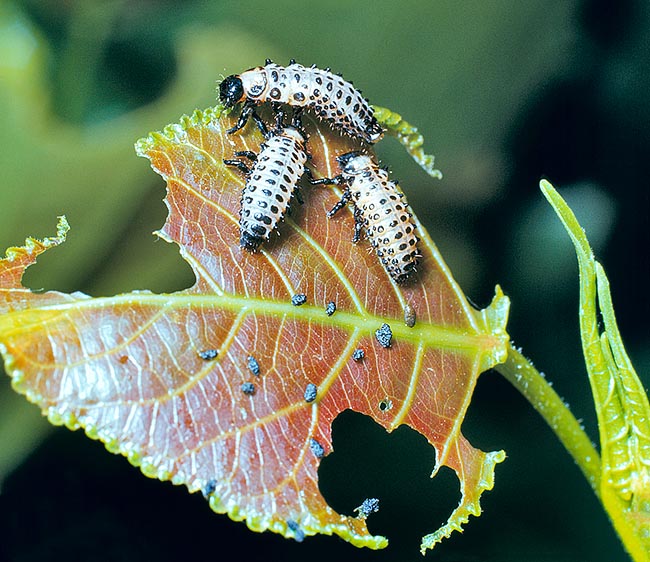 The tarsal formula is 5-5-5 though it may appear as 4-4-4 as already said. Moreover, the second last tarsomere is bilobed. Usually, the males are slightly smaller than the females.

The larvae, white with black dots spread all over the body, are oligopode or scarabaeiform (that is C shaped and with three pairs of legs), about 1-4 mm long. Head and legs are black. They do not have pseudolegs and are quite active deambulators: this allows them to move along all the foliar surface and to “devastate” it rapidly.

The adults reproduce in spring. They spawn in the lower page of the leaves forming real and proper masses of 20 to 58 eggs strictly close each other.

The eggs are red-orange, ovoid, elon- gated and fusiform. Various researches in the agricultural field have evidenced that some females are able to deposit up to 65 eggs per mass and also on the upper page of the leaf.

As an average, the eggs are 1,8 mm long and 0,75 mm broad. The colour of the eggs tends to become darker while the larvae develop inside them. Usually, the period of oviposition, the one where the females realize more masses, lasts an average of about 41 days, whilst the incubation time is of about 6-8 days. 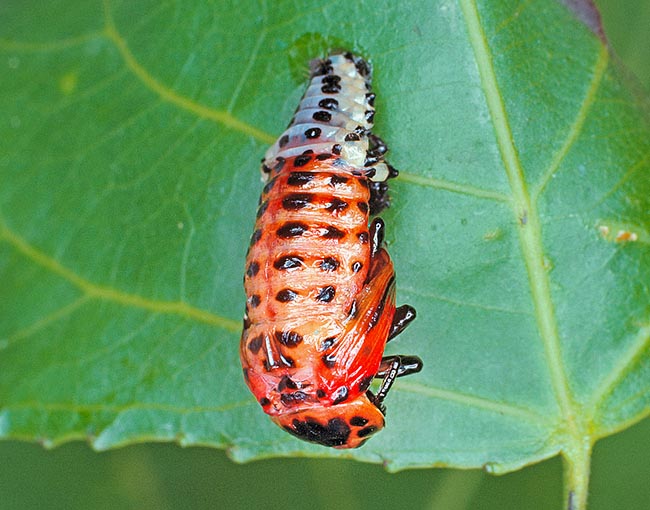 The pupae hang head down on the leaves. Here an adult birth © Giuseppe Mazza

The larva, once gotten out from the eggs, attacks immediately the leaf on which has been laid, devouring, when the attacks are heavy, also the nervations with deadly outcomes.

Within a week the larva metamorphoses: usually the pupa hangs literally from the leaf with the final part of the abdomen. Usually, we get 2-3 annual generations, but sometimes even 4 or 5 in particularly favourable conditions of temperature, humidity and availability of trophic ressources.

In most cases, therefore, during the summer the first and the second generations successfully complete their cycle, whilst the third one will unlikely be able to metamorphose.

In fact, the larvae do not bear the low temperatures and pass away by the first winter colds.

The adults live even 2 months and hibernate under the litter, the poplar bark or at several centimetres in the subsoil. 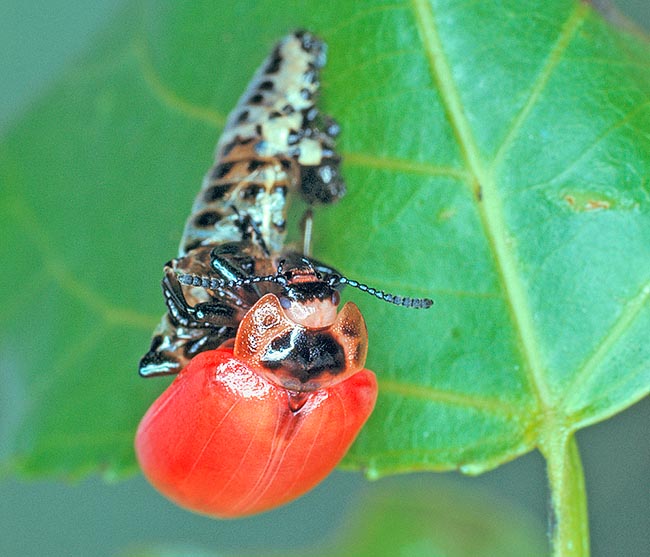 The attack to the poplar done by the poplar leaf beetle is often “heavy” seen tha the leaves frequently get the double attack by the adults and by the larvae with much serious and evident damages that weaken the plant against the physical attacks, such as the wind or the rain, and render it easily vulnerable to infective, often mortal, attacks.

Particularly exposed are the young plants or those used for agricultural purposes: not surprisingly the most accurate researches on the poplar leaf beetle have been done and published by agricultural origanizations or univer- sities.

Historically, the fight against the poplar leaf beetle has always been of chemical type: during the 19th century they used arsenicates, then, from the second world war onwards, they passed to the massive use of the DDT. When DDT has been banned by the OMS, they have introduced other more efficient products, such as synthetic pyrethroids and acylurea derivatives, which are more lasting and less harmful than DDT and arsenates.

During the last years they are trying to introduce a biologically based fight, even if this is not easily doable in respect to the chemical one. It has been noted that the larvae and the eggs may be attacked by parasitoid hymenoptera and that thanks to the bites of the ants, potential predators of the larvae, it may be diffused the Bacillus thuringiensis subsp. tenebrionis that leads them to certain death. Like all harmful insects, the larval phase is more important one than the adult one and it is on this one that the efforts for fighting it are concentrated.