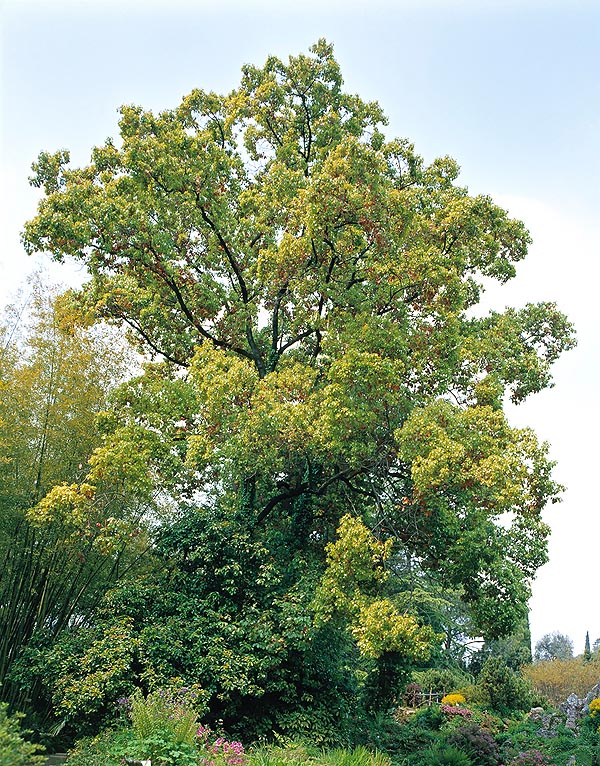 The Cinnamomum camphora may be 40 m tall. The young leaves are purple red © Giuseppe Mazza

This species is native to Japan (Honshu, Kyushu, Ryukyu Islands and Shikoku), and Taiwan, where it lives in the forests in zones with warm temperate and subtropical climates with an annual rainfall between 1000 and 3500 mm.

The name of the genus comes from the Greek name of the essence of cinnamon “kinnamomon”; the name of the species is the relevant essence Latin name, “camphora” = camphor.

The Cinnamomum camphora (L.) J. Presl (1825) is a magnificent evergreen tree, up to 40 m tall, with short and massive trunk, which, in the oldest specimens, may almost reach the diameter of 4 m, with greyish brown bark deeply fissured longitudinally, ample canopy and a vast root apparatus; the young branches are brown or pinkish.

The leaves, on a 2-3 cm long petiole, are alternate, coriaceous, from ovate to oblong-lance shaped, with acuminate point and usually waved edges, 4-12 cm long, of a colour varying from pale to intense green colour, glossy, with three (five) yellowish venations; the new leaves are purple red coloured.

The fruit is a 6-8 mm of diameter globose drupe, blackish violet when ripe, containing only one seed of about 5 mm of diameter. All parts of the plant emit a string scent of camphor, especially when cut or damaged. 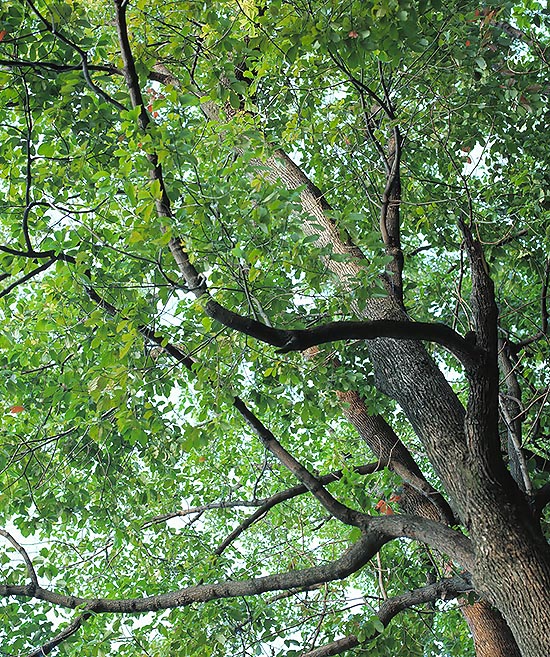 It usually reproduces by seed which must be planted within few months as it does not hold a high germinating power, the germination takes usually place in a month at the temperature of 22-26 °C; in order to reduce the times, it is convenient to keep the seeds, once cleaned up, in water for one day.

The reproduction by root suckers is possible too.

It is a fast growing plant suitable to tropical, subtropical and warm temperate climate zones in full sun, or partial shade when young, on neutral or slightly alkaline soils, possibly sandy and well draining, especially in the highly rainy zones, as it does not bear the stagnating water.

The adult trees may survive to temperatures as low as -10 °C, but the green parts, as well as the young plants, get irreparable damages with temperatures just below 0 °C and the branches by -6 °C.

It is utilized as shade tree in parks and large gardens, but we must keep in mind that it is a potentially invasive plant with an aggressive rooting system, especially where the environment conditions are favourable.

The tree is cultivated since remote times thanks to the fragrances it supplies.

The essential oil is the distillate of the leaves, roots and wood; the camphor, which is separated from the oil during the distillation process, appears as a white, crystalline and translucent substance which evaporates at ambient temperature.

The essential oil contains in high quantity a toxic and carcinogenic agent, the safrole, also present in other vegetables utilized in the food industry in small quantities. Since time, the safrole has been forbidden, but that naturally contained, but with concentration limits in the final products. 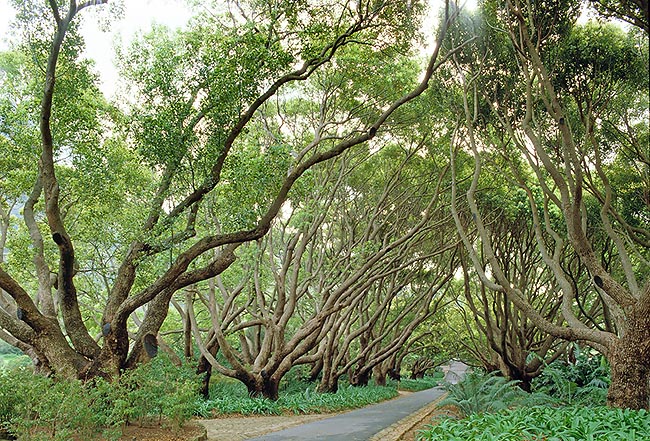 In the past, the camphor has been utilized as an insect repellent and the camphor oil was quite commonly used in medicine, nowadays its utilization is much reduced and limited, in some countries even forbidden, due to its toxicity; many poisoning cases are known, even serious, caused by ingestion at very low dosages of camphor oil or of other produces containing camphor.

The camphor nowadays utilized for medical purposes is the “white camphor”, the lightest fraction obtained in the fractional distillation of the essential oil, which does not contain safrole, and therefore is little toxic and may be used, even if with caution, especially foe external use (liniments); the heaviest fractions, brown and yellow, contain the 80% to almost all quantity of safrole.

The camphor is presently industrially produced by synthesis, but some components of the natural essential oil are still utilized in the cosmetic and in the dye industries. The wood, of a reddish colour with dark moiré patterns, fragrant and fairly resistant, is also utilized for furniture and for the interiors of boats. 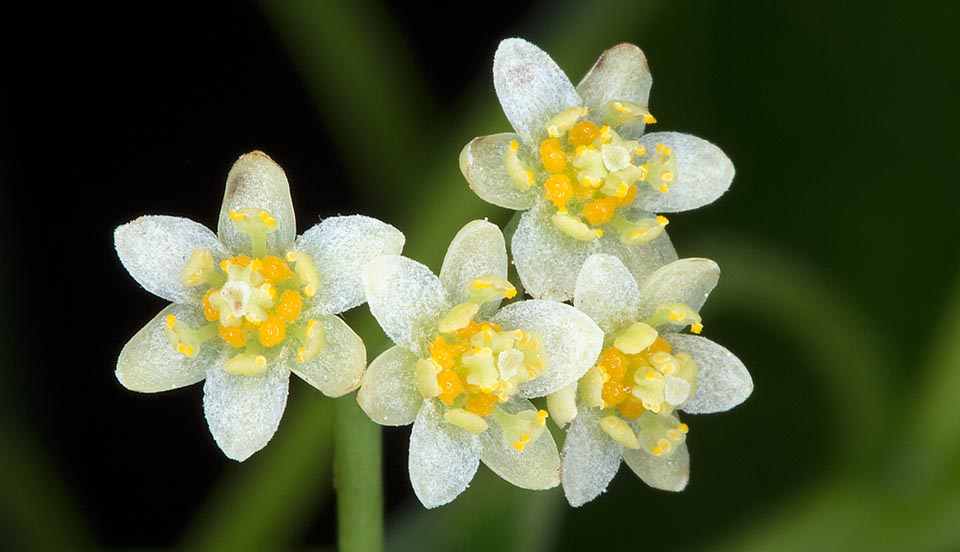