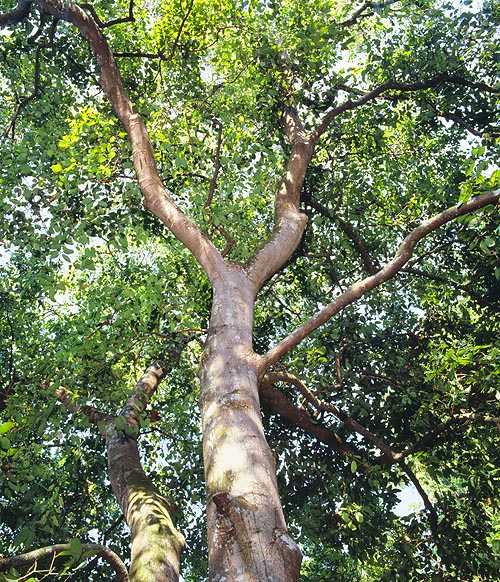 The Cinnamomum verum may be even 20 m tall © Giuseppe Mazza

This plant is native to Sri Lanka where it grows in the pluvial forests, mainly between the 300 and the 1000 m of altitude.

The name of the genus is the Latinization of the Greek name of the cinnamon essence “kinnamomon”, derived, in its turn, after Herodotus (c. 484 BC – c. 430 BC) from the Phoenician, but, more likely, from the Arabic, seen that it was that the Arab merchants who carried the spices to the banks of the Mediterranean.

The name of the species comes from the Latin adjective “verus, a, um” = true, for distinguishing it from the other species of the same genus, such as the Cinnamomum cassia, from which they get a produce of lower quality.

The Cinnamomum verum J. Presl (1823) is a medium sized evergreen tree, with numerous branches, often pendulous, up to about 20 m tall.

When cultivated is however maintained as a bush and usually does not exceed the three meters.

The bark of the young branches is soft and of pale brown colour. The leaves, of variable shape and size, on a short petiole, are opposite.

They are coriaceous and strongly aromatic, 7-20 cm long and 4-8 cm broad, lanceolate, elliptic or ovate with acuminate tip and entire margin, of a colour varying from the pale to the glossy intense green. They have three (or five) typical major nervations departing from the base and joining at the apex. 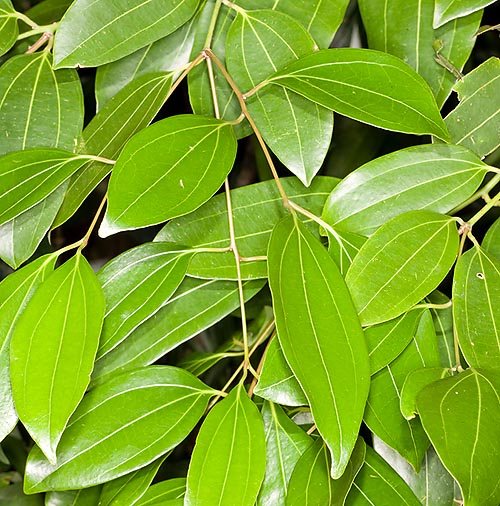 The young leaves may be green, red or dark purple.

The panicle inflorescences are terminal or axillary on cream white peduncles, up to about 10 cm long, carrying tiny yellowish white or cream white flowers of 3 mm of diameter.

The fruit is an ovoid drupe, 1,2-2 cm long and of blackish purple colour, containing one brown seed.

It usually reproduces by seed which is to be planted immediately, as it has a short germination time (about 40 days), on a soil rich of organic substance with 30-40% of sand. The seeds germinate in 2-3 weeks.

If we want to be sure to keep a particular variety, we have to utilize the vegetative reproduction, by cutting, but it presents rooting difficulty.

It is easier to proceed by air layering, and, in recent times, by micro propagation.

It is a species suitable for humid tropical climate with a rainfall exceeding the 2000 mm distributed almost regularly all over the year.

In those with marked seasonality, and even more in subtropical climate, the quality of the products obtained is surely lower and its cultivation is done mainly for ornamental purpose.

With the same finality, the cultivation may be marginally tried, in sheltered location, in the milder warm temperate zones, where the temperatures close to the 0 °C are short lasting exceptions. 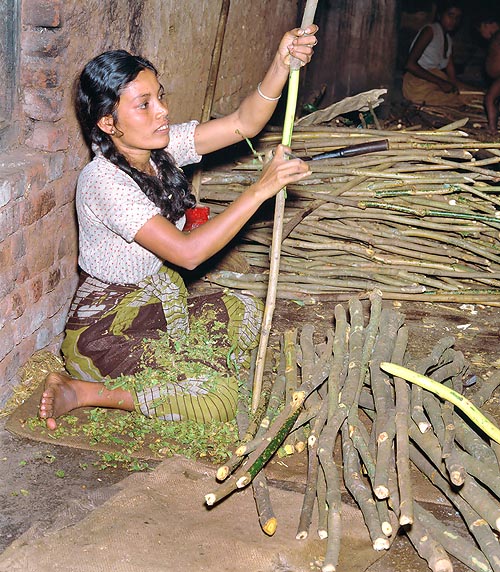 The cinnamon, utilized since remore times as spice, is gotten from the bark © G. Mazza

It is not particular about the soil, but it grows better in the sandy and perfectly draining ones, as it does not stand the stagnating water. Even if it is a tree which in the wild grows in the forests, it grows well also without any shadow.

The cinnamon, utilized as spice since remote times, as well as medicine in the popular medicine for an ample variety of pathologies, and as perfume, is the dried bark, freed of the superficial part and commercialized in 5-8 cm long cylinders, composed of more pieces of bark rolled one onto the other, or reduced in powder.

The oil of cinnamon is extracted from the bark and the leaves and is utilized in the food industry for aromatizing countless produces, such as preserves, drinks, sweets and various dishes; it is furthermore utilized in the cosmetic industry and, in some extent, in the pharmaceutical one.

The oil extracted from the leaves is formed for about the 80% by eugenol which has also antiseptic and antioxidant properties, whilst that obtained from the bark is formed for the 65% by cinnamaldehyde.

For the production of the cinnamon and the oil extracted from the bark, the plants are pruned low in order to get them tillering.

The collection of the bark is done by the fourth, fifth year from the planting when the branches have a diameter around the 2-2,5 cm, lower diameter give a poorer yield, but of better quality; the branches are cut almost at the level of the soil and the following harvest is done after one year or so.

For the extraction of the oil from the leaves, these last are collected, along with the tender shoots, once or twice a year and dried up in the shade for one day before proceeding to the distillation. 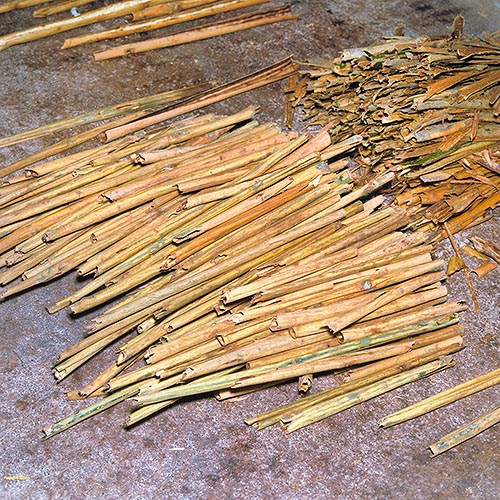