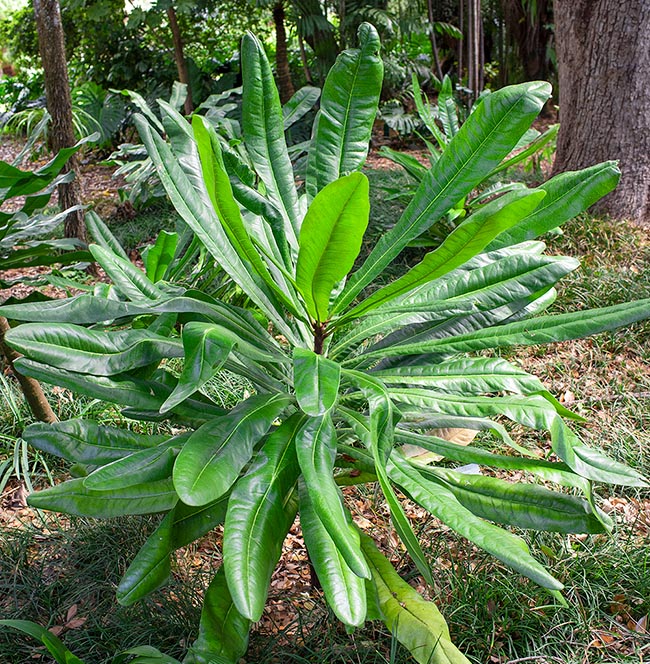 The species is endemic to Haiti where it grows on the Massif de la Hotte; in the north-western peninsula, in the semi-arid thicket on calcareous soils, between 250 and 500 m of altitude.

The genus is dedicated to the Spanish writer, historian and botanist José de Viera y Clavijo (1713-1813).

The name of the species, the Latin adjective “domingensis” seems to refer to the capital of the Dominican Republic, Santo Domingo, where are present several specimens in the National Botanical Garden.

The Clavija domingensis Urb. & Ekman (1929) is a shrub with erect stem rarely ramified, that can reach the 8 m of height and of 20-30 cm of diameter, with wrinkled bark, slightly furrowed longitudinally, of brown grey colour, and a thick crown at the apex.

The leaves, on a 2-5 cm long petiole, are alternate, simple, spatulate with rounded apex, entire margin and prominent central vein in the lower page, 0,8-1,10 m long and 9-15 cm broad; coriaceous, of intense green colour and glossy above, opaque below. 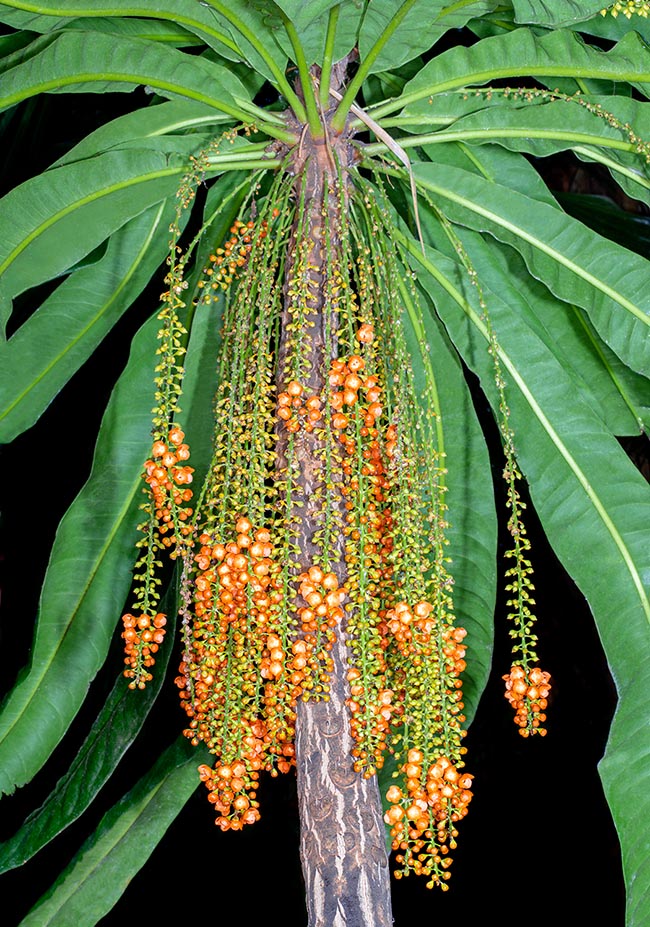 Relative to primroses, vaguely reminds the palms with a stem that can be 8 m tall and of 20-30 cm of diameter © Giuseppe Mazza

Hanging racemose inflorescences under the crown, 50-65 cm long, with numerous flowers, of about 1,5 cm of diameter, that open in succession, with a calyx having 5 ovate lobes, a crateriform corolla with 5 oblong to orbicular petals, fleshy, of a luminous orange colour, 5 stamens, unilocular ovary and short style.

The fruits are globose berries, of about 1,5 cm of diameter, initially green, then orange when ripe, containing few globose seeds immersed in a fleshy pulp of pleasant taste.

It reproduces by seed in draining loam maintained constantly humid at the temperature of 24-26 °C, with germination times starting from 2-3 weeks.

Rare in nature, where is unluckily reduced to a few tens of specimens, and even more in cultivation, present out from the site of origin only in few botanical gardens and private collections, of unusual shape, that vaguely reminds a palm, and particular elegance due to the erect stem, the thick crown and the coloured inflorescences.

Of rather slow growth, it needs a tropical or subtropical climate, as it does not bear temperatures slightly under the +5 °C, if not exceptional and short lasting.

Due to the extremely reduced number of specimens, few tens, dispersed and fragmented, in constant decrease due to the expansion of the agriculture and the indiscriminate felling of the forest, this species has been inserted into the red list of the IUCN (International Union for the Conservation of Nature and Natural Resources) as “Critically Endangered” (at extremely high risk of extinction in the immediate future).

Racemose inflorescences hanging under the crown, of 50-65 cm, with flowers of about 1,5 cm of diameter opening in succession. Edible fruits © Giuseppe Mazza