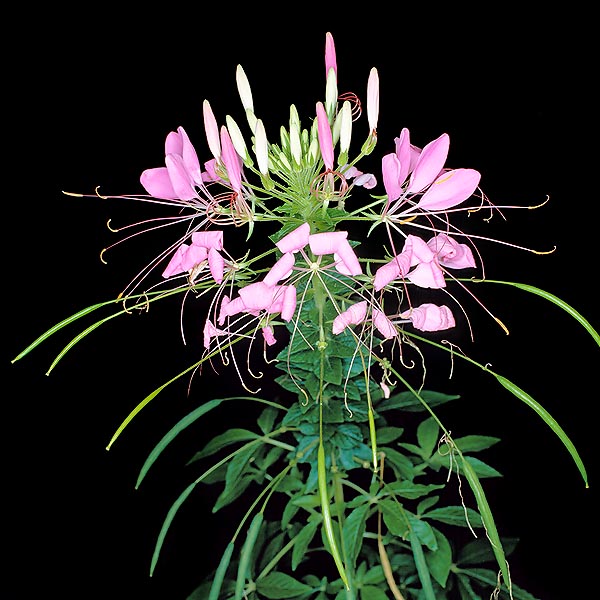 The plant is native to tropical South America (Argentina, Bolivia, Brazil and Paraguay), where it preferably grows along the banks of the rivers.

The origin of the name of the genus is uncertain; the species is honoured to the Swiss collector and botanist Émile Hassler (1861-1937).

La Cleome houtteana Schltdl. (1851) is an herbaceous plant usually cultivated as annual, 70-140 cm tall, often ramified at the base, with slightly thorny and glandulous-pubescent, that is with hairs, called glandular, provided at the apex of a gland secreting an often viscous substance.

It has alternate palmate-compound leaves with 5-7 oblong-lanceolate leaflets, with slightly indented margins, long from 2 to 10 cm and 1 to 3 cm broad; towards the apex of the stem, where the inflorescence develops, the leaves become entire and small, long up to about 4 cm; also on the leaves are present, both above and below, glandular hairs which emit a strong scent, which is, for some persons, almost unpleasant.

The inflorescences, in thick racemes of 15-17 cm of diameter, are terminal and get long, in the succession of the flowering, up to 50 and more cm; the single flowers, on a 2-5 cm long peduncle and produced in sequence for 2-3 months, have 4 thin petals, about 3 cm long and 1 cm broad, of variable colour, white, pink or lavender, depending on the variety, and six, 5-7 cm long, filaments.

The fruit is a dehiscent capsule (in the sense that when ripe it opens spontaneously on the plant), 4-10 cm long and with a diameter of 3-4 mm, containing 10 to 20 reniform or discoid seeds, about 2 mm long and broad, of a dark brown, semi-glossy, colour. It reproduces by seed in spring; if sown in a protected environment at a temperature of 18-20° C, the germination takes place in 10-12 days and the flowering will begin after 80-90 days; the seeds may be placed directly in the ground after the possible last frosts, in which case the blooming will start by mid-summer. It often self-disseminates, and for this reason it is considered as a potential pest in mild climates, it has already colonized, escaping from the cultivation and naturalizing, vast areas in several parts of the world.

Plant cultivated since three centuries with mixed fortunes, in great fashion during certain periods, almost forgotten in others, like by the second half of the ‘900, but from the beginning of this century it looks like the interest for its several varieties has woken up again. It may be cultivated in an ample choice of grounds, with the only condition of having a good drainage as it is rather sensitive to humidity stagnations in the soil. Exposition possibly in full sun or slight shade, in case during the afternoon hours; the watering must be regular, even if, once well rooted, it can stand short periods of drought. It can be utilized for flower-beds, isolated groups, but especially as background; it adapts also to the cultivation in pot, provided the same is large.

→ To appreciate the biodiversity within the CLEOMACEAE family please click here.