The species is native to the Bismarck Archipelago, Borneo, Java, Malaysia, Moluccas, New Guinea, Solomon Islands, Sulawesi and Sumatra where it grows in the humid forests as well as in open and disturbed areas, from the sea level up to about 1500 m of altitude.

The name of the genus is the combination of the Greek terms “κλῆρος” (cleros) = fate and “δένδρον” (dendron) = tree, name given by Johannes Burman (1707-1780), resumed by Linnaeus, to a plant that in Ceylonese was called “pinnacola” = unlucky; the name of the species is the superlative of the Latin adjective “speciosus, a, um” = beautiful.

The Clerodendrum speciosissimum Drapiez (1836) is a ramified evergreen erect shrub, 1-4 m tall, with branches of almost quadrangular section, slightly pubescent. The leaves, on an up to 20 cm long pubescent petiole, are simple, opposite, decussate, cordate with acute or acuminate apex, crenate margin and veins sunken above, prominent below, 10-32 cm long and 8-25 cm broad, of glossy dark green colour above, paler below, and covered by short and light hair. 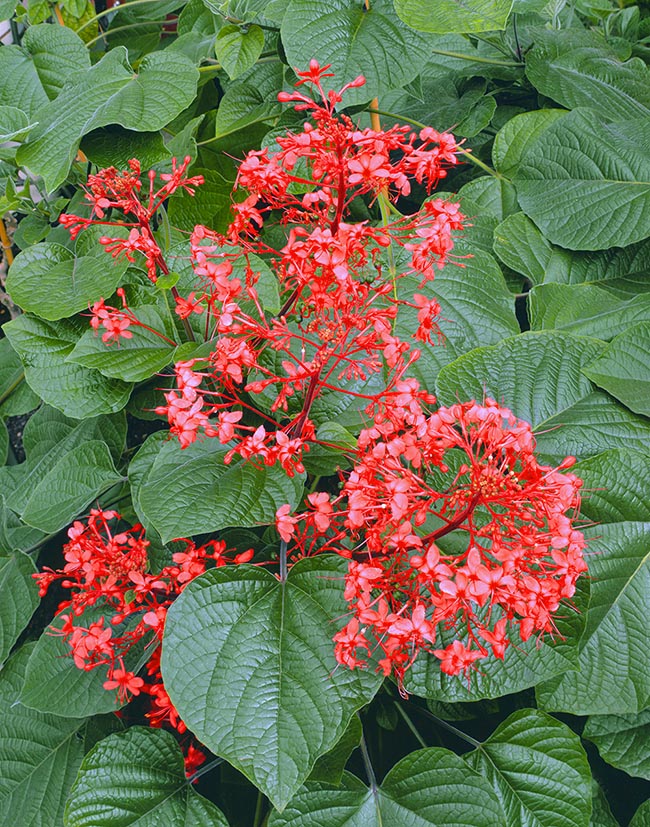 The Clerodendron speciosissimum is an evergreen ramified shrub of south-eastern Asia that reaches the height of 4 m. Cultivated for its flowers in the tropical gardens, it reveals some times a very invasive plant © Giuseppe Mazza

Panicle terminal inflorescences, on an about 4 cm long peduncle, erect, 15-35 cm long, of red colour, with a crowd of flowers, of about 3 cm of diameter, odourless. Five toothed campanulate calyx, 4-6 mm long, of red colour, hypocrateriform corolla (with lobes stretched perpendicular to a long thin tube) of scarlet red colour, corolline tube, 2-2,5 cm long; with 5 obovate lobes, 1,5-1,7 cm long, and 4 stamens of the same colour protruding from the corolla, together with the style, for a length of about 3 cm. The fruits are slightly flattened quadrilobate drupes, initially green, then red and finally blackish blue, 1-1,2 cm long.

It propagates by seed, previously scarified and kept in water for 1-2 days, in draining loam maintained constantly humid, but without stagnations, at the temperature of 26-28 °C, by semi-woody cutting in spring-summer and through radical sprouts.

Species diffused in the tropical and subtropical gardens as ornamental due to the scarlet inflorescences produced from late summer to autumn and the large velvety leaves, its cultivation may be tried in sheltered position in the mildest temperate-warm zone, where temperatures around the 0 °C are short lasting exceptions, with loss of the leaves in winter and at times of all the aerial part, but vegetating again from the base in spring. Due to its speed of growth it can be cultivated also as annual with autumnal blooming.

It preferably requires the full sun or a slight shading, it adapts to an ample variety of soils, and well rooted it bears short dry periods, even if it grows better if regularly irrigated in the zones characterized by warm and dry summers, and bears well the pruning for a more compact posture. In the least favourable climates it can be cultivated in pot to be sheltered in winter in a particularly luminous protected environment, aerated, utilizing a loam rich of organic substance with addition of 30 % of coarse siliceous sand or agricultural perlite for a good drainage, with lowest temperatures not under the 14 °C.

Due to the facility with which disseminates and reproduces in vegetative way, in some tropical and subtropical countries, where has been introduced for ornamental purposes, it has escaped cultivation naturalizing and at times behaving as a weed.

By some botanical institutions the species has been attributed to another author, C. Morren, who has published it in the same year (1836) as P.AJ. Drapiez.