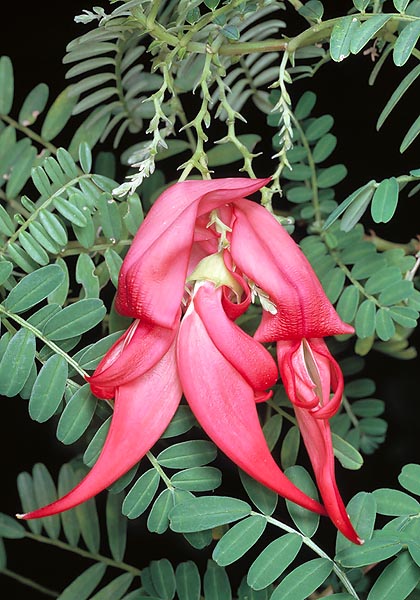 The Clianthus puniceus is highly endangered in the wild © Giuseppe Mazza

This plant, almost extinct in the wild, is native to the temperate and subtropical zones of New Zealand (North Island), where few specimens grow on sunny slopes or along the banks of lakes and rivers.

The name of the genus is the combination of the Greek words “kléos” = glory and “anthos” = flower, with reference to the showy flowers; the name of the species is the Latin adjective “puniceus” = purple, with obvious reference.

The papilionaceous flowers, united in number of 6 to 20 in axillar, pendulous, 15 cm long, racemes, bloom in spring-summer and at times also in autumn; they are 8 cm long, of red colour. Pink and white varieties do exist; the pollination is done by the birds.

The fruits are 8 cm long, cylindrical, pods, of blackish colour when ripe, and contain several seeds. It propagates by seed, semi-woody cutting in summer and by air layering.

Before placing them in the ground, the seeds must be slightly scarified by passing them on sandpaper in order to diminish the outer hard and waterproof tegument, and left in water for some hours; otherwise they may be kept in water for 24 hours. A soil soil for sowing may be utilized with addiction of sand or agri perlite, by around the 30%, constantly kept humid and at a temperature of 20-24 °C; the germination begins after 30 to 40 days, the blooming by the second year of age.

It is considered as New Zealand’s most ornamental shrub due to the foliage which reminds that of the ferns and the showy flowering; it requires a subtropical and warm temperate climate. It may resist, for a short time, to temperatures as low as -5 °C; in the cooler climates its cultivation may be tried in the shelter of a wall facing south (in the northern hemisphere, north in the southern one) and with a good mulching at the foot of the plant; it does not appreciate persisting too high temperatures, by around the 30 °C and more.

It prefers a sunny location, at most a slight shade in the afternoon hours, and is not particular about the soil, provided the same is well draining; the watering must be regular in summer, during the dry periods, but allowing the superficial substratum to dry up before giving water again.

By the end of the flowering, it is good to remove part of the oldest stems and to shorten the other ones in order to stimulate the growth of new vegetation for the next blooming. The leaves are particularly appreciated by snails and slugs which, therefore, may cause serious harm. In the places where the climate does not allow the permanent open-air cultivation, it may be cultivated in pot which is to be placed in greenhouse, winter gardens or spacious verandas, in a soil ould rich in humus with addition of sand or agri perlite in order to improve the drainage, in very luminous position; the watering must be frequent in summer, reduced in winter.

The International Union for Conservation of Nature (IUCN) has placed the Clianthus puniceus among the species at very high risk of extinction in the wild for the forthcoming future (Endangered).