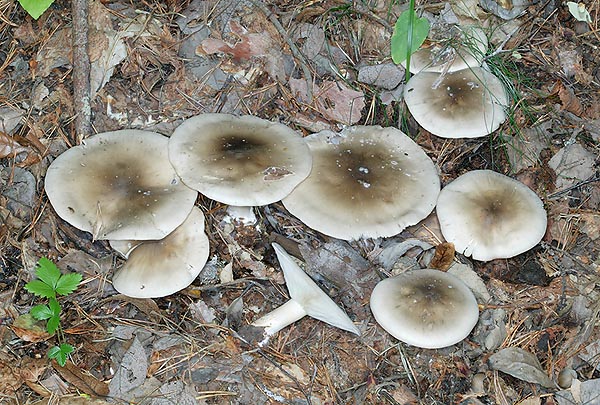 A fungus which, even if deemed edible, may cause gastric problems © Giuseppe Mazza

The etymology of the name comes from the Latin “nebula” = mist, related to the mist.

To the genus Clitocybe belong carpophores having as main characteristic the cap slightly umbilicate and decurring gills.

The cap is usually dry, rather scaly, pruinose, glassy, hygrophanous; the margin is mostly smooth, striated for transparence in the hygrophanous species. The stipe is usually full, smooth, fibrillose, often with abundant mycelium at the base, and, at times, with rhizomorphs. The spores are smooth, not amyloid, at times cyanophilous. The gill structure is parallel, joint buckles are often present, cheilocystidia are absent. The spores in mass are white, yellow or pink-cream. In the genus Clitocybe, many species cause even serious intoxications, with muscarine, coprine, gastrointestinal, haemolytic, agromelalgic syndromes. Very few species are edible.

The fungi belonging to the Subgenus Disciformes have a small to big cap, hygrophanous at times, more or less pruinose, usually not striated for transparence, even if hygrophanous, from flattened to infundibuliform when old, from greyish to dark brown, from whitish to cinnamon. Stipe with tomentose base and, sometimes, with rhizomorphs. Adnate to decurrent gills, white, grey, or tending to brown. Variable fungoid smell, fragrant, floury or complex, often persistent also in exsiccati. Gentle taste, fungoid, floury at times. Spores small to very big; white or pale yellow spores in mass. Pigment present or absent in the hyphae of the cap. Growing both in woodland and its margins, in different types of litter, rarely on the bare soil, often on calcareous lands; present all the year round, especially in summer and autumn.

To the Section Disciformes are ascribed fungi with big cap, not hygrophanous, white, whitish, grey or brown-grey, greyish tending to brown, brown; flesh thick at the disc, robust stipe, fleshy or fibrous-fleshy. Smooth spores, amyloid or not, joint buckles present or not. 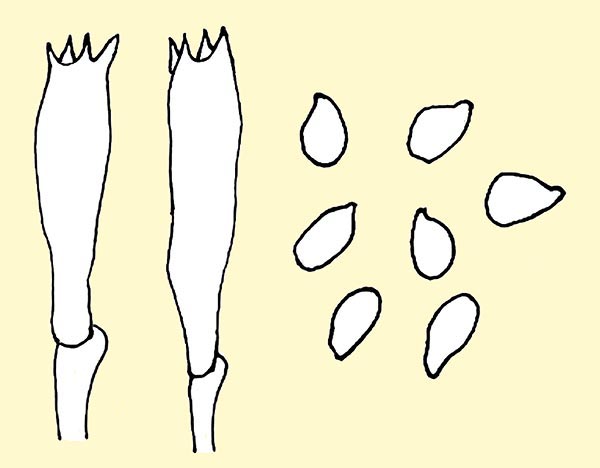 Hymenium: thick gills, adnate, decurrent in the adult fungus, intercalated by lamellulae, whitish then cream, detaching easily from the flesh of the cap.

Stipe: 2-12 x 1,5-3 cm, club-shaped at the beginning, then cylindrical, but always with enlarged base, robust but frail, full then hollow, paler than the cap, with thin longitudinal fibrillae and base covered by a mycelial white down.

Habitat: it grows on the litter of leaves in every type of wood, in lines or groups of numerous gregarious specimens, even in late autumn, very common.

Edibility: it is a fungus which, even if considered edible, can cause gastric problems. It is to be cooked for long time or placed in boiling water for short time, as containing thermolabile toxins, nevertheless, it is not tolerated by everybody. Should it cause intoxications, the gastrointestinal syndrome is of short incubation; the symptoms reveal from less than one hour up to 4 hours after consumption. The toxicity of this species is variable.

Observations: It is a very known fungus, widely consumed in some areas, even if recent studies have shown that it is not tolerated by all. Its particular and intense smell, which often is sufficient for identifying it, can cause drowsiness if breathed in a close space. It can be mistaken for the Entoloma sinuatum (Bulliard : Fries) P.Kummer, which has the same, or almost the same, colour of cap, but is terricolous, the stipe is full, smells of flour and, above all, its gills are homogeneous and pink when ripe.

Remark: Clitocybe nebularis is a species which has all the characters of the Lepista. As a matter of fact, some authors place it in this genus, but, as Clitocybe nebularis is the nomenclature typus of the genus Clitocybe, if we keep faithful to the Code of Botanical Nomenclature, it is absolutely impossible to ascribe this species to the genus Lepista. Therefore, even if the macro-microscopic characters tell us that it is a Lepista, it remains a Clitocybe.