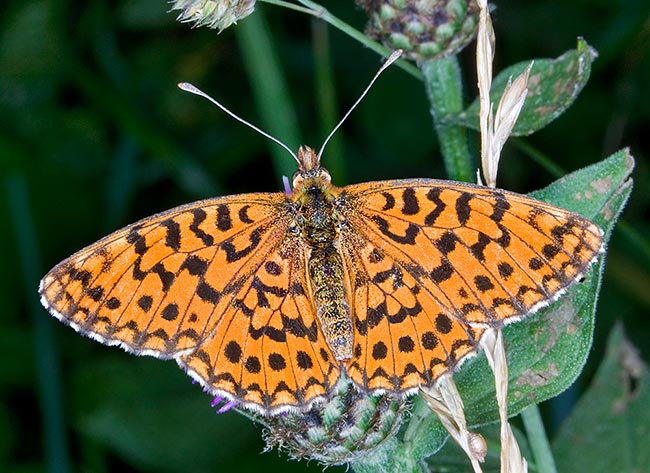 The Weaver’s fritillary (Clossiana dia Linnaeus, 1767) belongs to the order of the Lepidoptera and to the family of the Nymphalidae.

As already previously said in this family are usually included more than 6.000 species of butterflies scattered all over the world, consequently it is deemed as the most consistent among those grouping the diurnal lepidopterans.

It is a butterfly very similar to those belonging to the genus Melitaea, Boloria and Brenthis with whom it shares the colour as well as the habitat and are therefore easy to be mistaken among them. In this respect, please see Clossiana titania.

The butterflies of the genus Clossiana have usually a more nervous flight, with very fast and deep beating of wings, spaced by very frequent and short glides at high speed.

Also the sizes unite them to the Melitaea but upon a closed analysis they show on the wings rather different drawings. All Clossiana have on the upper face marked and big black and round dots and almost never they show that grid so typical of the Melitaea. The lower face of the rear wing is then determinant for the subdivision of the two genera: different colours and characteristic drawings make a peculiar indication.

Many situate the genus Clossiana in that of Boloria which however remains indicated among the scientific synonymous names of this species. Clossiana comes from the name of Closson, a Belgian musicologist of the 19th century to whom Reuss 1920, dedicated this genus of butterflies. The species dia comes from the old name of the Naxos Island or from the term “diva”, a heavenly goddess which appears to be the daughter of Deioneus and wife of Ixion. The scientific name Boloria is instead connected with a rather particular interpretation given by Moore in 1900. Derived from the Greek “bolos” = fishing net, to indicate the reticulated drawing on the wings, particular somewhat inappropriate seen that, as we shall see, when looking well, the wings carry only one remarkable series of dots and spots but is absolutely absent whatever grid.

The common names given to this butterfly are: Magerrasen (or Hainveilchen) Perlmutetrfalter, in German; Paarse parelmoervlinder, in Dutch; Donzela violeta, in Spansh; Petite violette, in French; and Wearver’s fritillary or Violet fritillary, in English. The name given in England to the Weaver’s fritillary is dedicated to Richard Weaver a dealer of insects of the 19th century who collected and classified the first this butterfly in the United Kingdom. 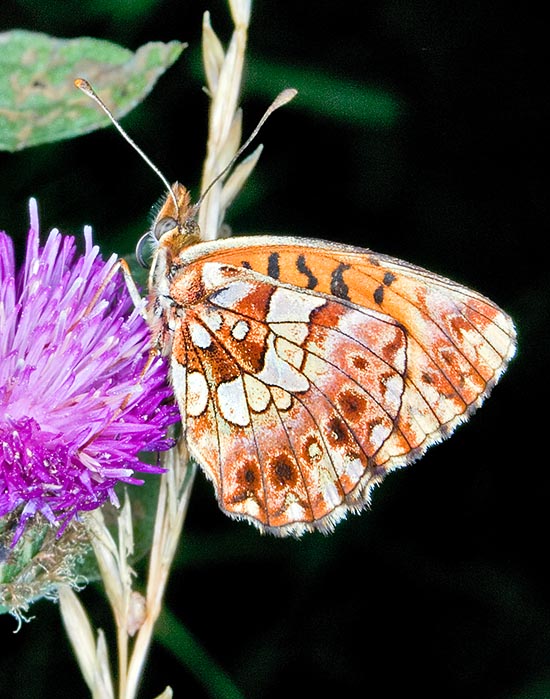 It loves sunny and grassy fields, open woods and hilly zones up to 1400 m of altitude. Always moving, is difficult to approach and usually does not go back to the already visited flowers © Giuseppe Mazza

This butterfly is common in Europe even if totally absent in England and in the northern regions. Also in the extreme southern regions it is often absent or present in fairly reduced number and colonies.

It is a Euro-Asian species and goes following the temperate belt, through Turkey, the Caucasus, and the Caspian Sea, up to Mongolia, Siberia and northern China.

It loves the sunny and grassy meadows, open woods and hilly zones up to 1400 m of altitude.

The Weaver’s fritillary is a small butterfly with an about 34 mm wingspan and who does not show particular distinction between the sexes if not for a slight heaviness in the alar drawings in the female.

Like all fritillaries, it flies for long periods, starting in April up to late October.

It is orange brown and this characteristic renders it similar to many other species sharing its habitat.

The upper face of the fore wings is distinctly marked by black drawings of various shapes with a series of round black and lined spots which run along the whole post-discal area from the rib to the back margin. The same series continues in a more marked way on the rear wing with six well defined spots totally surrounding the alar surface.

In the basal area of the rear wing, it has a blackish and diffused down forming an ample circular halo. At the centre of this halo is partially visible an ocellus edged in black with big central black pupil. The back of the fore wing proposes again part of the drawing placed on the upper face, whilst the rear wing is very particular and evidences those who are the predominant characteristics of this species. The base colour is the violet with a series of six ocelli heavily edged in black in the post-discal area among which stands out the fourth from the top resulting totally white and with undefined contour. There is then a belt of small white pearly squares covering totally the discal area. Unique characteristic among the congener Clossiana is the very sharp angle of the rear wing towards the upper margin, not rounded like the others. It has long and clavate antennae, coloured in alternate white and black traits. Several subspecies have been classified in function of the characteristics noted in the locations where present. It is a continuously moving butterfly and difficult to approach and to observe with attention. Unlikely returns to perch on the same just visited flower.

The Weaver’s fritillary is a very prolific butterfly which may give birth, as an average, to three annual generations. It spawns directly on the host plants or on a support close to them and after a short incubation the caterpillars disperse looking for their essences. The caterpillar is black covered by small whitish spines. It hibernates when larva and resumes feeding and the full development with the first warmth of the following spring. Very precocious species is flies off already by the end of April to restart a new cycle. The chrysalis is fixed to the withered stalks of the host plants or on nearby small branches and remains in such state for about three weeks. The chrysalis is fairly tiny, is of a nice orange colour wrapped, in correspondence to the two wings, by two yellowish belts. The host plants belong to the genera Viola and Rubus.