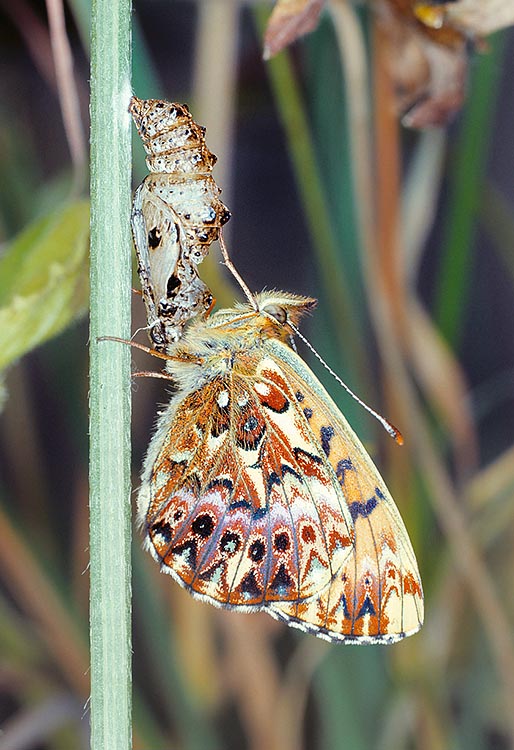 A Cossiana titania, just out from the chrysalis, in all its splendour © Giuseppe Mazza

The Titania’s fritillary (Clossiana titania Esper, 1793) belongs to the order of the Lepidoptera and to the family of the Nymphalidae.

As previously said, in this family are usually included more than 6.000 species of butterflies scattered all over the world, and therefore it is considered as the most consistent along those grouping the diurnal lepidopterans.

It is a butterfly much similar to those belonging to the genera Melitaea, Boloria and Brenthis with whom it shares the colour as well as the habitat and are therefore easily mistakable among them.

In this regard, it is often useful to refer to an old and simple popular classification that the British, traditionally experienced in this entomological sector, have done for distinguishing roughly these butterflies so much resembling each other.

They have divided the fritillaries in homogeneous groups, identifying through their size or the place where found, all European species belonging to these genera.

The titania’s fritillary is the biggest among the Clossiana and this characteristic is possibly due to the necessity of affronting the hardness of the habitat here it lives. It is very much localized and the locations are always linked to mountain zones or high latitudes, therefore with quite particular climate and habitat conditions. It is possible that the species has withdrawn in these isolated places after the last glaciations, rightly resisting to the ambient changes.

The butterflies of the genus Clossiana have usually with a very fast and very deep flutter of wings, spaced with very frequent and short high speed gliding. Also the measures share them to the Melitaea but upon a close analysis they show rather different drawings on the wings.

All have on the upper face marked and big black and round dots and almost never they do show that grid very typical to the Melitaea. The lower face of the rear wing is then determinant for the subdivision of the two genera: different colours and characteristic drawings render it a peculiar indication.

Many place the genus Clossiana in that of Boloria which however remains standing among the scientific names synonyms of this species.

It is very similar to the Clossiana dia, only congener sharing partially the same habitat, but the bigger size and some particulars of the drawings shown on the verso of the lower wing facilitate its identification. 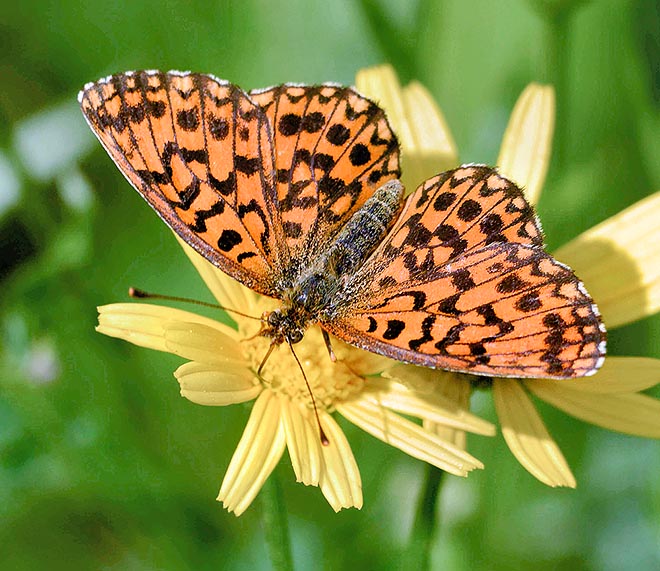 The scientific binomen has a modern derivation for the genus and a mythological one for the species. Clossiana comes from the name of a Belgian musicologist of the 19th century to whom Reuss in 1920 dedicated this genus of butterflies. Titania is dedicated to Titonius, a descendant of Titan.

Conversely, the scientific name Boloria is linked to a somewhat distorted interpretation made by Moore in 1900. Derived from the Greek “bolos” = fishing net, to indicate the reticulated design on the wings, an absolutely wrong particular seen that, as we shall see, the wings carry only a remarkable series of dots and spots but is absolutely absent whatever grid.

Not all European nations have given a local name to this butterfly as in many of them it is unknown. The Nacré porphyrin, in French; Titania’s Parelmoervlinder in Dutch; Lehtoho- peatapla, in Swedish; Titania’s fritillary or Purple bog fritillary, in English.

Purely Palearctic butterfly not much diffused and localized in some areas well isolated each other. It is present in the whole Alpine range, in some areas of the Balkan peninsula, in southern Finland and in some Baltic nations, in a small area of Poland, of Romania and of Hungary.

With scattered and isolated colonies, it reaches, crossing the continental Asia, the Siberia and the Far East. Purely mountain species even if it prefers to live in not high altitudes, it can be found on sunny prairies up to 1800 m of altitude.

It is a medium-sized butterfly with 40/45 mm of wingspan. As already briefly said, it is the biggest member of the genus Clossiana. It is orange brown and the upper face of the fore wings is distinctly marked by black drawings of various shape with a series of blackish lined round spots running on the whole post-discal area of the two wings, from the rib to the lower back margin. Like in the Clossiana dia, in the basal area of the rear wing, is present a blackish and diffused down forming a stripe parallel to the body, in whose centre is visible in a more evident way than in the weaver’s fritillary, a big ocellus edged in black, with black pupil in the centre. 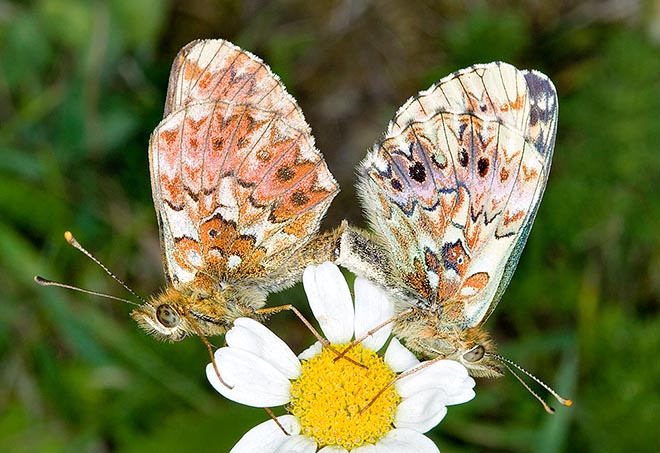 A mating. Localized in mountain habitats, reproduces only once per year © Giuseppe Mazza

The fore wing verso once again proposes part of the drawing placed on the upper face in a more marked way than in the weaver’s fritillary, whilst the rear wing is quite particular and presents those who are the predominant characteristics of this species.

Like for the Clossiana dia the base colour is violet/lilac with a series of six ocelli slightly edged in black in the post-discal area among which is evident the upper fourth that results totally faded and without contour.

On the contrary, is totally missing the uninterrupted belt of small pearly white mirrors in the discal area present in the weaver’s fritillary, which, in the Titania’s fritillary are replaced by black spotting scattered on a very evident violet/lilac background. Just under the cell is furthermore present a small but evident white spot on lilac background.

In the discal areas next to this white spot it can be often noted a great “X” of whitish colour. It does not show the much sharp angle of the rear wing towards the upper margin present in the weaver’s fritillary, here, on the contrary, with normal rounded curve. It has fairly long and clavate antennae, coloured in white and black alternated outline.

The Titania’s fritillary, due to the characteristic of the habitats where it lives, is a monovoltine species. It spawns directly on the host plants or on a support close to them and after a short incubation the caterpillars disperse and live alone. The caterpillar is blackish covered by small whitish spines and has on the head two blackish appendices similar to small antennae. It hibernates at the larval state when the caterpillar is still very small, to resume feeding and the full development by the first warm days of the following spring.

Not too precocious species, flutters in June and till August, depending on the places where present. The chrysalis is fixed to small branches of the host plants or hidden on nearby brushwood and remains in this stage for about three weeks. The host plants belong to the genera Viola, Rubus and Polygonum.