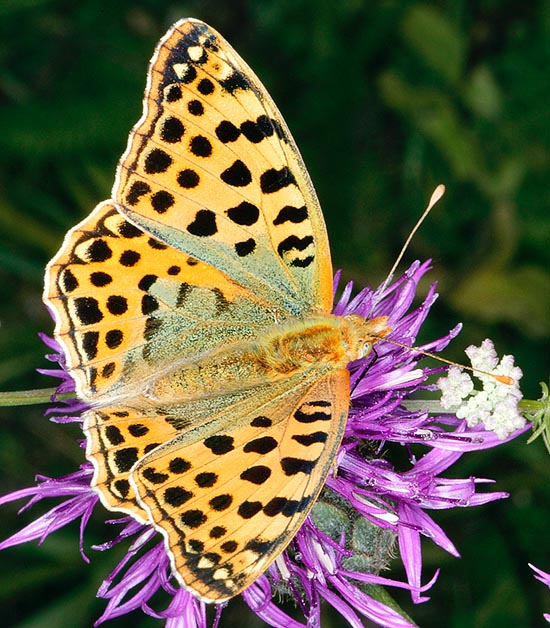 Female of Issoria lathonia. The abdomen is shorter and squatter than in the male and we see dark, greenish shades in the area of the upper alar speculum © Giuseppe Mazza

The Queen of Spain fritillary (Issoria lathonia Linnaeus, 1758), belongs to the order of the Lepidoptera and to the family of the Nymphalidae.
In this family, considered as the most consistent among those grouping the diurnal lepidopterans, are usually included more than 6.000 species of butterflies scattered all over the world.

This butterfly is vastly diffused in Europe and amply known due to its constant presence in whatever open space.
Although small, it has a rapid and nervous flight but frequently settles after fast movements, spreading the wings and exhibiting the beauty of its drawings.
It is an easy to detect on the field butterfly and does not escape the watchful eye of the person looking for it.

Its scientific name “Issoria” refers to the mount Issorion, close to Sparta where stood the temple dedicated to Artemis Issoria, place of veneration and contemplation of this goddess.

Lathonia from the Greek Leto, then in Latin Latona, was the mother of Apollo and Artemis who had conceived them from Zeus.
The result is that both indicated names in the scientific binomial refer to the goddess Artemis, our Diana, hunter and in the meantime protector of the animals.

As aforementioned, this butterfly is rather small though being very similar for shape and drawings to the big Argynnis.

This characteristic has been the basis for the adoption, in several European nations, of common names linked to the size of this butterfly, recalling, in the meantime, its belonging to this group. As a matter of fact, we have: in German Kleine Perlmutterfalter; in Dutch Kleine Parelmoervlinder; in French le Petit Nacrè; in English Queen of Spain Fritillary and in Catalan Mirallets.

It has an extremely vast range covering the whole Europe through all the temperate are of Asia up to China and Mongolia. Its capacity to adapt to the most various climates, sees it reaching the extreme north of the European continent as well as covering areas gong from the coast up to 2.700 m of altitude. Occasionally, its presence has been reported on the Matterhorn up to 3.000 m of altitude. This ascending movement is characteristic of the very hot periods which see the nival level reaching altitudes well higher than the usual ones. In Africa it is usually present on the coast but in a never consistent number. 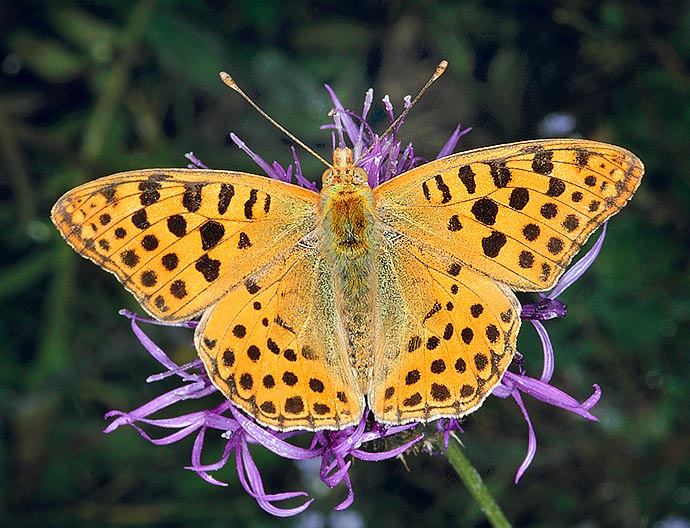 Moreover, the male is more active. While the female rests, it continuously takes flight to defend the territory, contrasting the passage of other butterflies and then gets at once back to its starting point © Giuseppe Mazza

It lives in mainly dry and grassy clearings in stony areas as well as in humid zones. It does not like particularly the woody areas even if at times it does not disdain their frequentation.

In all its area is never present in large groups but is duly disseminated in all the frequented areas.

It is a migratory butterfly and often the northernmost areas are periodically visited and repopulated with the warm season.

In England the reproduction areas are rather rarefied and therefore this butterfly is carefully studied and followed in its seasonal fluctuations which arrive to integrate the scarce local population. Strangely enough, some permanent settlements have been found in southern Sweden and Finland as well as along the Polish coasts.

The queen of Span fritillary is a medium-sized butterfly even if it results much smaller than the Argynnis. It has a wingspan between 40 and 45 mm with much more pointed wings than the members of its group. This alar conformation enables this butterfly to perform very fast and evolved flights so much to render it often invisible in these rapid movements. It is not a fearful butterfly, on the contrary, it is very curious and often, getting inadvertently in its territory, it is seen while inspecting carefully the intruder doing rapid flights all around. It loves resting directly on the ground in small spaces without vegetation and spreading the wings while flattening on the ground.

There is a slight sexual dimorphism in the female which results being little bigger than the male with a remarkably shorter and squatter abdomen and with darker and greenish shades in the basal area of the upper speculum of the wings. Furthermore, the male has a much more active behaviour than the female who usually prefers to keep motionless in its resting position. As a matter of fact, the males, in their action of defence of the territory, are seen taking flights continuously thus contrasting the passage of other butterflies to then come rapidly back to the starting point. 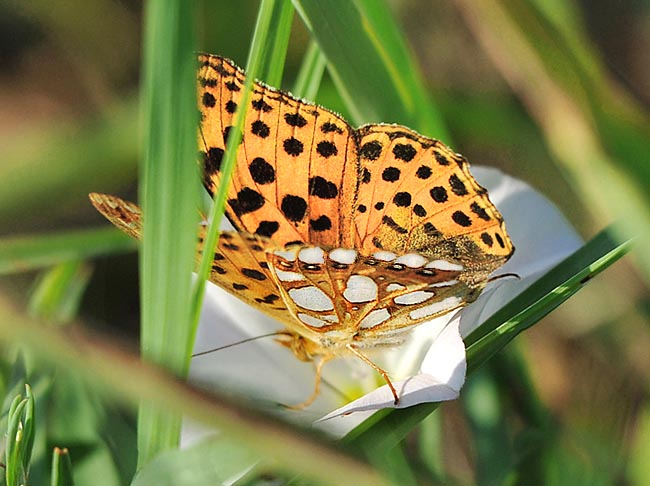 The specula and the pearly lunettes of the under wing are an important identification element © G. Colombo

Both wings of Issoria lathonia have on the upper face numerous roundish spots of different size creating well evident discal and post-discal lines.

The lower surface of the rear wing has, on the contrary, the characteristic rendering unmistakable this butterfly: big and evident silvery/pearly specula on the whole surface and a continuous series of other white/pearlaceous bright lunettes surrounding the whole border of the wing.

The antennae are well pronounced, of dark colour with flat and roundish vertex.

Usually, in Europe, this butterfly has three generations reaching in some years a fourth one by the end of the summer.

The queen of Spain fritillary hibernates in whatever stage therefore has a period of take off extremely vast starting usually from the month of March up to late October. This characteristic allows seeing it for a good eight months in the year, rendering it one of the butterflies mostly present in Italy. In most of its distribution area it hibernates at the stage of egg hatching by the first late spring warmth thus beginning the customary trivoltine cycle. The about 3 cm caterpillar is blackish with reddish small points along the sides, with spiny cusps along the whole body. Like all Argynnis also the Issoria lathonia has as host plant the violets, with preference for Viola tricolor, Viola arvensis, Viola odorata and Viola calcarata. Also this butterfly loves visiting flowers but with a quite ample variety, seen the wide period of fledgling which sees it present from early spring up to late autumn.