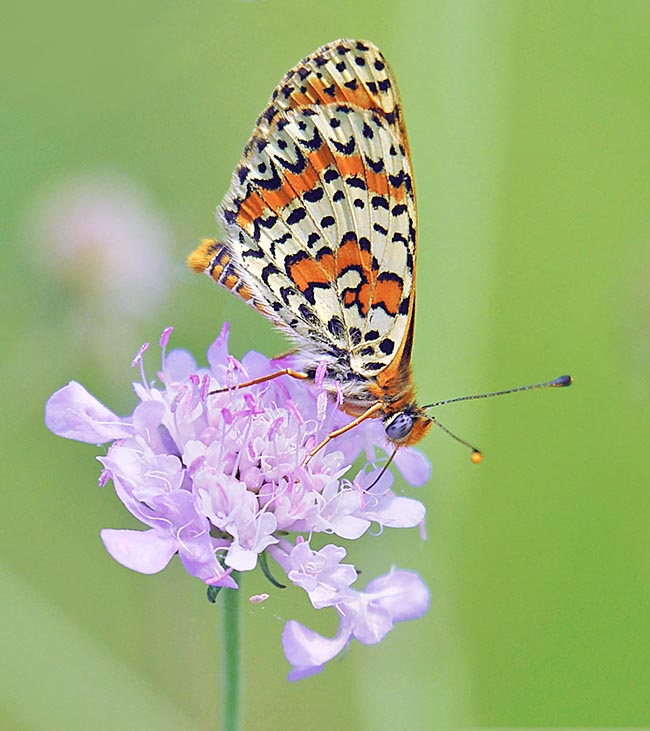 The Spotted fritillary or Red-band fritillary, Melitaea didyma (Esper, 1778), belongs to the order of the Lepidoptera and to the family of the Nymphalidae.

As already briefly told, in this family are usually included more than 6.000 species of butterflies scattered all over the world and this is why it is deemed to be the most consistent amongst those grouping the diurnal lepidopterans.

This butterfly is almost certainly the most variable fritillary in the upper drawing of the wings and these differences may be found not only amongst the numerous subspecies but even among elements of the same group or colony.

Furthermore, there are seasonal variations conditioned by ambient humidity and temperature and by feeding typology.

Its extreme variability has rendered this butterfly particularly interesting and often reason of insights and studies from entomologists looking for new subspecies or for particular chromatic variations.

It is an extremely common butterfly living in huge colonies and is often, locally, invasive.

The etymology of the scientific name of the Melitaea didyma is, like all names given by the first naturalists, subject to different interpretations, in particular the first part of the binomen. (Please see Melitaea cinxia Fabricius, 1807) has, as usual, gambled on the name, by mediating various interpretations given by other contemporary naturalists. Eventually, he proposed a solution indicating the origin from the Greek “meli” = honey, evidencing in this way the strong attraction this butterfly has for the very sweet nectars. 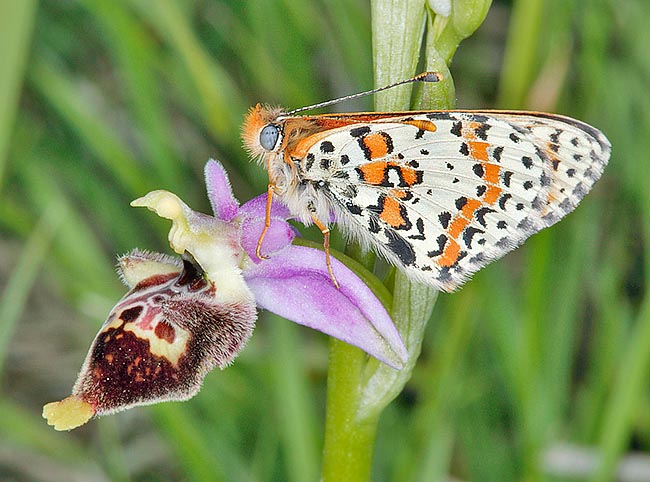 Sodoffsky, 1837, derived it, with a slight distortion, from Melinaea, referring to one of the numerous nicknames assigned to Aphrodite (Venus).

Pickard derived it from Melitaea, the name of a city of Thessaly

Mcleod, from the Greek “melitaios” = coming from Malta.

Finally, Mélitea was also one of the Nereids, daughter of Nereus and Doris.

Thus, all interpretations given during the time by the various naturalists are quite acceptable and supported by correct linguistic evaluations.

Conversely, the etymon of the species “didyma” comes from the Greek “didumos” = twin, to indicate the strong resemblance of this butterfly to the Melitaea phoebe, a fairly similar butterfly and often object of confusion.

The current European names are rather different and mainly identify some characteristics of this butterfly. In English, Spotted Fritillary; in French, Damier orangée; in German, Rote Scheckenfalter; in Dutch, Tweekleurige parelmoervlinder and in Spanish, Doncella timida. 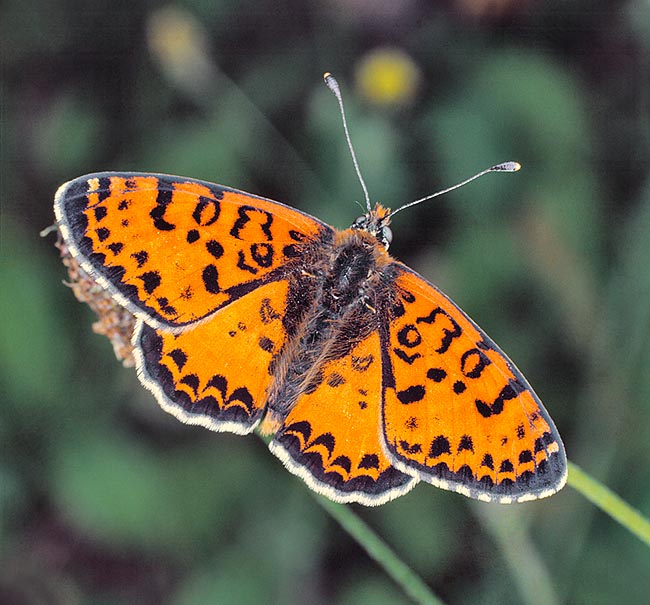 The Melitaea didyma is amply present in the southern part of the European territory, but Corsica and Sardinia, whilst is totally absent from the North and Baltic Seas and the territories washed by them.

It is also found in all Asia in the tempered belt going from Turkey and Middle East up to Mongolia. In North Africa, it is present only in its western Mediterranean part, from Tunisia to Morocco.

It lives in all sunny meadows and grassy clearings up to about 1500 m of altitude, where it is in great number during the whole summer.

The Melitaea didyma is a medium-sized butterfly, easy to be mistaken with all congener fritillaries present in the same area.As a matter of fact, it overlaps many other species and, as already mentioned, only when seen up closely and possibly analyzing the lower page of the wings, it can be easily distinguished from the other congeners.

Its wingspan is of about 5 cm with a slight dimorphism for the female, which appears to be slightly larger, with a more massive body and a paler colour. In the males the upper surface of the wings is of a uniform orange colour, so much bright to make them appearing even red when flying. The whole is marked by a series of poorly defined lines and dots and black more or less diffused spots. Along the side of both wings, are present small black triangular or roundish small lunettes which uninterruptedly surround both wings. 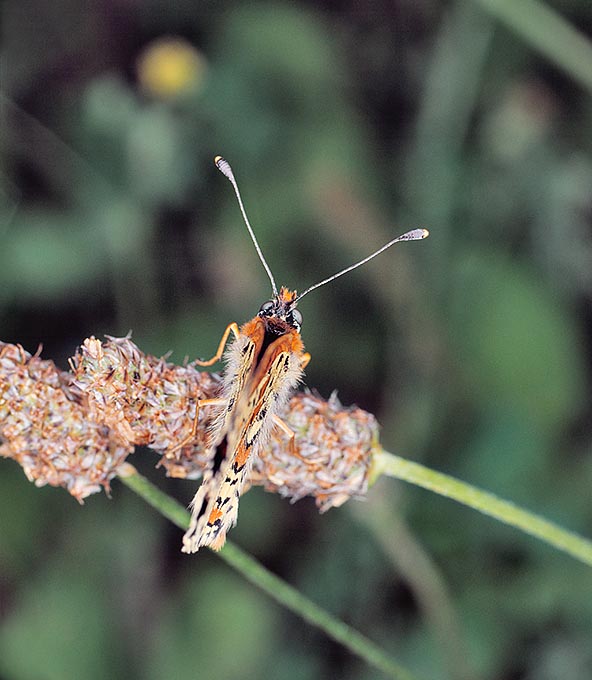 It opens and closes them winking or, if in danger, for a perfect mimicry © Giuseppe Mazza

The female has a much paler colour and often in the Melitaea didyma f. meridionalis, the orange colour is partly or totally replaced by a grey/greenish tonality. The female of this form, almost prevalent in the southern areas of the range, is the only fritillary showing this characteristic of colour.

On the contrary, the particularities of the drawings on the lower page are more constant, especially on the hind wings where are easily identified some characteristics which keep practically unchanged in all the specimens.

The rounded blackish spots placed on the yellowish margin of both wings (whence the current English name) and the continuous basal belt of orange colour (whence the current French and German names) are determining features in the classification of this butterfly.

The antennae are well developed and robust of yellowish brown colour, with flattened and whitish vertex.

Like all fritillaries, it flies in the warmest periods of the year, starting from May up to early October.

It is an easily visible butterfly as it spends a lot of time flying passing from a flower to another and is also easy to approach and to observe when feeding.

It lays a high number of eggs and so each generation sees a remarkable quantity of flying specimens concentrated in even confined areas. The colonies are often formed by thousands of butterflies which practically invade the occupied area. 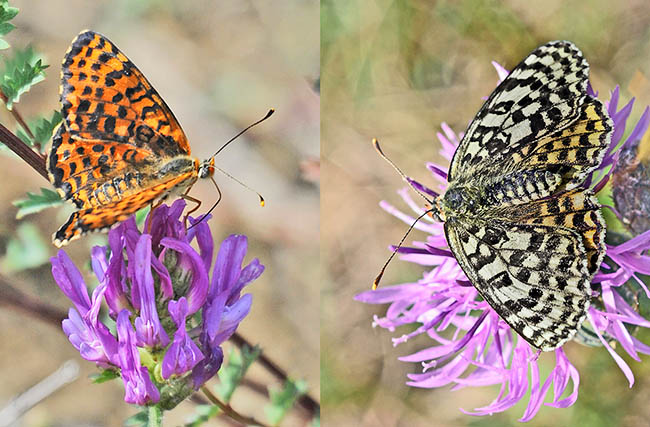 A normal female and one of Melitaea didyma f. meridionalis, with its dull colours © Gianfranco Colombo

The eggs are spawned directly on the host plants and hatch in very short times, so much to guarantee an almost constant number of specimens in the involved area.

The last generation of the year spends the winter in the stage of small larva.

The adult caterpillar is about 2,5 cm long with orange spots which alternate in parallel rows, for the whole length of the body. Corresponding to these spots, emerge small hairy protuberances of black colour and shaped like crowns. It is an extremely elegant and multi-coloured caterpillar in colour and look.

The pupa has a fast incubation period, less than two weeks.

Amongst the host plants, it prefers Plantago, Veronica, Centaurea and Linaria.