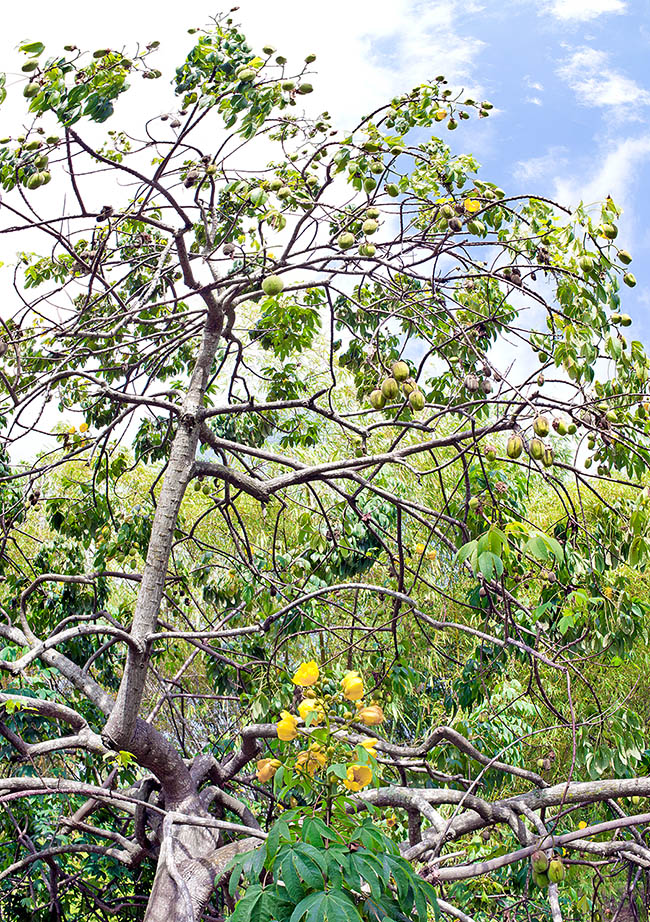 Cochlospermum religiosum is a small 3-8 m tree native to India and Myanmar. The specific epithet of "religious" comes from the fact that in India the flowers are offered for devotion in the temples, especially to god Shiva © Giuseppe Mazza

The species is native to India and Myanmar, where it grows in the dry deciduous forests in particular on rocky slopes, up to about 1000 m of altitude, in zones with monsoonal climate.

The Cochlospermum religiosum (L.) Alston (1931) is a shrub or a deciduous or semi-deciduous small tree, 3-8 m tall, with greyish bark, deeply grooved, from which exudes a gummy liquid of orange colour. The leaves, grouped at apex of the branches on a petiole long up to 20 cm, are alternate, palmate with 3-5 elliptic-lanceolate lobes with pointed apex and entire or crenate margin, 8-15 cm long and up to 20 cm broad, coriaceous, of intense glossy green colour on the upper page, tomentose below.

Bisexual fragrant flowers, of about 10 cm of diameter, united in terminal panicles, which appear mainly after the fall of the leaves, with corolla formed by 5 obovate petals deeply emarginated of golden yellow colour, about 5 cm long and 3 cm broad, and several orange stamina. Among the main pollinators are the bats, in particular the Pteropus giganteus (Brünnich, 1782), commonly known as Indian flying fox. The fruits are obovoid or pyriform dehiscent capsules of brown colour with 3-5 valves, of about 8 cm of length and 5 cm of diameter, containing numerous black reniform seeds 0,6 cm long and surrounded by a mass of white sericious hairs. 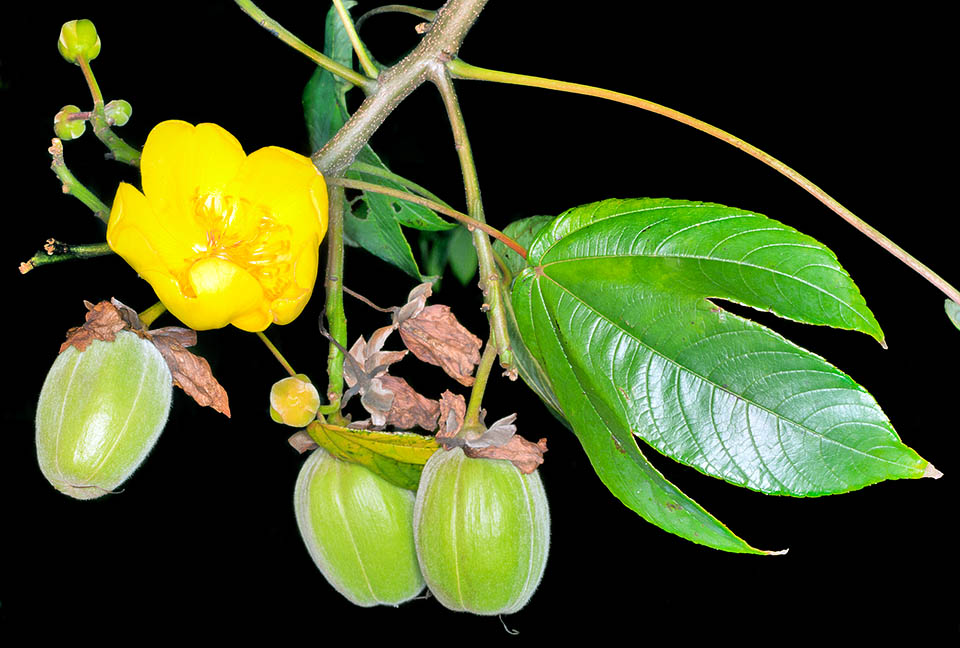 It reproduces by seed to be interred as soon as possible as it has germinative capability of 1-2 months, previously kept one day in water, with germination times of 4-5 weeks, as well as by cutting and layering. Fast growing species which since remote times has great importance in the traditional Indian medicine, utilized also for ornamental and religious purposes due to the great intensely coloured flowers and for this reason often planted close to temples.

Cultivable in the tropical and subtropical climate regions in full sun on particularly draining soils, even stony; when adult it can stand long periods of drought. 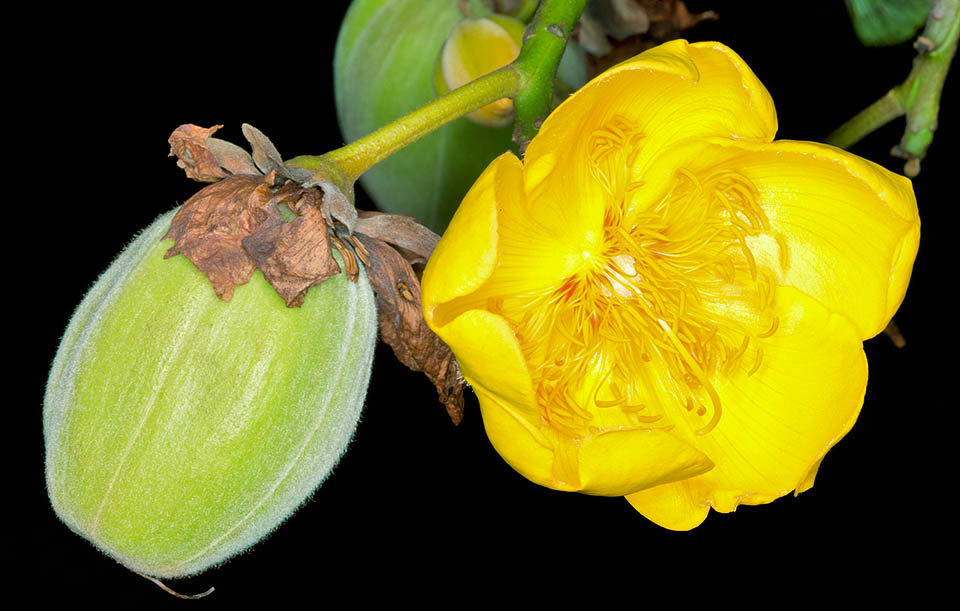 The 10 cm broad flowers are pollinated by the bats. The fruits are obovoidal or pyriform dehiscent capsules about 8 cm long and of 5 cm of diameter © Giuseppe Mazza

Tree having a certain economic importance due to the gum exuding from the bark, insoluble in water, known as katira, which is also exported, with numerous employments in the pharmaceutical and cosmetic industry, used moreover in the preparations of glues, in manufacturing cigars, as emulsifying agent and as component of the growing means in the micropropagation.

From the oil is gotten an oil employed in the soap industry and the residue of the pressing is utilized as feed for livestock, whilst the thin fbres enwrapping them, similar to those of the kapok (Ceiba pentandra (L.) Gaertn., 1791) are at times utilized for paddings. 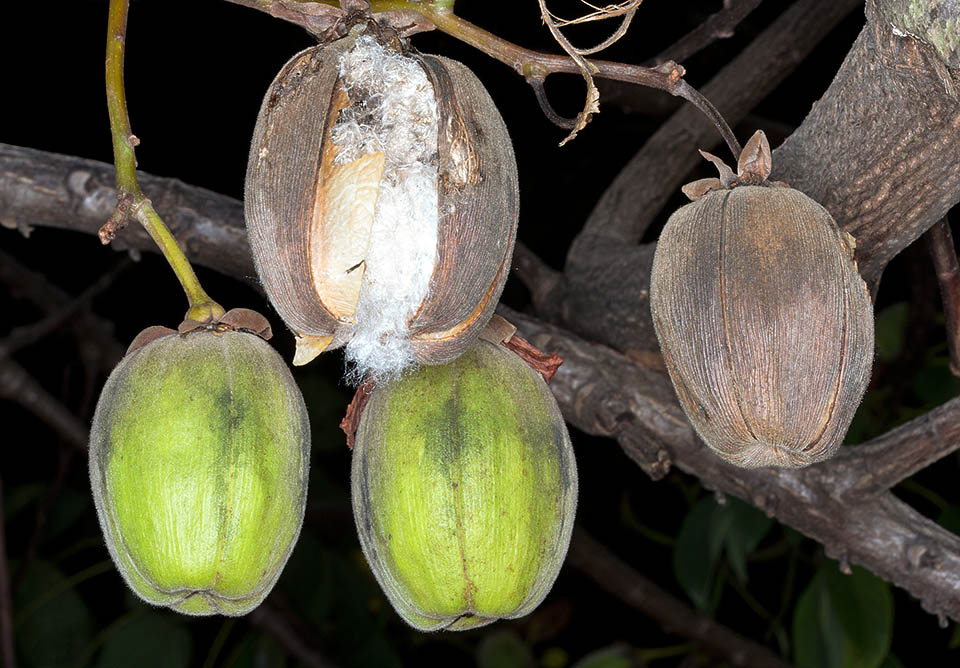 Leaves, flowers, bark, roots and gum display medicinal virtues. From the seeds they get oil for soap and the residues are used as cattle food, whilst the thin fibres wrapping them, similar to the Kapok ones, are used for paddings. Seen its fast growth, the tree is finally employed in the reforestation of degraded areas © Mazza

Leaves, flowers, bark, roots and gum, as said, have a long tradition of employment in the popular medicine for various pathologies and recent studies have confirmed the antimicrobial properties in particular the extracts of leaves and flowers. The tree is frequently used in the reforestation of degraded areas.

→ To appreciate the biodiversity within the BIXACEAE family please click here.