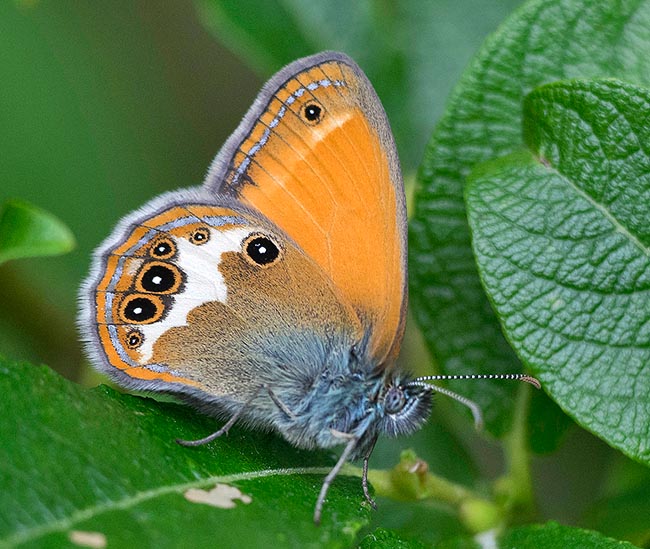 Coenonympha arcania is very common in clearings, woods margins and mountain lawns up to 2000 m of altitude © Gianfranco Colombo

It is a butterfly much similar to the 13 conspecifics present in Europe and results not easy on the field to determine its species is not analyzing the lower page of the wings.

Although if standing among the largest of the components of its genus, often due to the overlapping of the habitat by several species, is necessary a good entomological experience for establishing exactly its positioning. In fact, it is easily mistakable with the Coenonympha dorus, the Coenonympha tullia and the Coenonympha hero, for the size as well as for the drawing on the verso of the rear wing and is practically indistinguishable from all the others is analyzed only the upper page of the wings.

Moreover, all the species belonging to the genus Coenonympha show very often variation of colours and tonality; at times are subject to forms of slight melanism and erythrism and also to remarkable variations in the size, and consequently it is easy to make a mistake in the attempt of determining a subject on the field. 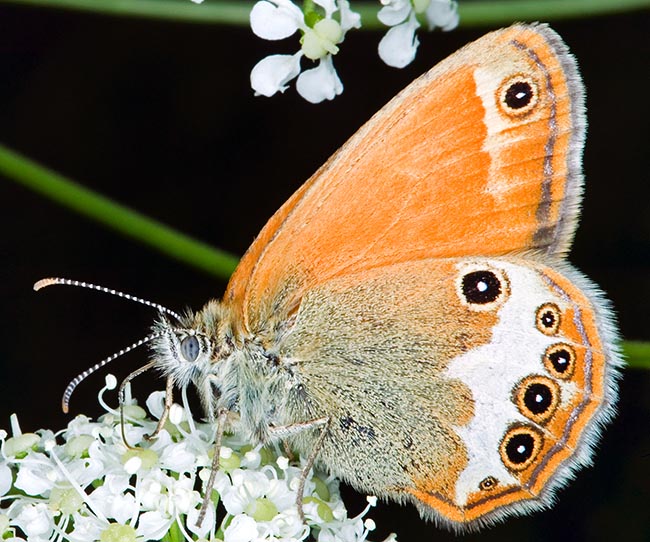 It has an about 4 cm wingspan, but in altitude the subspecies darwiniana doesn’t exceed the 3 cm © G. Mazza

In any case it is easier to find the pearly heath flying around in a preeminent area of the Coenonympha pamphilus than the contrary. The etymology of the scientific name Coenonympha comes from the Greek “koinos” = in common and “numphe” = nymph, to indicate the genus common to many species widely diffused.

The pearly heath is a butterfly common in the Palearctic and geographically retraces the range of the more common small heath.

It is present in all Europe excluding the northern part of the Scandinavian peninsula, England, the southern part of the Iberian peninsula and the Mediterranean islands. It is found in Russia up to the Urals and, with other subspecies, up to the Far East. It lives in habitats cooler than those of its congeners and is linked to grassy prairies, margins of woods, clearings and flowery meadows.

Very common and densely present species in all the clearings at the margins of the woods, on the mountain pastures and on the grassy slopes. It can reach the 2000 metres of altitude, but its preferred habitat stands at hilly level from 500 to 1000 m of altitude. 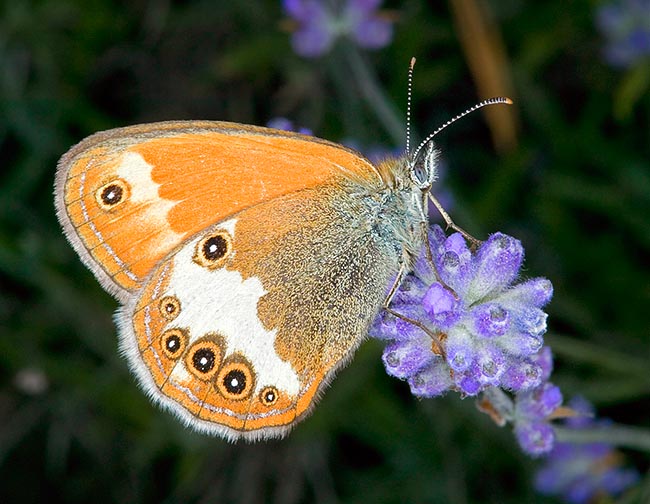 Due to the cold climate where it lives, it generates only once per year usually laying the eggs on plants of the genera Festuca, Poa, Melica and Agrostis. The caterpillars spend the winter small and incomplete © G. Mazza

The pearly heath is a medium-sized butterfly with about 40 mm wingspan, measure that places it among the biggest in the members to its genus but some of its subspecies, like the Coenonympha arcania darwiniana, typical inhabit- ants of the Alps, is remarkably smaller, as it barely exceeds the 30 mm.

This butterfly has the upper face of the wings typically of dull orange colour like all its congeners, with a dark border along the entire margin.

The fore wings have a livelier colour and do not have any drawing or spot whilst the rear ones are much darker, almost brown and allow a glimpse of two of the ocelli carried on the verso.

The lower page of the wings, in particular the back one, is determinant for the classification of the species.

Whilst on the fore one is proposed again the orange colour having the same tonality carried on the upper face, on the rear one is shown a line of five ocelli surrounded by black and outlined in orange, two of which much bigger, placed in the sub-marginal area at the limit of a wide white belt crossing the wing in the post-discal area. Beyond this belt, on the coastal margin in the discal area, is present a sixth ocellus, small but well evidenced by an accentuated black border. Remarkable and quite beautiful is the narrow silvery belt outlining the sub-marginal area.

The antennae are small but robust, dashed black and white and clavate at the vertex. Also for the pearly heath have been classified many subspecies always linked to the territory they occupy. 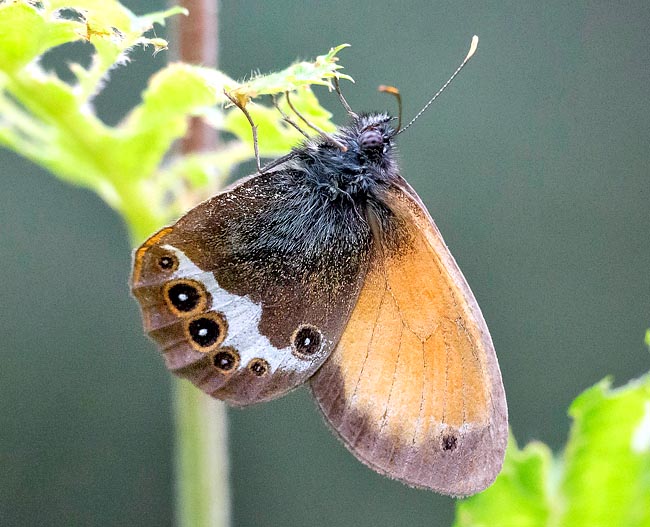 An aberrant form: melanism and erythrism are frequent in the Coenonympha © Gianfranco Colombo

The adult butterfly nourishes of the nectar of various asteraceae but does not disdain the flowers of shrubs and other essences.

The adults often love to perch on shrubs in a high and sunny position for controlling the underlying territory and verifying the passage of potential partners.

The pearly heath is monovoltine and only rarely we can assist to a second generation. It flies from May to late August, and even later if the season keeps favourable. It spawns directly on the host plants and the caterpillars spend the winter when still small and incomplete. The eggs are greenish but soon assume the same colour as that of the dried stalks of the chosen essences. Among the preferred host plants are those belonging to the genera Festuca, Poa, Melica, Bromus and Agrostis.