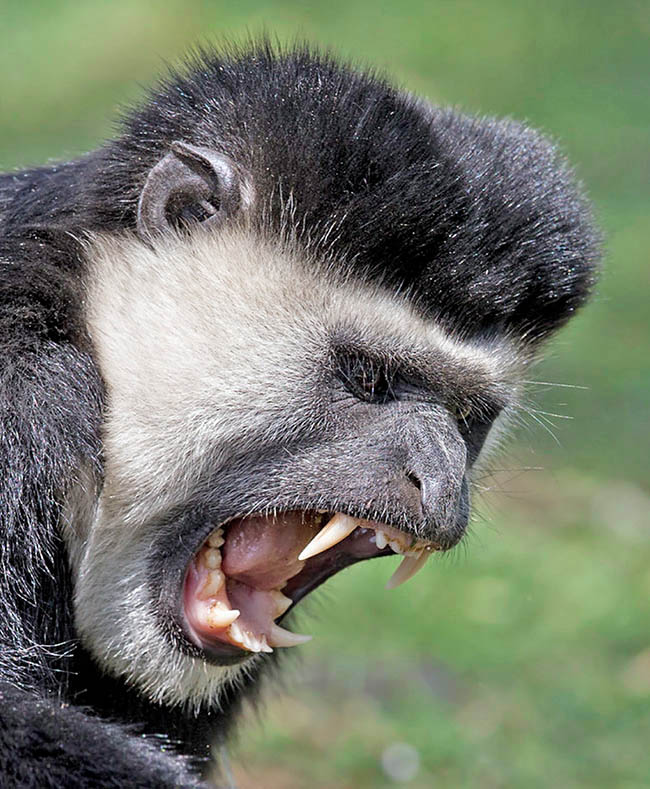 Colobus guereza (Rüppell, 1835), commonly known as Guereza, is an Old World primate belonging to the family of the Cercopithecidae, subfamily of the Colobine.

In the scientific classification, the genus Colobus comes from the old Greek “κολοβός” (kolobós), crippled, and evokes the absence in this genus of the thumb, present only in the embryonal stage or as vestigial; conversely, the name of the species, guereza is the Ethiopian name used for designating this primate.

In accordance with what is reported in the Red List of the International Union for Conservation of Nature (IUCN), Colobus guereza is a species at low risk of extinction, as it is threatened only locally and in some areas.

This vast range is occupied by the eight subspecies of Colobus guereza that distinguish for minimal morphological differences and for the specific range each of them occupies:

Colobus guereza guereza (Rüppell, 1835), diffused in the forests of the Ethiopian highlands, west of the Rift Valley and in the plain areas along the courses of the Awash and Omo Rivers and of the gorge of the Blue Nile;

Colobus guereza caudatus (Thomas, 1885), present between the southern part of Kenya and northern Tanzania, in the mountain forests of the Kilimanjaro and Meru Mounts and in the nearby forests located at slightly lower altitudes (Arusha National Park);

Colobus guereza occidentalis (Rochebrune, 1887), present form eastern Nigeria, from Cameroon and from Gabon up to the south-western part of Sudan and Uganda, west of the Nile;

Colobus guereza matschiei (Neumann, 1899), present in the south-east part of Uganda (Elgon Mount), in Kenya west of the Rift Valley and in some forests inside it, and in the north-west of Tanzania, north of the crater of the Ngorongoro Crater and of the Grumeti River; 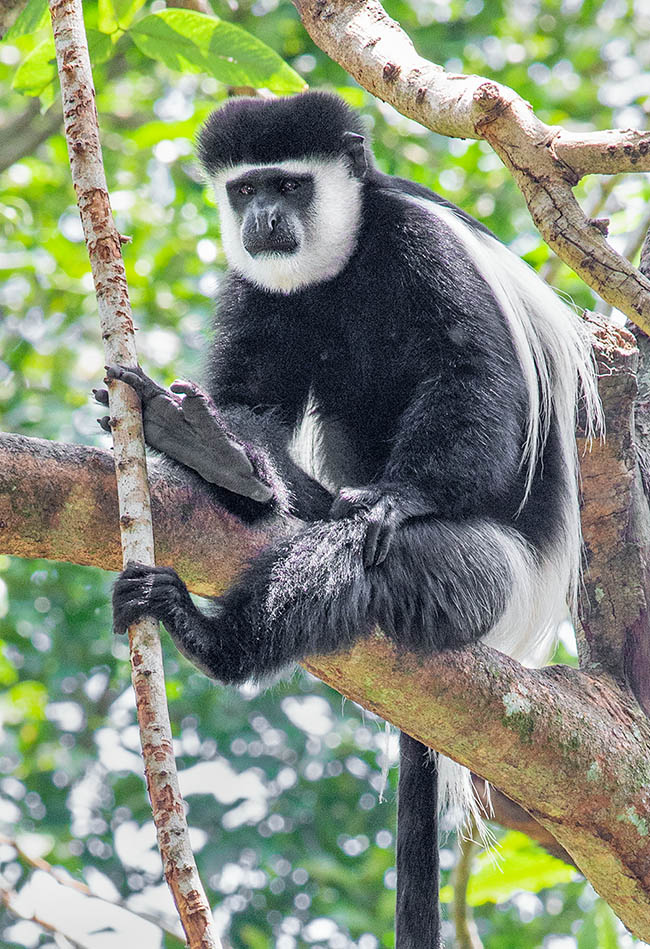 Colobus guereza gallarum (Neumann, 1902), present in a limited area of the Ethiopian highlands east of the Rift Valley;

Colobus guereza kikuyuensis (Lönnberg, 1912), present in the highlands of Kenya and east of the Rift Valley, from the Ngong Hills to the Kenya Mount and to the Aberdare mountains;

Colobus guereza percivali (Heller, 1913), present in a small forest zone close to the Gargues Mount in the Matthews Range, in Kenya.

It displays sexual dimorphism, noticeable in the body size as well in the pattern of the hair in the perineal region: here the males present ischiatic callosities of white colour and continuous, whilst in the females these are separated by a stripe of black hair.

With the due light differences among the eight subspecies, the guereza ha short black hair with long white hair fringes that run laterally to the trink, from the shoulders to the hips, until closing in a U in the lumbar region: this peculiarity renders the white fringes similar to a mantle.

The length of the white fringes varies depending on the subspecies, though the overall trend sees a bigger length in those individuals living in higher altitudes.

The tail has a long and dense tuft of hairs that may limit to the terminal part or form most of the tail.

The face, black, presents a frame of white hairs and a thick white hair at the cheeks. The nose is hooked and almost reaches the mouth.

When they come to life, the newborns of guereza have the pink skin covered by white hairs. The skin and the hairs get darker with the development, till when, at the age of 3-4 months, the young assume the same colouration as the adults.

As we have seen in the etymology, this primatev has only four fingers, with ath thumb absent or reduced to a small vestigial.

Being members of the genus Colobus, of the subfamily of the Colobine, they do not have cheek pouches. 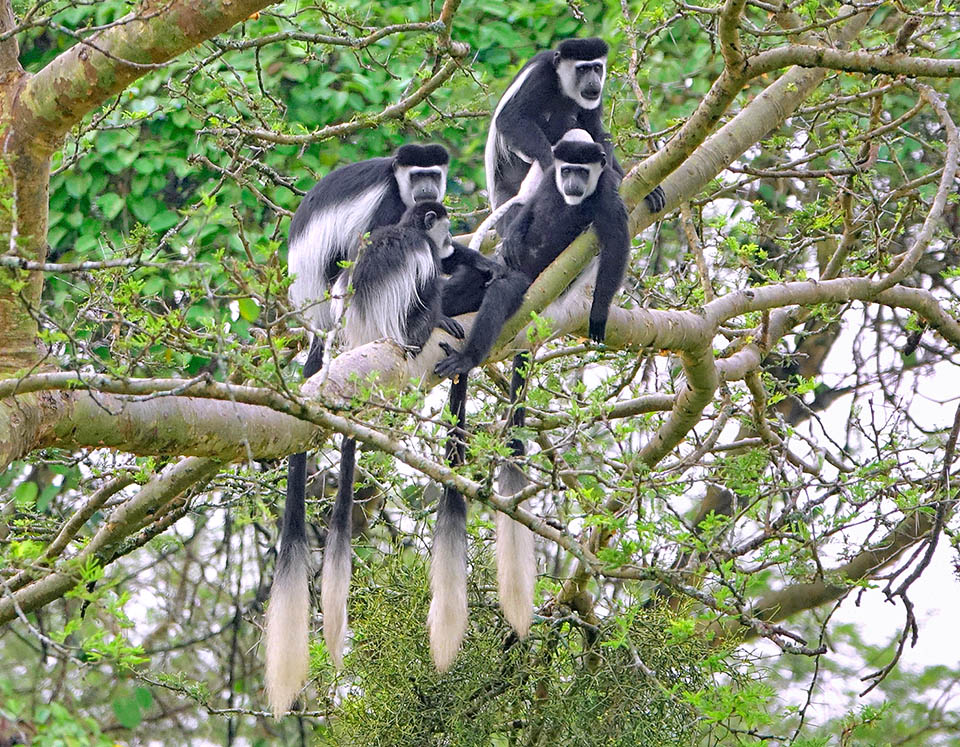 Group of Colobus guereza occidentalis, present from east Nigeria, Cameroon and Gabon up to south-western part of Sudan and Uganda, west of the Nile © Valerie Hukalo

It may be found in environments reaching the 3300 metres of altitude and occupies also secondary forests it prefers to the virgin ones if it has availability of both habitats: this choice is attributed to the greater variety of the trees of which it feeds and the the less offensive chemical defenses of the leaves of the vegetal species present in the secondary forests.

Often, due to the deforestation, the Guereza is met in areas occupied by man, in particular in the plantations of eucalyptus, in order to compensate for possible nutritional deficiencies caused by the absence of the original sources of food. 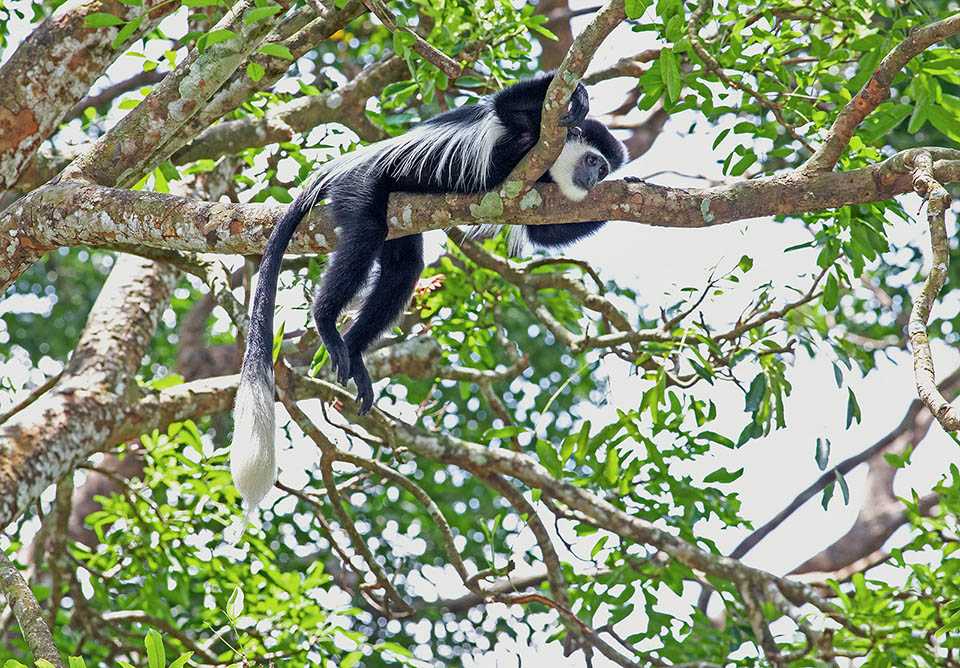 Arboreal and diurnal, lives in forests up to 3300 m of altitude eating mainly leaves and fruits it collects unripe, before the competing species. This diet is enriched with fragments of wood and bark, seeds, flowers, petioles, lianas and arthropods. When descends to the soil is for eating aquatic plants or ingesting clay of termite mounds © Giuseppe Mazza

The diet is quite varied and is mainly based on fruits and leaves. The pulpy fruits are eaten unripe, to avoid competition with other species of primates that prefer them ripe. In case of wide availability, the Guereza prefers the fresh leaves to the ripe ones. Other foods part of the diet are: bark and wood, seeds, flowers, petioles, lianas and arthropods.

Now and then, it descends to the ground to nourish of aquatic plants and to eat the clay of the termite mounds.

The quantity of each food in the diet varies depending on the geographical area considered and on the period of the year.

The Guereza digests leaves and other vegetal fibres thanks to the bacteria present in its peculiar multi-chambers and very complex stomach. The synergy between the anaerobic bacteria and the fluids secreted by its salivary glands allows an optimal digestion of the cellulose of the leaves, rendering nutritionally complete the folivorous diet of this primate. 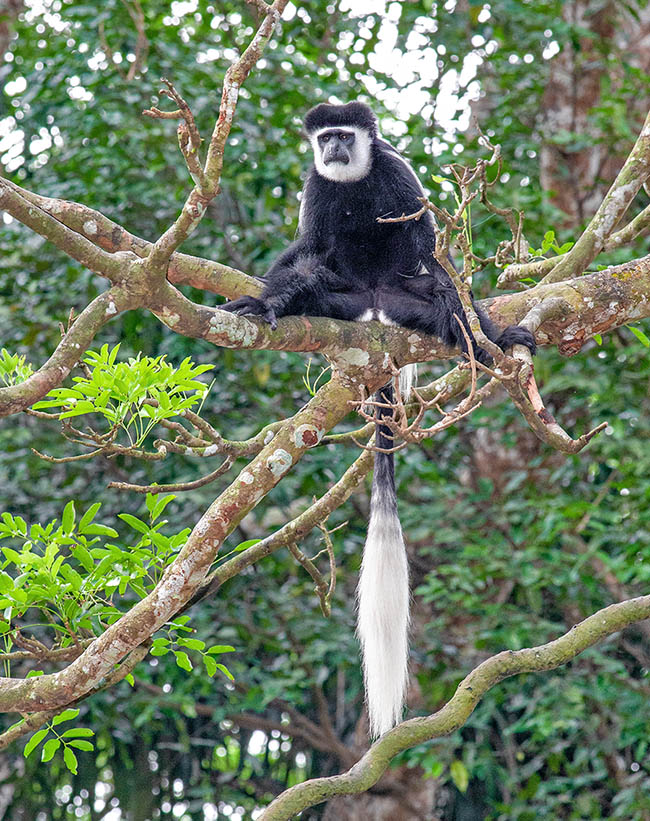 The females, smaller, have white and continuous ischiatic calluses, separated by a stripe of black hair © G. Mazza

The natural predators of the guereza are the Crowned eagle (Stephanoaetus coronatus), the Leopard (Panthera pardus) and at times the Chimpanzee (Pan troglodytes).

The guereza normally lives in small and cohesive groups of 6-10 individuals.

The dimension of the groups tends to increase at higher altitudes.

The groups are usually formed by only one adult male (more than one in the more numerous groups), some adult females and immature individuals.

The groups counting more adult males are unstable and tend to fall on a structure with only one adult male.

The organization of the groups is matrilineal: adult females and immature individuals form their main core. Inside the same group, and in some cases in groups living in neighbouring territories, the adult females are related to each other.

The females remain within the birth group, but can disperse if the group breaks up. Conversely, the males leave the origin group just before their complete maturity, voluntarily or after having been sent away by the adult male of their own group.

Abandoned the birth group, the males carry on a solitary life or join other solitary males.

In captivity the females do not display any hierarchy, whilst in nature dominance relationships do exist.

The reproductive cycle of the females of guereza lasts about 24 days. The interval between two births is about 22 months, with a minimum of 16 months. The birth rate is bigger in forest habitats.

The coupling is equally stressed by the female and the male.

The invitation takes place by approaching the potential partner and emitting snaps of small intensity with the mouth and loud kisses. In the groups counting more than one adult male, the females mate with more than one.

The pregnancy time lasts about 158 days in nature, about 170 in captivity. Only one baby is born at a time.

There is not a specific reproductive period, even if we encounter seasonal peaks when there is a bigger availability of resources. 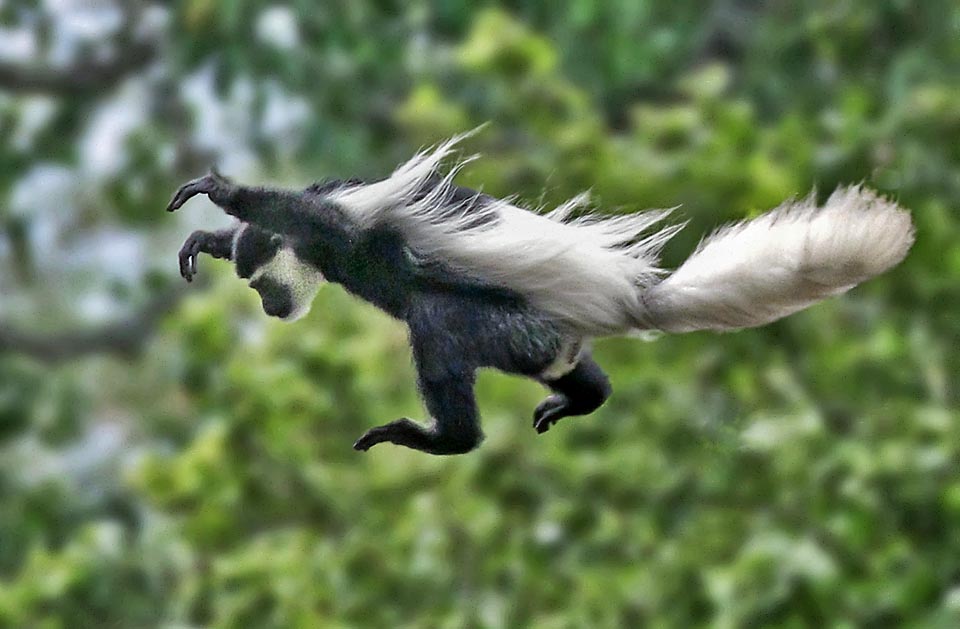 They pass from tree to tree with acrobatic leaps and rarely descending to the soil. The main natural predators are the Leopard, the Crowned eagle and the Chimpanzee © Charles G. Summers, Jr

The kids stand at the centre of the attention of the other members of the group, especially of the females, who may take care of them and even carry them for fairly long distances. The males begin to take interest in the kids when they reach the 4-5 weeks of life.

The kids are able to eat solid food between eight and nine weeks and starting from the fiftieth week they are completely weaned.

Sexual maturity is reached when 4 years old by the females and when 4-6 by the males. In captivity they may live up to 30 years.

The mutual cleaning of the hair (allogrooming) occupies an important part in the interactions of the species and occurs mainly in the females; conversely, the adult males living in groups only rarely engage in this.

During the day, the guereza alternates long rest periods to periods dedicated to travelling and feeding. Less frequently it dedicates to grooming and to play. 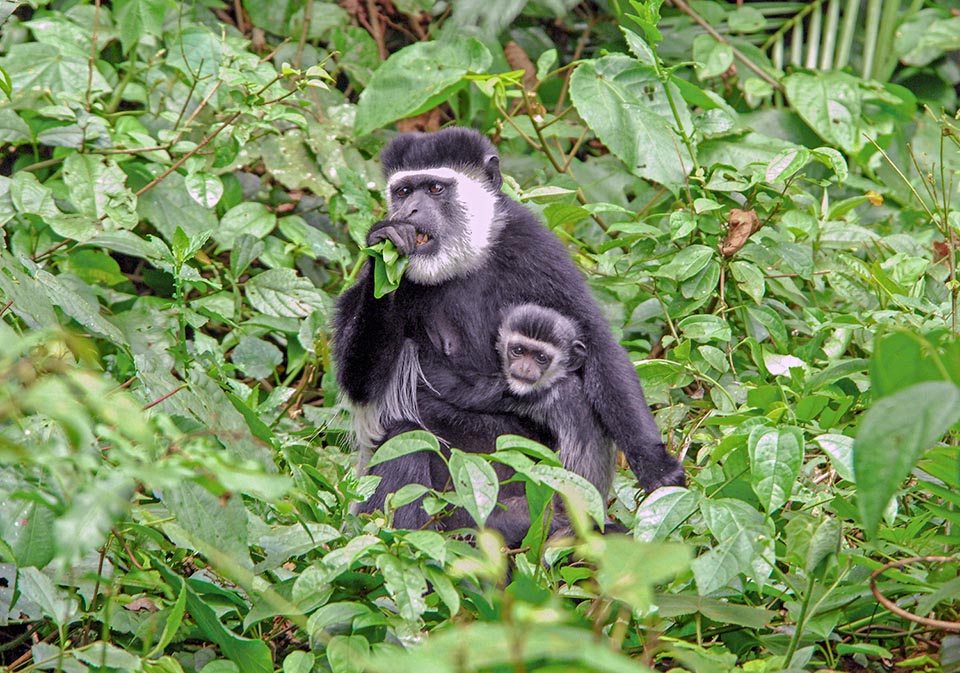 When the members of a group rest, the male places itself higher and slightly separated from the others, to monitor the presence of other groups and potential predators. While moving, the individuals keep all close and follow a unique member who indicates the way.

The most important communication channel is formed by the vocalizations.

The males of guereza emit a sort of strong «roar», mainly during the night and at dawn, so powerful that it can be heard up to a distance of one and a half kilometres.

Eventual males of other nearby groups answer vocalizing in turn.

It is thought that such vocalization is a competitive behaviour between males, finalized also to maintain the territorial distance between the groups. 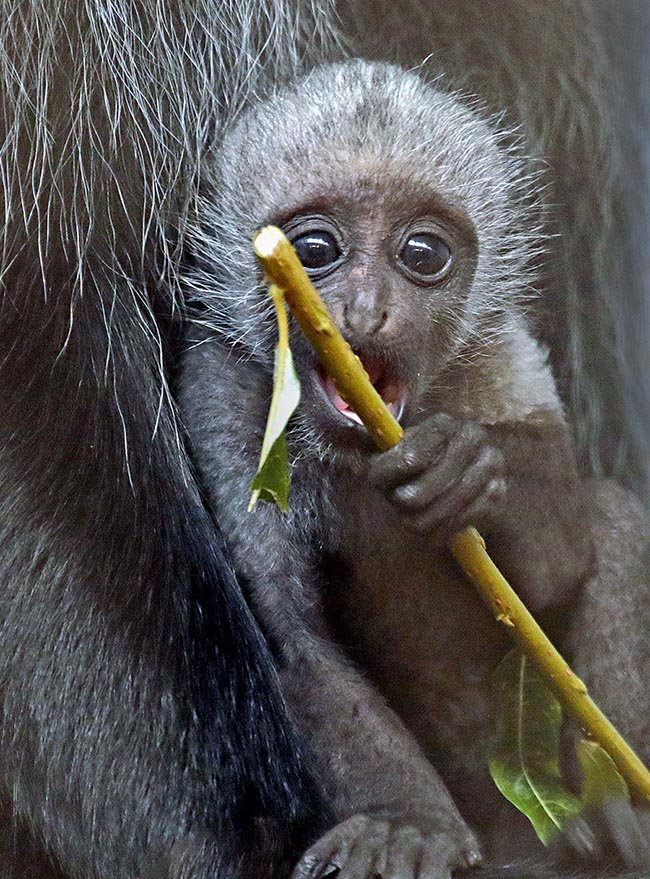 Kids are at the centre of all group members attention, especially females. Upon birth their skin is pink and hairs are white. When 3-4 months old they get same colour of adults and in captivity the lifespan is of 30 years © Johanna Kok

The defense of the territory done by the adult male includes vocalizations, vigorous agitation of the white hair mantle, jumps, chases and, rarely, direct physical attacks.

Besides roaring also other types of vocalizations are emitted.

The males can emit snorts, utilized, possibly, as alarm signals.

Before the various members of the group start moving these can be “purring”. The females and the kids may “croak” when in uncomfortable situations, whilst in cases of major stress, for instance when a baby is in danger, the females and the sub-adults send out warning signals shouting.

Colobus guereza lives in well marked territories, with an extension of about 13-16 hectares, with rare overlapping between neighbouring territories. Encounters with individuals of other groups are not friendly. Conversely, it shows tolerance for those species of primates with whom it shares the habitat, and particularly, to those belonging to the genera Cercocebus and Cercopithecus.

The main threats for the conservation of Colobus guereza are formed in primis by habitat destruction and by hunting for game, hair and skin.

For centuries the Guereza has been hunted in order to use its hair in the clothing world: already Marco Polo witnessed the presence in China of cloaks done with the hair of guereza.

In the nineteenth century they even went so far as to cause its extinction in some areas, with a peak spanning the First World War, when in Europe the “monkey fur ” spread. It is estimated that one to two million of individuals were killed during the greatest demand period.

Poaching continues to a small extent still now, made by local tribes that eat the flesh of guereza and utilize the rest of the animal for ornamental purposes.

The subspecies Colobus guereza dodingae has been sighted for the last time in the Sixties and it is not present in any protected area. The probability that it is extinct is very high, although thorough investigations are needed to confirm this.

The guereza is one of the many species of primate sacred for the Hindu and Buddhist religions, where they represent icons of their gods.