The species is endemic to Cuba where is present only in the province of Pinar del Rio and in the Isla de la Juventud (previously, Isla de Pinos), in the pine forests ( Pinus tropicalis Morelet 1851) seasonally flooded, as well as in the semiarid savannahs, mainly on white sands and quartziferous soils, at low altitudes.

The generic name comes from the combination from the combination of the Greek substantive “κόλπος” (cólpos) = breast, womb, belly, due to the characteristic swelling present around the central part of the stem, and of the name of the genus Thrinax, to which these plants resemble; the species is dedicated to the American explorer and botanical explorer Charles (Carlos) Wright (1811-1885). 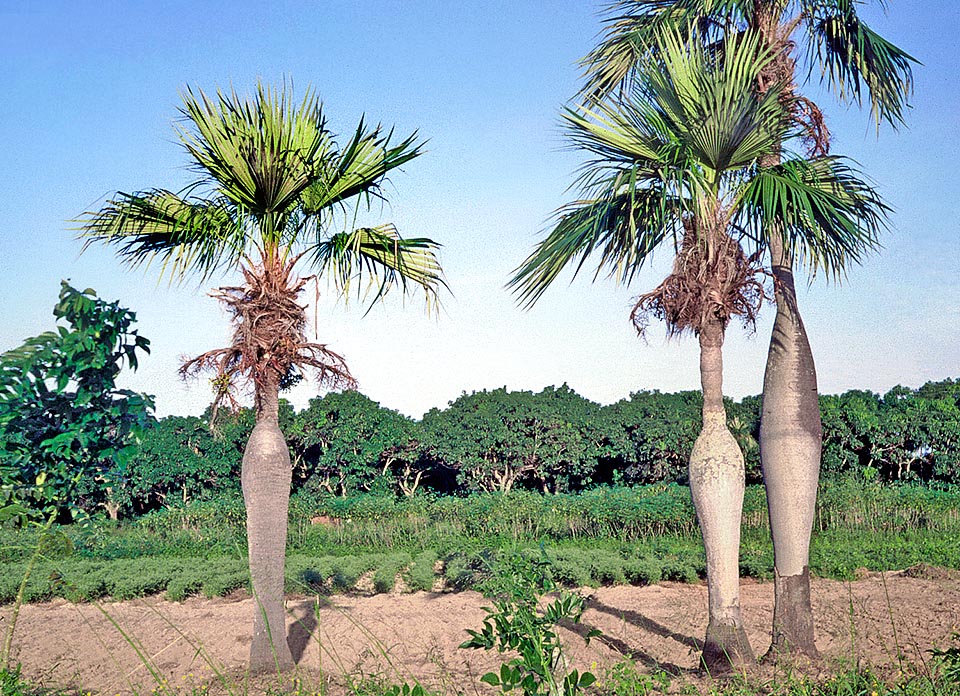 Colpothrinax wrightii in nature. Endemic to Cuba, this palm has a typical swelling in the central part of the stem, water reservoir for the drought periods © Pietro Puccio

The Colpothrinax wrightii Schaedtler (1875) is an unarmed solitary monoecious species, erect, up to more than 10 m tall, with a robust stem of 30-40 cm of diameter that in the adult specimens has, around or under the central part, a swelling of up to 80 cm of diameter, in some instances more, possible adaptation of the plant to the markedly seasonal climate, as water reservoir for the dry periods.

In the young plants the outer surface of the stem is wrinkled, grooved longitudinally and of brown colour, while growing the outer layer detaches, completely or in part, revealing a smooth surface of greyish colour. 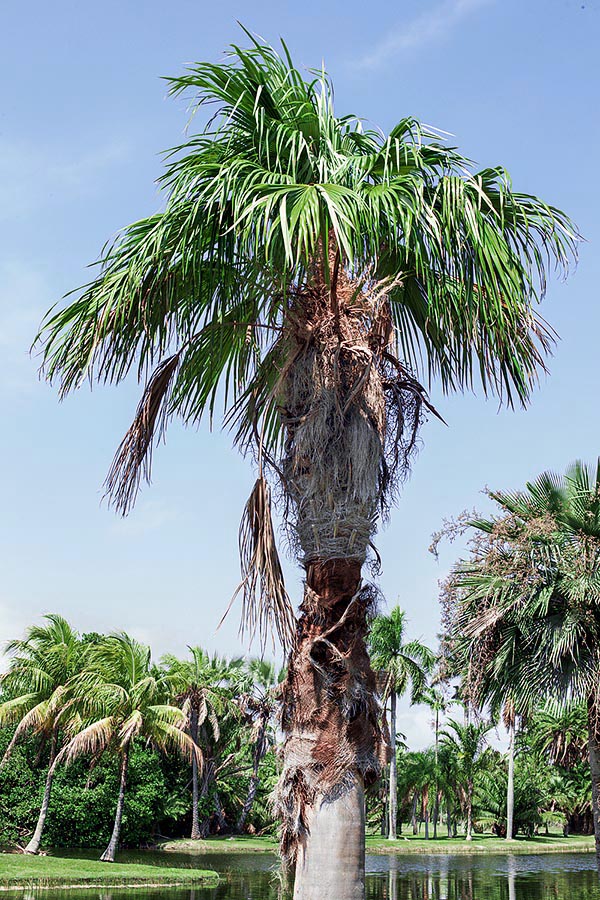 Cultivated, as here near the water, the swelling may be absent. It resists to saltiness and to short thermal collapses to 0 °C, but stands in the “red list”, under risk due to the agricultural expansion and the removal of leaves, usually utilized as cover of rural dwellings, and stems to realize containers © Giuseppe Mazza

Almost spherical crown with leaves, on an up to 1,5 m long petiole, costapalmate, cuneiform, 1,4-1,6 m long, of dark green colour above, paler below, incised in numerous linear-triangular segments rather rigid, with drooping bifid apex, at the centre up to 1,1 m long and about 3 cm broad, united at the base for about one third of their length. The foliar base is provided at the margins of flat interlaced fibers of clear brown colour, 0,6-0,8 cm broad, wrapping the stem in the youngest part. Inflorescences between the leaves (interfoliar), shorter than the same, tomentose, drooping in fruit, with 4 orders of ramifications and numerous rachillae of initially yellow colour, then reddish orange in fruit, 4-18 cm long.

Hermaphroditic sessile flowers spirally arranged, of about 8 mm of diameter, fleshy, of yellow colour, with 3 carpels and 6 stamina. The fruits are globose, 1,5-2 cm long and of 1,4-1,8 cm of diameter; initially green, then blackish brown when ripe, containing one sole seed of 0,8-1,2 cm of diameter.

It reproduces by seed, previously kept in water for three days, in acidic or neutral sandy loam maintained humid at the temperature of 26-28 °C, with germination times starting from about 1 month. The initial growth is particularly slow and the mortality during the first months is high.

The Colpothrinax wrightii is without any doubt one of the most characteristic and particular Cuban plants, but little present off the island, perhaps due to the slow growth and for the less pronounced swelling of the stem present in the plants cultivated in climate conditions and of soil differing from those of origin.

It seems suitable exclusively to the zones with tropical and subtropical climate, not bearing temperatures close to 0 °C, if not exceptional and very short lasting. Requires full sun and draining soils, neutral or acidic, as it badly tolerates the alkaline ones, it can resist when adult to long periods of drought, but in cultivation gets advantage from regular watering in summer, if rains are absent, whilst in winter should be kept rather dry. It moderately bears the salty winds hence can be employed in gardens close to the sea.

The leaves are usually utilized as cover of rural dwellings and for realizing various common use objects. The swollen stem has been employed in the past, and partly is still used, to realize containers of various kind, also for water, troughs, beehives, canoes, furniture and in the constructions, especially as angular supporting element. Finally, the fruits are utilized in feeding the livestock.

Due to the increasing anthropization, the expansion of the agricultural areas, the poor regeneration and, over all, the previously cited use of the stems, the number of individuals in nature has considerably reduced, so much to put in danger its survival, for such reason the species has been inserted in the red list of the IUCN (International Union for the Conservation of Nature) as “vulnerable” (species under extinction risk in nature).