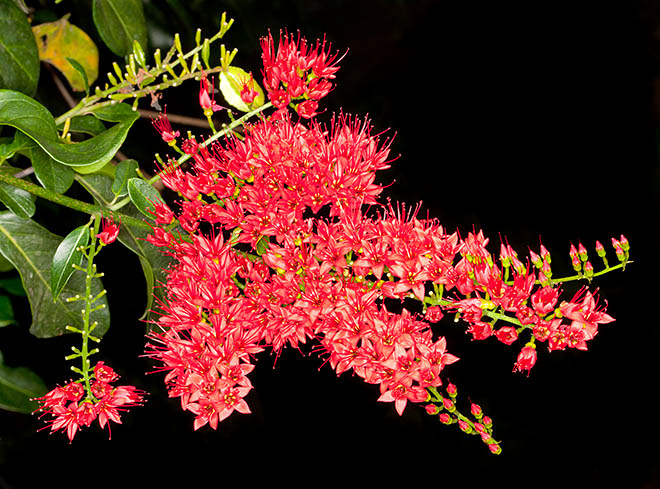 The species is native to Madagascar and Mauritius, where it grows in open spaces as well as at the margins of the forests.

The name given to the species recovers that utilized by Pliny the Elder for designating a species not yet identified due to the description not complete; the name of the species is the Latin adjective “coccineus,a,um” of scarlet colour, with obvious reference.

The Combretum coccineum (Sonn.) Lam. (1785) is a woody, unarmed, evergreen plant, shrubby in the open spaces, sarmentose climber, up to about 6 m tall, when close to big trees on which its flexible branches can lean.

The leaves, on a 1-3 cm long petiole, are opposite, oblong-lanceolate with entire margin and pointed apex, 8-12 cm long and 3-4 cm broad, coriaceous, initially of bronze colour, then glossy intense green. The inflorescences are terminal panicles, 5-15 cm long, carrying flowers of 1,2-1,5 cm of diameter of scarlet colour with tubular calyx about 0,5 cm long, 5 petals 0,5 cm long and 10 prominent stamina, 1,2-1,5 cm long.

The fruits are 1,5-2 cm long samaras with 5 thin membranous wings, which favour their dispersion thanks to the wind, containing one seed only. It reproduces by seed, but, more frequently, by cutting and layering.

Vigorous and fast growing species, appreciated due to its ornamental foliage and the showy flowering, cultivable in the tropical and subtropical zones, its cultivation can be tried in the milder temperate warm climate zones and where the temperatures close to 0 °C are a short lasting exception.

It prefers a full sun exposition, but adapts to a slight shade and is not particular about the soil, even if with preference to the sandy ones; young specimens are to be regularly irrigated in the zones characterized by long warm summers and little or not at all rainy.

It can be utilized, with proper prunings, as isolated specimen in parks and gardens or as climber for creating barriers and for covering fences and pergolas.

Parts of the plant are utilized in the traditional medicine by the local populations.