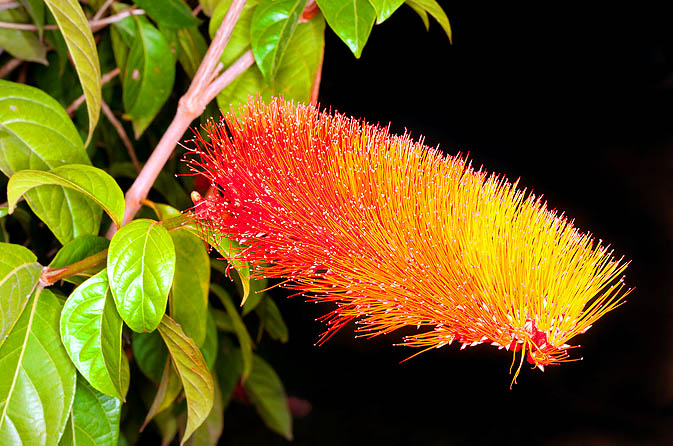 The species is native to tropical South America: Bolivia, Brazil (Acre, Amapa, Amazonas, Para, Rondonia and Roraima), Colombia, Ecuador, French Guyana, Guyana, Peru, Surinam and Venezuela (Amazonas, Apure, Delta Amacuro and Miranda), where it grows in the humid forests at low altitudes, often along the banks of the rivers.

The name given to the species recovers that utilized by Pliny the Elder for designating a species not yet identified due to its not complete description.

The name of the species is the combination of the Latin terms “rotundus” = round and “folium” = leaf, with obvious reference.

The Combretum rotundifolium Rich. (1792) is an unarmed, sarmentose shrub, evergreen, tall up to about 6 m with opposite coriaceous leaves almost without petiole (subsessile), roundish or elliptic, 8-16 cm long and 6-12 cm broad, mucronate (ending abruptly with a sharp point), initially of bronze colour, then bright green. 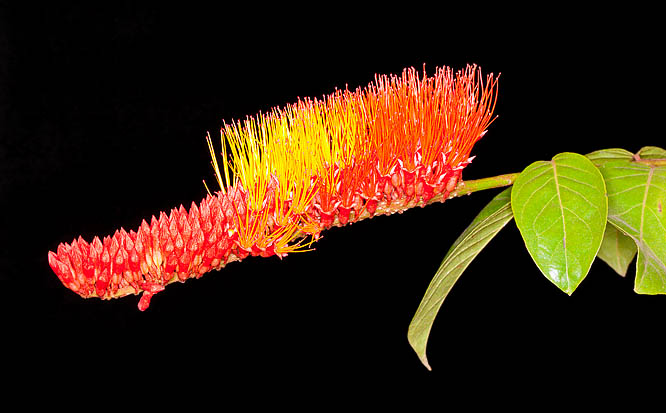 The inflorescences, terminal and from the axil of the upper leaves, are thick spikes, 10-16 cm long, carrying unilateral sessile hermaphrodite flowers, erect or horizontal, with red campanulate calyx, about 1 cm long, with four pointed lobes, 4 red obovate petals which do not exceed the lobes of the calyx and eight filiform erect stamina, about 3 cm long, initially yellow, then orange and finally red.

The fruits are oblong samaras with four membranous wings, which favour their dispersion through the wind, indehiscent (which do not open spontaneously when ripe), containing only one oblong, tetragonal seed. It propagates by seed in sandy soil kept humid at the temperature of 22-24 °C. Species of great ornamental and landscape value thanks to the foliage and the showy inflorescences, cultivable in the tropical and subtropical climate zones, in full sun or slight shade, with lowest temperatures possibly over the 14 °C, even if it can stand some degree less for a short period, possibly with damage to the leaves. It requires light and draining soils; the young plants are to be irrigated regularly in the zones characterized by long warm and dry summers. It bears well the prunings and can be grown with the shape of a bush or as climber in presence of supports like fences or pergolas. Parts of the plant are utilized in the traditional medicine by the local populations.