The species is native to Assam, Bangladesh, Cambodia, China (Yunnan), India, Laos, Myanmar, Peninsular Malaysia, Thailand and Vietnam where it lives in the humid forests up to about 1200 m of altitude.

The name of the genus comes from the local one,“kangi”, utilized in Bengal for this species; the specific name is the Latin adjective “tomentosus, a, um” = fuzzy, with reference to the down covering the various parts of the plant.

The Congea tomentosa Roxb. (1820) is a vigorous wood climber or an evergreen sarmentose shrub, 4-6 m tall, with branches, that in the specimens in nature may reach the 20 m of length, with wrinkled bark and of greyish colour in the old ones, green and tomentose in the young. The leaves, on a 0,5-1 cm long petiole, are opposite, simple, oblong-elliptic with entire margin, pointed apex, subcordate base and prominent veins, 8-16 cm long and 4-10 cm broad, of pale green colour and tomentose, particularly below.

The inflorescences, by late winter and early spring, are axillar tomentose panicles, formed by capituliform cymes opposite and ascending with at the base of each peduncle a bract oblong to cordate covered by a thick down. The cymes, formed by 5-9 flowers, are subtended by 3(-4) elliptic involucral bracts with rounded or emarginated apex, 1,5-3 cm long and 0,5-1,2 cm broad, tomentose, persistent, initially of pink white colour turning with the time violet and finally grey when withering; a variety with white bracts does exist. Flowers with tubular calyx tomentose outside, about 0,7 cm long, with 5 ovate lobes with pointed apex, white bilabiate corolla, about 0,8 cm long, with bifid posterior lip and tripartite anterior and 4 prominent didynamous stamina (2 longer and 2 shorter). The fruit is an indehiscent obovoid drupe enclosed in the persistent calyx; the involucral bracts contribute in the dispersion by means of the wind, as they act as helixes. 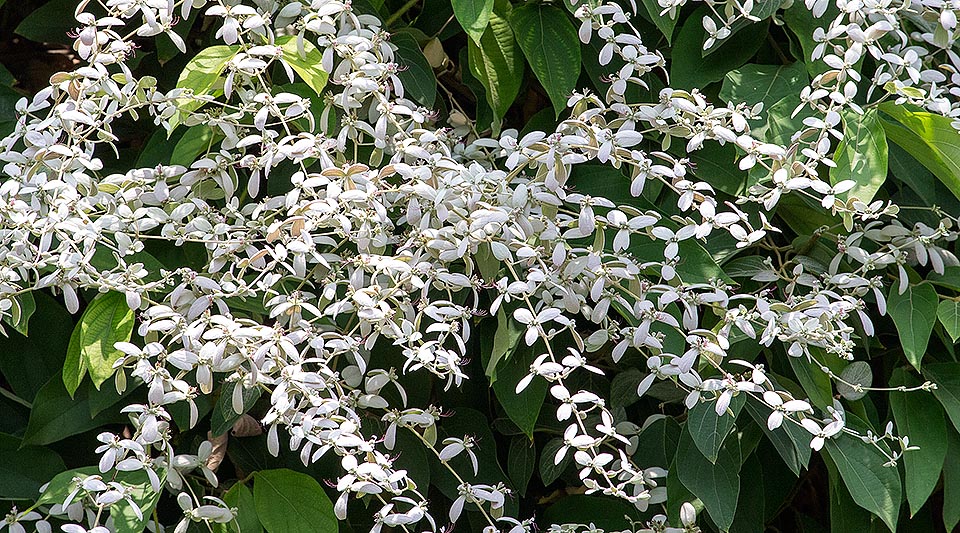 The Congea tomentosa is a strong climber or evergreen sarmentose shrub, 4-6 m tall, with branches that in nature may reach the 20 m of length © Giuseppe Mazza

It propagates by seed, in organic loam with addition of sand or agri perlite per a 30% maintained humid at the temperature of 24-26 °C, by semi-woody cutting, with bottom heat, and air layering.

Species with ornamental foliage and exuberant inflorescences that for about two months with their showy bracts hide the foliage, suitable for the tropical and humid subtropical climate zones, its cultivation may be tried, in sheltered position, in the milder temperate-warm ones, where temperatures close to 0 °C are a short-lasting exception. Utilized as climber needs robust supports, such as pergolas, fences, porches or leaning against walls, or, with appropriate prunings, may be grown as shrub. It requires full sun, even if it bears a slight shade, and is not particular about the soil, provided draining, even if it prefers those enriched with organic material, maintained almost constantly humid; useful are the prunings, after the blooming, for a more compact appearance.

In the adverse climates may be cultivated in warm greenhouse in capacious containers with draining loam rich of organic substance, at the maximum possible luminosity and with lowest night temperatures not under the 15 °C. The waterings must be regular, but without stagnations, and the fertilizations, monthly during the vegetative period, done with balanced products with microelements. The cut inflorescences, long-lasting, are utilized on the floral compositions.