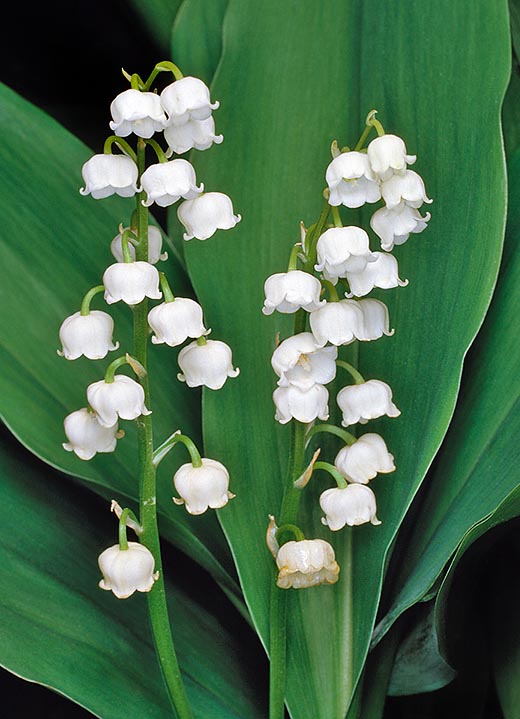 It has Circumboreal distribution (cold and temperate-cold zones of Europe, Asia and North America) with main Euro-Asian range.

The common name is referred to the intense smell of the flowers recalling that of the musk deer, substance emitted by the males of various small deer originating from East Asia in the genus Moschus, for attracting the females.

The lily of the valley is a glabrous, perennial herbaceous plant, (10) 20-30 cm tall, with thin and much ramified oblique or horizontal stoloniferous rhizome, wrapped up by reddened sheaths. Erect, simple, sub-cylindrical-bicutting stem. Two (rarely three) basal leaves elliptic-acute 5-6 (9) cm broad and 13-15 (24) cm long, wrapping the stem at the base.

The fructification occurs from July to October; the fruit is a trilocular sub-spherical red berry with 2-6 (<10) compressed-trigonal, sub-spherical or oval, glossy, striated, yellow-brownish seeds of 1,5-4 x 1,5-4 mm. The fruits are eaten by the birds and by small rodents who provide to their dispersion. The lily of the valley is a self-sterile plant, therefore the individuals developed from a single clone do not produce seed; generally it is a gregarious, mesophilic and semi-ombrophilous species living in the woods, especially of broad-leaved trees (oak and beech forests), thickets, shrubberies and humid stony grounds, meadows and shaded locations, mainly on sandy-silty substrata with neutral pH, slightly acidic or preferably alkaline. Grows from the plan up to 1200-1500 (<1800) m of altitude. 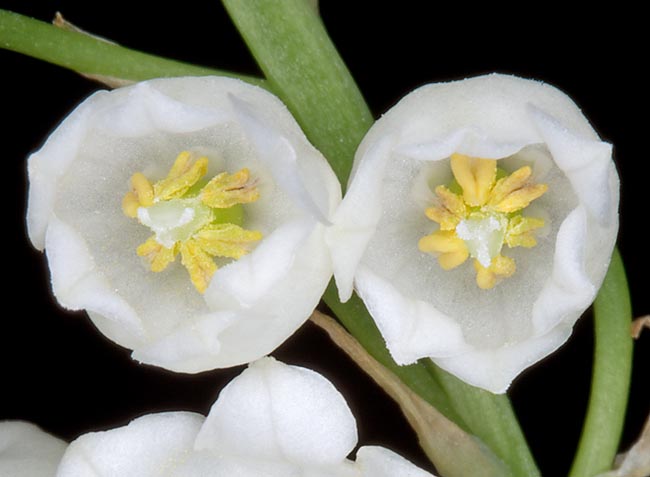 The very perfumed drooping flowers open in May. They have 4-7 mm thin, almost transparent bracts, 7×7 mm candid perigonium, swollen at the centre with narrow opening below, 6 stamina and 6 patent denticles © Mazza

In the language of flowers the lily of the valley means the happiness coming back and often its inflorescences are used for creating the brides bouquets.

In the paintings representing Jesus nativity and crucifixion and in the main events in the life of many Saints, the flowers of this plant were often present as emblem of purity. A Christian language tells that the lilies of the valley should have born from the tears of Our Lady at the foot of the cross.

The cultivation is done in fresh and shaded, light, sandy grounds, mixed with heather and chestnut land. Sowing is little done, usually it multiplies by vegetative way by means of small fragments of 3-4 years of rhizome, spaced of 12-15 cm. About forty different cardioactive or cardenolide glycosides have been identified (convallamarin, convallotoxin, convalloside, convallarin, mialin, locundioside, deglucocheirotoxin, vallatotoxin, majaloside, etc.), and eight flavonoids, besides celidonin, asparagine, citric and malic acids, sugars, resins, as well as saponosids and the poisonous amino acid azetidin-2-carbossilic. The cardiotonic exert their action mainly on the cardiac muscle of which they strengthen the contraction in a durable way and perform in the same time an action on the contractile activity of the heart adjusting and slowing its movements.

In phytotherapy are employed the flowers and the grass (Flores and Herba Convallariae) harvested in full blooming (balsamic time). In the flowers is contained an essential oil to which is due the intense scent of the fresh flowers that is extracted by the cosmetic industry for preparing perfumes. The glycosides convallamarin (mainly present in the flowers) and the convallotoxin are actively cardiotonic, with an action similar to that of the foxglove. The rhizome and also the dried flowers, pulverized, have been used as sternutatory. 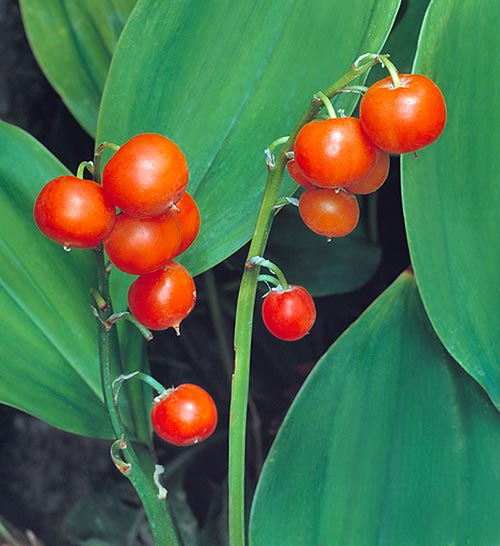 The poisonous fruit is a trilocular sub-spherical red berry with 2-6 seeds. From the flowers, rich of cardiotonic virtues, they get an essential oil used for perfumes © Giuseppe Mazza

The preparation based on the lily of the valley are employed in the cardiac insufficiency of slight and medium entity in the intervallic treatments of the digitals therapy and in the bradycardiac senile heart. The plant of the lily of the valley, due to its toxicity when fresh as well as when dry (especially the flowers and the berries), must be strictly excluded from the family use.

The poisonings are usually due to the ingestion of fresh berries especially by the children and are characterized by general malaise with diarrhoea, vomit, strong diuresis, vertigo and sense of confusion, cardiac weakness, cramps and collapse which may even cause the death unless action is taken quickly with a proper therapy for emptying the stomach, tannic beverages to precipitate the glycosides and antagonist drugs for sustaining the heart.