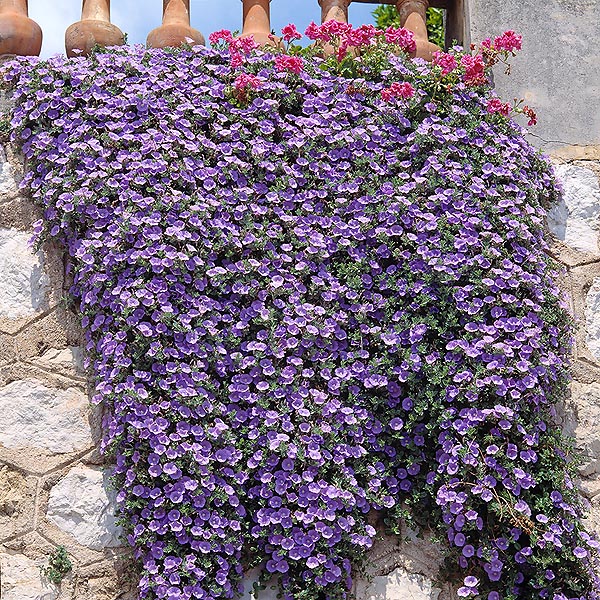 The plant is native to northern Africa (Algeria and Morocco) and Italy, where it mainly grows along the coastline on sunny calcareous rocks up to about 300 m of altitude.

The name of the genus comes from the Latin verb “convolvere” = to wrap, with reference to the voluble stems of many plants of the genus; the name of the species refers to the zone where it is present in Liguria, Italy, that of Capo Noli, close to the old Vada Sabatia (nowadays, Vado Ligure).

The Convolvulus sabatius Viv. (1824) is a rhizomatous, herbaceous, evergreen and perennial plant, 15-25 cm tall, with prostrate stems tending to become ligneous with the age, slightly tomentose, even one metre long.

It reproduces by seed and by semi-woody cutting, in spring-summer. Plant of easy cultivation and little demanding, it adapts to warm and arid climates and to rocky, stony and poor soils, forming a compact cushion of leaves which from late spring to autumn, covers with particularly coloured flowers. The only exigencies are a full sun exposition and a perfect drainage. 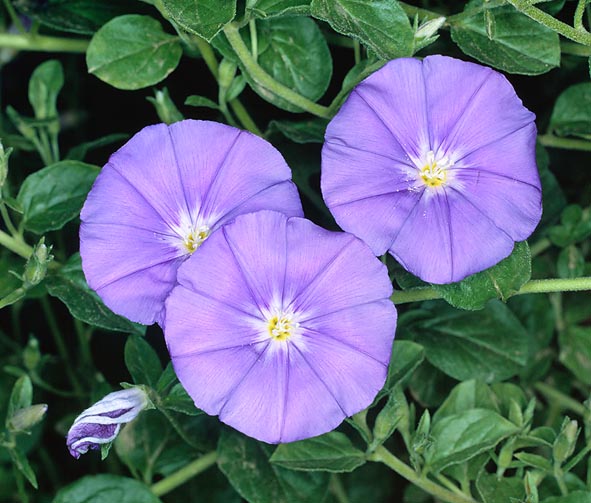 Suitable as soil cover, for spots of colour in the rock gardens, as edge of stone alleys, it is of great effect if utilized as drooping on stone wall or a rocky surface exposed to the south.

Furthermore, it may be employed in proximity of the sea thanks to its resistance to the saline aerosols. Once well rooted, it may be left almost abandoned; the summer watering will have to be limited and spaced.

It well adapts to the cultivation in pot, even suspended, but in such case the summer watering will have to be more regular, but always allowing the soil to dry up before irrigating again.

It bears also rather low temperatures, it resists, in fact, provided placed in perfectly draining soil, to temperatures as low as about -8° C, even if, when getting close to this temperature, it may lose the aerial part.

In any case, in the situations where the climate does not allow the survival in open air during the winter, it may be treated as annual, sowing in sheltered position by late winter at a temperature of 18-20° C, and transferring the plant in place by late spring-early summer.

After some botanists, the plant growing in North Africa is just a subspecies: Convolvulus sabatius subsp. mauritanicus Murb., after others, this is only a synonym, as well as the Convolvulus mauritanicus Boiss. (1841).