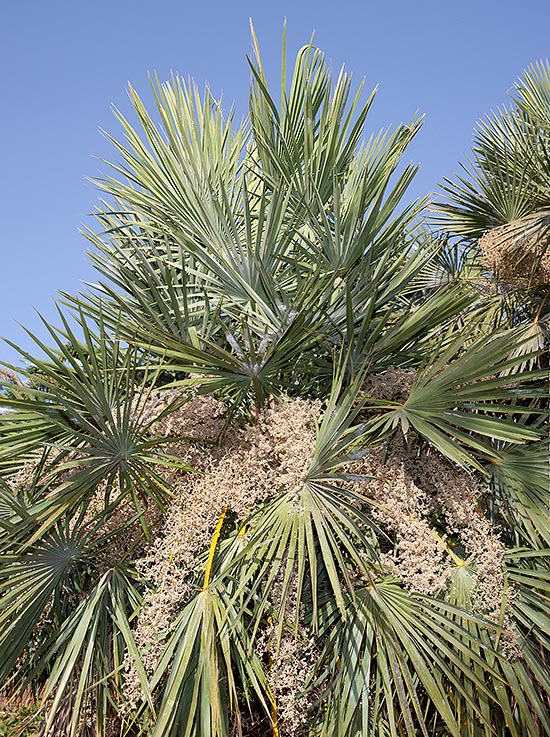 The species is native to Argentina, Bolivia, Central-western Brazil and Paraguay, where it grows in the open forests and in the savannahs subject to periodical floodings alternated with periods of drought when, often, it is the dominant species.

The genus is honoured to the astronomer Nicolaus Copernicus (1473-1543); the name of the species is the Latin term “alba” = white, with reference to the colour of the stem of the youngest plants.

The Copernicia alba Morong (1893) is a rather variable species with erect, solitary, stem of 18-22 cm of diameter, tall up to 25-30 m in the oldest specimens in the wild, covered by the remnants of the petioles of the old leaves in the younger part, smooth in the older one and of whitish grey colour tending to darken with the age.

The leaves, on a 70-80 cm long petiole equipped on the edges with robust thorns long up to 2 cm, are palmate, orbicular, about 70 cm long in the median part, deeply divided into several rigid segments, bifid at the apex, usually of green grey colour on the upper page, silvery grey below and covered by a layer of wax of bluish grey colour, especially in the lower page.

The inflorescences among the leaves are longer than the same, ramified with typical tubular bracts, carrying perfumed hermaphrodite flowers, 0,6 cm long and placed in groups of two, with the corolla covered by a thick down.

The fruits are ovoid, about 2 cm long, black when ripe, containing only one ovoid seed, about 1,4 cm long. It reproduces by seed which germinates in 3-4 months. Much ornamental species, is considered as the most diffused Copernicia in the wild and that with the fastest growth, cultivable in full sun in the zones with tropical, subtropical climate as well as in the warm temperate ones where it can resist to temperatures as low as about -3/-4 °C, values lower than a few degrees are reported in mature specimens and for a very short period with damage to the foliage.

It is not particular about the soil and when rooted may bear dry periods. The wax, gotten from the leaf, is considered of better quality than that of the Copernicia prunifera (which gives the famous “carnauba” wax), but, due to its yield, is little utilized. The trunks are locally employed as poles and in the constructions; the leaves are utilized for making hats and other handicrafts.