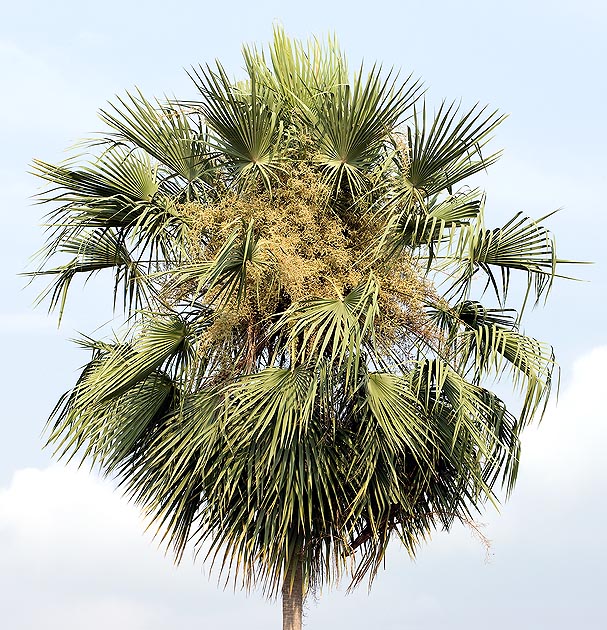 Nice and useful. A prized wax is gotten from the leaves of Copernicia prunifera © Giuseppe Mazza

The plant is native to north-eastern Brazil (states of Alagoas, Bahia, Cearà, Maranhão, Piauì and Sergipe), where it grows chiefly along the rivers or by the borders of water surfaces, often on saline and subject to water stagnation soils, in climates characterized by a marked seasonality.

The genus is honoured to the Polish astro- nomer Mikolaj Kopernik (in Latin, Nicolaus Copernicus; 1473-1543); the name of the species is the combination of the Latin word “pruina” = frost and from the verb “fero” = to carry, with reference to the whitish waxy layer covering the foliar lamina.

The Copernicia prunifera (Mill.) H. E. Moore (1963) is a monoecious plant with single stem, up to 15 m tall and with a diameter of 25 cm, grey, often covered by the residuals of the foliar bases spirally placed, and, curiously, more concentrated in the low part of the trunk than in the part close to the crown.

The leaves are palmate, almost circular of 1,5 m of diameter, with rigid segments united at the base for half of the length, of colour varying from the yellowish green to the bluish green, and covered by a waxy layer, thicker in the lower part; the petioles, about 0,8 m long, are equipped with robust thorns curved at the margins. The inflorescences, about 2 m long, come out from between the leaves and extend little outer from the crown, are ramified and carry yellowish hermaphrodite flowers. The fruits are ovoid, about 2,6 cm long, blackish when ripe, and containing one seed only. It reproduces by seed, which germinates in 1-3 months, utilizing 15-20 cm tall containers; its growth is somewhat slow.

It is a plant with a not yet exploited ornamental value; it’s cultivable, in full sun, in the tropical, subtropical and, marginally, in warm temperate climate zones; as a matter of fact, it resists to temperatures as low as -3 °C, even if for a short time. It adapts to various types of soil, even heavy and little draining and it can bear periods of stagnating humidity as well as of dry. This palm still has a remarkable economical importance for the local populations for the production of the wax obtained from the leaves after the same have dried in the sun; in spite of the high cost of the produce and the competition of the synthetic ones, there are still many firms dedicated to its collection, for the local market as well as for the export. The collection is done in the dry season when its secretion is more abundant, in fact, it is a system of natural protection against the excessive loss of water due to transpiration.

The wax obtained is one of the most appreciated; it has a high fusion point (between 80 and 87 °C) which confers it a particular hardness, the highest among the vegetal waxes, and resistance; it is utilized for polishing floors, cars, furniture, in the alimentary industry and in the pharmaceutical one as covering, in the cosmetic industry and in many other fields; added to the other natural and synthetic waxes, it improves their characteristics. The leaves are still now utilized also for extracting fibres for ropes, handicrafts, artisanal objects and as cover of huts and of makeshift shelters, whilst the stems, thanks to their resistance, are employed in the buildings. The dried roots were utilized in the traditional medicine as diuretic and, burnt and ground, against the rheumatisms, but also as replacement of table salt.