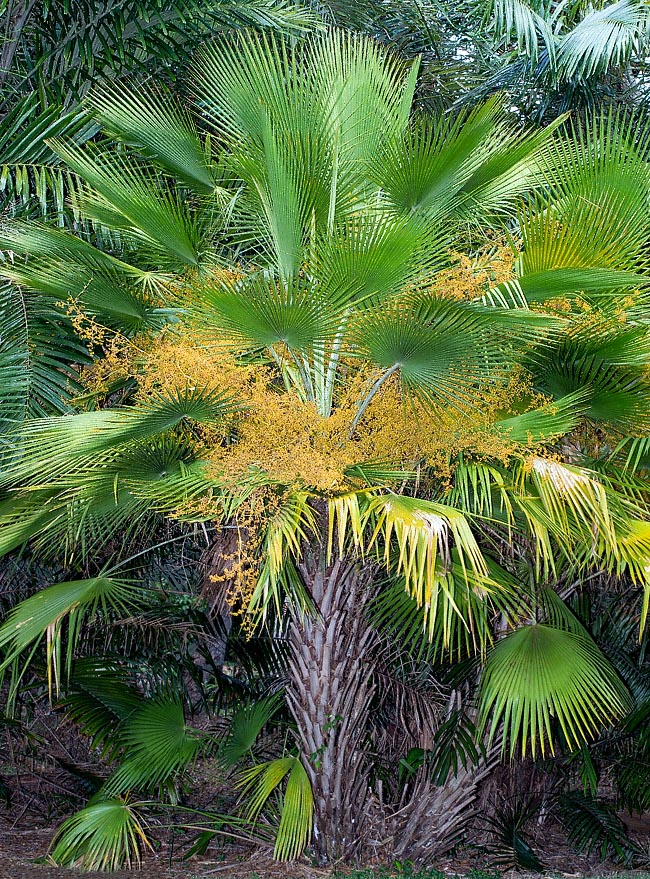 The species is endemic to Cuba where is present in the western provinces of Pinar del Río, Habana and Las Villas and in the Isla de la Juventud (previously named Isla de Pinos), in the pine (Pinus tropicalis Morelet 1851) as well as in the coastal savannahs, at low altitudes.

The genus is honoured to the Polish astronomer Nicolaus Copernicus (1473-1543); the species to the American botanist Allen Hiram Curtiss (1845-1907).

The Copernicia curtissii Becc. (1908) is a monoecious species solitary or, less frequently, cespitous, erect, up to about 7 m tall, with cylindrical stem, of 20-25 cm of diameter, covered by the persistent foliar bases in the young specimens, smooth and greyish in the adult ones except in proximity to the top.

The leaves, on a petiole provided of spines at the margins, up to 1,2 m long and 2-5 cm broad, are palmate, urbicular, 1-1,2 m long, of green colour, incised in 70-80 rigid linear-triangular segments with bifid apex, united at the base per about 1/3 of their length.

Inflorescences among the leaves (interfoliar), curved, 3-3,5 m long, tomentose, with 6 orders of ramifications and rachillae, 0,5-2 cm long, bearing close hermaphroditic flowers, solitary or rarely in pair, with trilobed tubular corolla, 3,5-4 mm long, 3 carpels and 6 stamina united at the base; after the  ripening of the fruits the inflorescences persist for a long time on the plant.

The fruits, that usually develop from one carpel only, are globose, of about 2 cm of diameter,  with the residuals of the carpels at the base and of the stigma at the apex, contaning only one seed of 1,2 cm of diameter.

It reproduces by seed, previously kept in water for two-three days, in acidic or neutral sandy loam maintained humid at the temperature of 26-28 °C, with germination times of 2-4 months. The cespitous plants may be reproduced, with care, by division.

Slow growing species similar to the more famous Copernicia hospita, from which differs, besides some particulars of the inflorescence, due the green colour, instead of glaucous, of the leaves and due to the absence of the waxy patina. 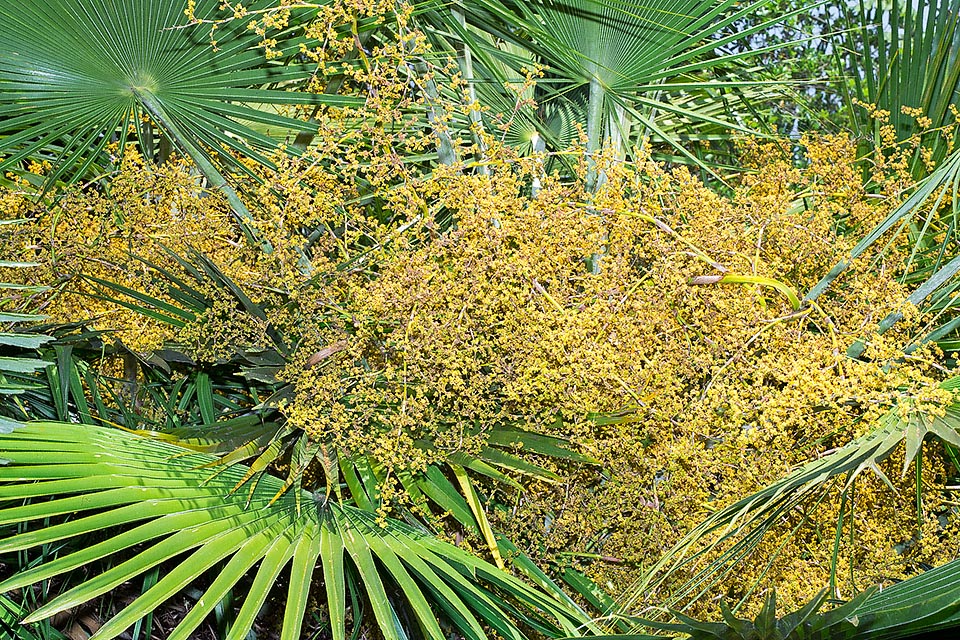 The showy inflorescences, with close hermaphroditic flowers, are interfoliar and exceed the length of 3 m with 6 orders of ramifications © Giuseppe Mazza

Of undoubtful ornamental characteristics, it would deserve a greater diffusion in the regions with tropical, subtropical and marginally milder temperate-warm climates, where it can stand occasional drops of temperature close to 0 °C. It requires full sun and draining soils, preferably neutral or acidic, when adult can stand long periods of drought, but grows stronger if regularly watered in the seasonal climates characterized by long warm and dry summers; it is particularly resistent to the salty soils and winds, consequently can be employed in gardens close to the sea.

The leaves are at times utilized as cover of rural dwellings and for realizing various common use objects.