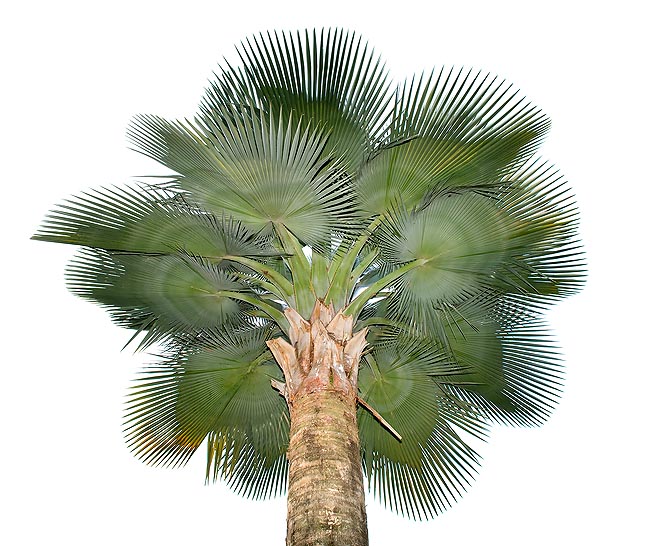 Cuban Copernicia fallaensis is the most imposing Copernicia, but is highly endangered © Giuseppe Mazza

The plant is native to Cuba, where it lives, reduced to few specimens, on clayey soils in the savannahs close to the town of Falla, in the central-northern zone of the island, at the sea level.

The genus is honoured to the Polish astronomer Mikolaj Kopernik (in Latin, Nicolaus Copernicus; 1473-1543); the name of the species is the Latin word “fallaensis” = of Falla, with reference to the town near the place of origin of the plant.

The Copernicia fallaensis León (1931) is a monoeicious plant with single stem, tall up to 18 m, with a diameter of 80-90 cm, smooth, of greyish white colour.

The leaves, numerous, are palmate, orbicular, of bluish green colour with silvery reflexes, with several rigid segments, long, in the central part, up to 2 m, united at the base for about two thirds of the length; the petioles, long up to 1,6 m, are furnished with thorns at the margins, in particular at the base.

The inflorescences come out between the leaves, stretching out a little from the crown, are up to about 3,5 m long, much ramified and carrying whitish hermaphrodite flowers. The fruits are globular, blackish brown when ripe, about 2,2 cm long, with a diameter of 1,8 cm and contain one seed only. It reproduces by seed which germinates in 2-3 months; the growth initially is rather slow.

It is the most imposing of all the Copernicia, of particular ornamental and landscape value due to the robust whitish cylindrical stems and the thick crown with the rigid leaves; ideal for lining wide avenues, or utilized as isolated specimen or in group, in parks and very wide gardens in the tropical and subtropical climate zones; in fact, it does bear temperatures around the 0 °C, or little less, just for a very short time. It requires an exposition in full sun and is not particular for the soil, provided perfectly draining, even if it prefers the alkaline or neutral ones; it may resist to drought periods, but it profits of regular watering especially in the warmest periods.

The leaves are still nowadays utilized, at times cutting down the tallest specimens in order to facilitate the collecting, by the rural population as cover for huts and makeshift shelters, for fabricating hats, baskets and other handicrafts, even though the number of the adult specimens on the wild has reduced to a hundred of units. The International Union for Conservation of Nature (IUCN) has inserted the plant in the highest category of risk of extinction in the wild (“critically endangered”). There are going on, however, interventions done by the local authorities, for the conservation of the plant and of education to its protection, directed to the population.