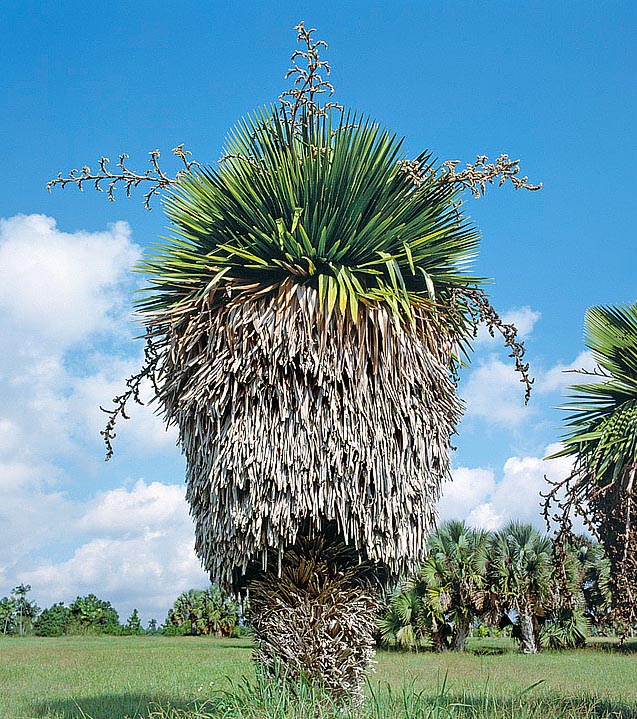 Due to the leaves covering the stem, Copernicia macroglossa of Cuba is called Petticoat palm © Giuseppe Mazza

The Copernicia macroglossa H. Wendl. ex Becc. (1907) is native to the central-western part of Cuba, where it grows mainly in the savannas.

The genus is honoured to the astronomer Nicolaus Copernicus (1473-1543); the name of the species comes from the combination of the Greek words “makros” = big, long, and “glossa” = tongue, with possible reference to the shred of tissue (hastula), particularly evident in this plant, present in the point of insertion of the foliar lamina on the petiole.

Plant with solitary trunk tall up to about 7 m and with a diameter of 15-20 cm, covered in the oldest part by a compact mass of dry leaves which persist for many years. The leaves are palmate with the lateral edges often thorny, of glossy green colour, wide up to 2 m, and divided in several rigid and pointed segments, slightly indented at the borders; the petiole is short or almost absent.

The inflorescences come out between the leaves and stretch outside the same, the bisexual flowers are of a brown yellow colour; the fruits globose, of about 1,5 cm of diameter, are black when ripe.

It reproduces by seed which germinates in about 2 months. Palm with particularly slow growth, but very ornamental for its characteristic look, is cultivable in areas with tropical and subtropical climate in full sun and in well drained soils. The cultivation intemperate-humid climates, in a particularly sheltered position, can be tried, as it does not bear, if not for a very short period, temperatures around the 0 °C.