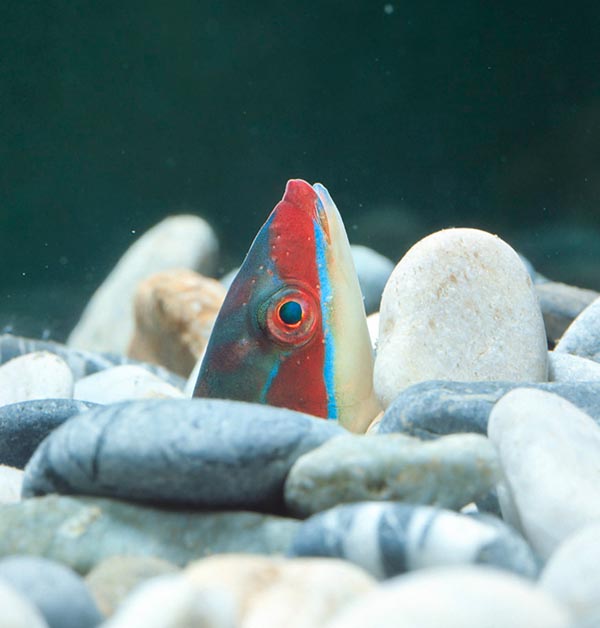 The Mediterranean rainbow wrasse, or in Italian the “Donzella” (= the maid), (Coris julis Linnaeus, 1758) belongs to the class of Actinopterygii, to the order of Perciformes and to the family of Labridae.

The name of the genus comes from the Greek “Κόρη” (kore) which rightly means young girl, maid. Indeed, due to its thin scales, the slender and elegant appearance and the bright tints, cannot but recall images of beauty.

The name of the species, “julis” is coming, perhaps, from the name given by Pliny to an unidentified fish.

With regard to the species, that there is to say that, till Bacci and Razzauti works, it was thought that there were two of them: the Coris julis, bigger, with the first rays of the dorsal long and with a showy red band, and the Coris giofredi, smaller, with uniform rays and brawn shades. Also a sexual dimorphism was hypothesized, but there were some intermediate liveries disturbing the status quo.

The aforementioned works concluded that it was matter of one only species, the Coris julis which is protogynous hermaphrodite.

In nature, and in particular amongst the fishes, there are hermaphrodites changing sex over the time.

We talk about protandrous hermaphroditism when an individual who was male before, becomes female, of protogynous hermaphroditism when it’s the female who, while ageing, becomes male, and of alternating hermaphroditism when, during its life, the individual changes of sex several times. Therefore, our rainbow wrasse, while ageing, becomes a male. But this does not mean that it assumes the nice multicoloured livery because, to complicate things, these two liveries do not depend on the sex. In conclusion, there may be males with the red stripe and the crest and brown males without crest, and vice versa, females with the crest and the red stripe.

It is present all over the Mediterranean, Black Sea included, and it is also common along the Atlantic coasts, after Gibraltar Strait, from Gabon to England.

Coris julis change of sex. The left livery once had lead to hypothesize another species, named Coris giofredi © Giuseppe Mazza

Strictly coastal species, it usually does not exceed the 60 m of depth, but in winter it may be found also at 120 m, where the water is less cold. It loves the rocky zones close to sand or clay banks, under which it disappears during the night or when is afraid in order to escape predators.

The adult males reach the 25 cm, with a record of 30 cm, the females the 18 cm, whatever the colour is. Therefore, starting from the 19 cm, they are all males. 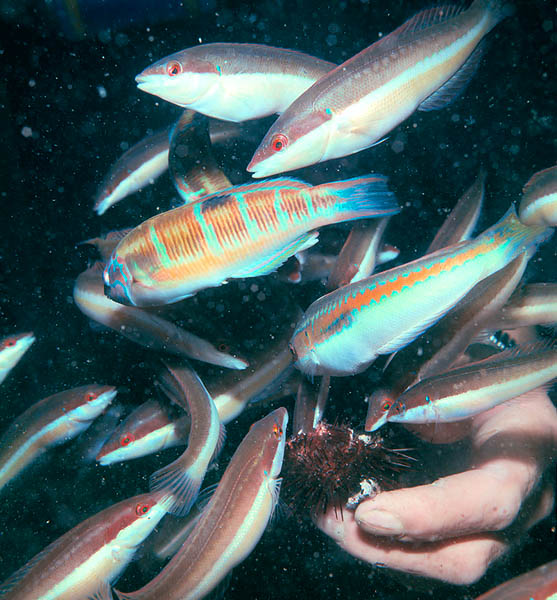 A male, surrounded by its harem, eats urchin eggs. A Thalassoma pavo at centre © G. Mazza

It should be added that, in spite of the aquarists, that the brown form, less showy, is by far the most common.

It has conical head, small mouth with flesh lips and small teeth placed in two rows on both jaws.

Eye and nose are relatively small, seen the tendency to sing into the ground.

The rainbow wrasse is active only during the day, as we would expect from the nice maids. It is never still and looks, restless, for the small molluscs, crustaceans, echinoderms and small worms which form its main course.

If a diver breaks a sea urchin, the Coris julis come in crowds, together with the Ornate wrasse (Thalassoma pavo ) for eating its eggs.

They are not afraid of man, as, seen their size, are little fished, even if their flesh is delicate and tasty, a not negligible ingredient for fish soups.

Sexually mature when one year old, the rainbow wrasse usually reproduces between April and July.

The eggs are pelagic and floating and the young prefer the meadows of posidonias (Posidonia oceanica) rather than the rocks. Usually, the rainbow wrasses live in small crowds of females with a dominant male, and often, when this one passes away, the oldest in the group finds a good reason for changing sex. When in an aquarium, they have a life expectancy of 7-10 years. The vulnerability index of this species is of 39 over 100.