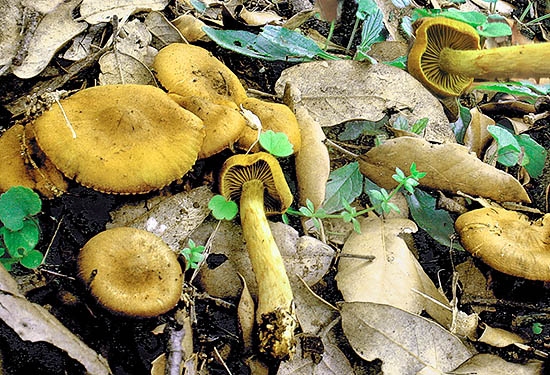 On collection, the section is characterised by the olivaceous tinges and, chemically by the presence of anthraquinonic pigments with the lowest degree of oxidation. (flavomannin 6’6 dimetilether and endocrocin).

This and the bi-hemispherical presence with a restrict number of species, suggests a relict group of very ancient origin, possibly precedent to all other Cortinarius (They appear, according to description, close to subgenus Icterinula exclusive of the Southern hemispbere).

Habit: flammuloid, reminiscent of Cortinarius croceus, but with olivaceous hues. 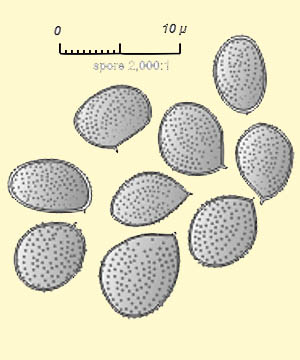 Cap: 20-40 (50) mm bell-shaped, then more plane, slightly umbonate on the disc, frail, cuticle fibrillose, with small scales olivaceous, later on russet and eventually brown, or lemon yellow, on a yellow-olive background, with a darker (brownish) disc

Stipe: sometime shorter, sometimes longer than the cap diameter, 35-40-60 mm x 5 mm, occasionally a bit twisted, cylindrical base slightly swollen, sulphur yellow on top, olivaceous at the base, with the debris of a veil originally yellow-olive, later greyish a finally brown; cortina evanescent.

Contest: almost inexistent in the cap margin, fibrous then fistulous in the central axis yellow-green olive. Smell reminiscent of tobacco containers, or fruity with an earthy background. Taste slightly bitter.

Edibility: unknown, but to be considered suspect.

Typical Dermocybe with flammuloid habit and olivaceous colours. It may be confused with Cortinarius croceus which grows, though, in conifer woods. Though its edibility has not been texted, it is advised against eating small colourful cortinaires. This species can be rather variable with dark olive or citrus hues and spores 6,5-8 x 4-5 or smaller (5,4-6,7 x 4-4,8) and broader. Exams carried out through the DNA found a complex of at least 2 unseparated species.