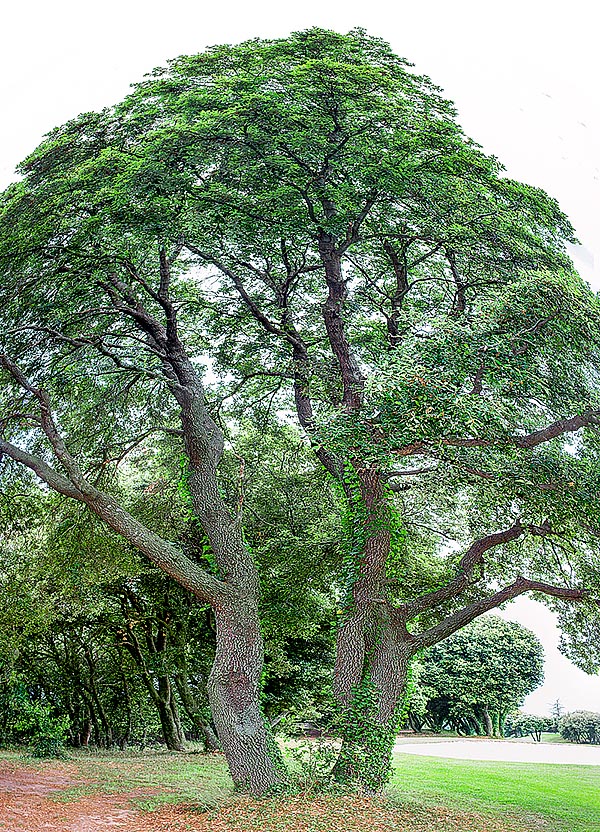 Centennial Quercus ilex. When ripe, this arboreal evergreen species, that eludes the dry Mediterranean summers with robust taproots able to explore in depth the soils, can be even 30 m tall © Giuseppe Mazza

The species Quercus ilex L., commonly known under the name of Holm oak, botanically belongs to the family of the Fagaceae.

The name of the genus Quercus is the one the old Romans gave to the oak.

The specific epithet ilex is known as in use already by the old Romans to indicate the plant of the Common holly (Ilex aquifolium L.), that distinguishes for the leaves of coriaceous consistency and the toothed and thorny margins that may have some resemblance with those of the Holm oak, from which should derive also the name of this arboreal species.

It is a tree with a great longevity, evergreen, with arboreal posture, that when ripe may be even thirty metres tall.

The crown in the isolated specimens presents globose in the whole with very thick and dark green texture of the foliage, particularly appreciated even on an ornamental point of view.

In harsh environments, especially from a pedological point of view, the plants can encounter a marked containment of the vegetative growth, assuming a shrubby posture.

The bark, typically smooth and greyish in the juvenile phases of growth, assumes in the adult specimens a colouration definitely darker, almost blackish, and a corrugated appearance with small polygonal plates.

The rooting apparatus of the holm oak is well developped, also thanks to robust roots of taproot structure, able to explore in depth the soils even if of rocky nature, allowing the plants to survive to prolonged periods of drought.

This particular structure of the rooting apparatus may cause problems of rooting when in phase of transplant. 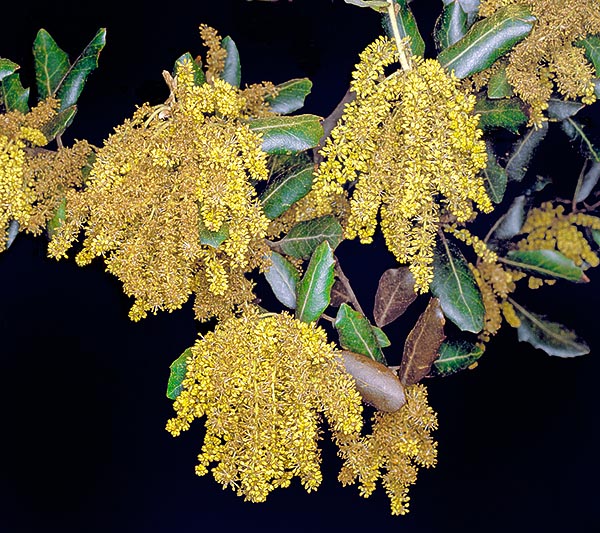 The leaves are hard and coriaceous with a short petiole, representing an interesting example of sclerophylly, recurrent in the vegetal species that have evolved in basically arid environments.

These show a certain glossiness on the upper lamina, characterized by an intense green colouration that contrasts with that of the lower foliar lamina having a tomentose look and greyish colour.

The shape of the leaves of the holm oak is quite variable from elliptic to lanceolate, even rounded, being a species known for having a marked heterophyllia due to the presence on the same plant of quite different foliar laminae varying from 3 up to 8 cm.

The anthesis takes place by the end of the spring period with a pollination of anemophilous type, followed by the fruits production, represented by acorns of dark brown colour when ripe during the autumn of the same year of the blooming.

The acorns, mostly merged in groups, present covered for almost half of the whole length by a characteristic cupule. 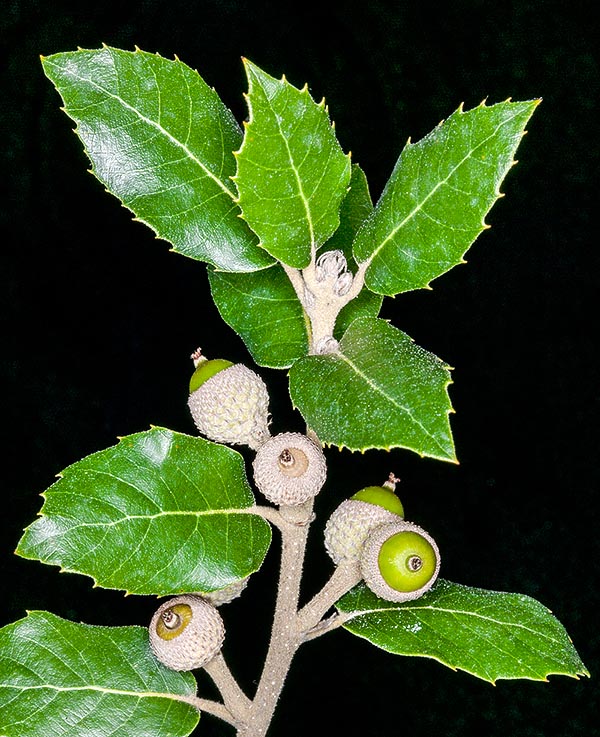 Branch with growing acorns. The holm oak leaves offer us in the same time an example of sclerophylly (adaptation made by the plants in arid sites thanks to hard and leathery foliar laminae to reduce the evaporation) and of heterophyllia (variability of the leaves shape in the same plant) © Giuseppe Mazza

The range of the Holm oak includes a vast part of the Mediterranean basin with particular reference to the Iberian Peninsula, the south of France, besides the Italian peninsula.

In these contexts the Holm oak is able to form even very dense woody formations, called “ilex groves”, where the light intensity under the canopy is decidedly reduced and such to select an underwood of sciaphilous species such as the Butcher’s broom (Ruscus aculeatus L.), the Ivy (Hedera helix L.) and the Laurestine (Viburnum tinus L.).

In the ilex groves form frequently on the ground thick leaf litters formed by dried leaves.

The good capacity of environmental adaptation of the holm oak has allowed also its diffusion close to the sea, as well as in some inner mountain areas with associations with deciduous trees species like the Downy oak (Quercus pubescens Willd.), the Manna ash (Fraxinus ornus L.), etc.

The woods of holm oaks have historically a particular interest for getting firewood and for the production of charcoal that is a quite valid fuel.

Very frequent and appreciated is also the utilization for ornamental purposes of the holm oak in parks and in the historical and modern gardens in many Italian places.

As a matter of fact, it is a tree highly tolerant to prunings, even severe as the crown can be handled in obliged shape.

These are forms of cultivations of the trees with ornamental purpose occurring in many Italian historical gardens, in particular in Tuscany and Lazio as well as in the trees shaping of many Italian cities, also in relation with the fair resistance of the plants to the ambient polluters frequent in the urban areas. 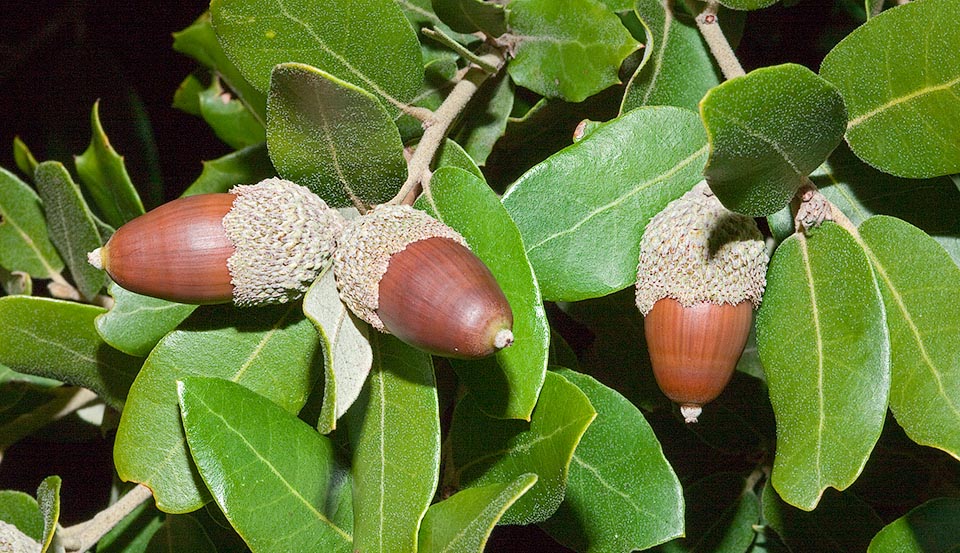