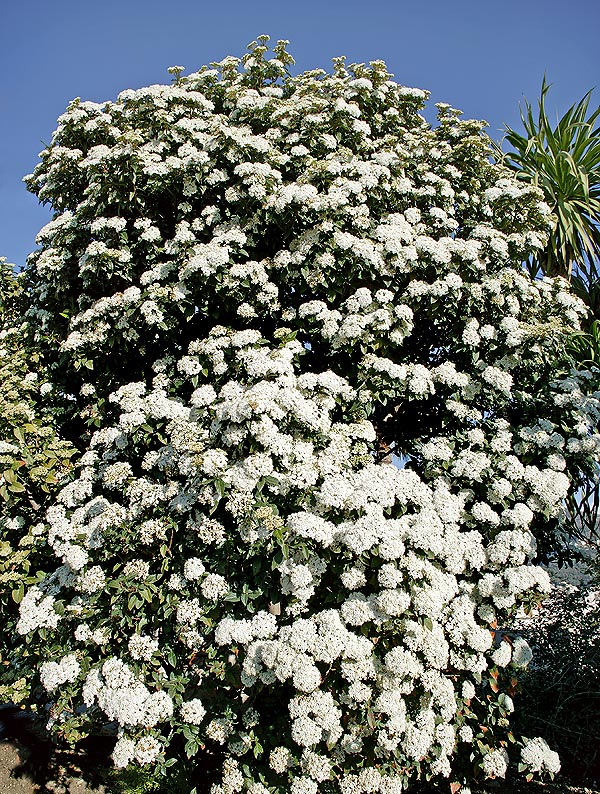 The plant is native to Africa (Algeria, Azores-Portugal, Canary Islands-Spain, Libya, Morocco and Tunisia), Europe (Albania, France, Greece, Italy, Portugal and Spain), Middle East (Israel, Lebanon and Turkey); typical component of the thicket as well as of the Mediterranean under-wood, in association with other shrubby species, like the hawthorn (Crataegus monogyna), the myrtle (Myrtus communis), the strawberry tree (Arbutus unedo), the mastic tree (Pistacia lentiscus), the terebinth (Pistacia terebinthus).

It grows mainly along the coasts, but it may reach the inland and up to about 800 m of altitude in the warmest zones of its home range.

The name of the genus is that with which it was called in Latin a European plant of the same family; the name of the species is the Latin one which was used before Linnaeus and which is still kept nowadays in many common names.

The Viburnum tinus L. (1753) is a much ramified evergreen shrub, compact, rounded, up to about 3 m tall and little less broad, with reddish bark in the young branches, greyish on the old ones.

The 4-10 cm long leaves, on a short petiole (about 1 cm), are opposite, simple, coriaceous, of obovate to ovate form, with sharp apex and evident central nervations; the upper page is of a glossy dark green colour, paler and slightly tomentose the lower one, the edge is entire and ciliate.

It has flat terminal inflorescences of 5-10 cm of diameter with small hermaphrodite flowers united in compound corymbs; the single flowers, slightly perfumed, have a five-lobed corolla, of 3-5 mm, attached at the base on a short tube, externally pink, waxy white internally. In the warmest zones of its origin area, the blooming begins by late autumn and continues for the whole winter till late spring. The fruits are ovoid drupes of about 5 mm of diameter, containing one seed only, of metallic blackish blue persisting on the plant for about one year. Almost all the parts of the plant, fruits included, contain toxic substances. 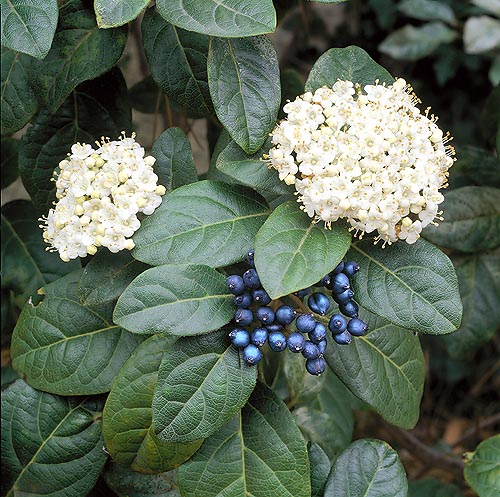 Once, ink was extracted from the berries © Giuseppe Mazza

It may easily reproduce by seed, but usually, and even more easily, it is reproduced by semi-woody cutting in summer, which usually roots within one month, or woody in winter; the growth is rapid in the very first years. Plant is of big ornamental and landscape value due to its thick and glossy foliage, the showy and long-lasting winter blooming and the crowd of decorative fruits which persist for almost the whole year.

Essence widely utilized in the Italian historical gardens, the Viburnum tinus may be employed as isolated specimen, in groups or in mass for hedges, both in full sun and in shade, on an ample variety of soils, provided well drained, being rather intolerant of the soils with stagnating humidity, which manifests with the fall of the foliage and which may lead to the radical rot in the most serious instances.

It reacts well to the pruning, if necessary, and may be variously shaped. Resistant to the low temperatures, seemingly till -15 °C, even if strong frosts compromise the winter blooming, to saltiness an to wind; it bears, if well rooted, also quite long dry periods.

Several varieties have been selected with the time, some of them variegated. Little susceptible to diseases, it may be subject to attacks of parasites, in particular the scale insect, otiorhynchus and acari.