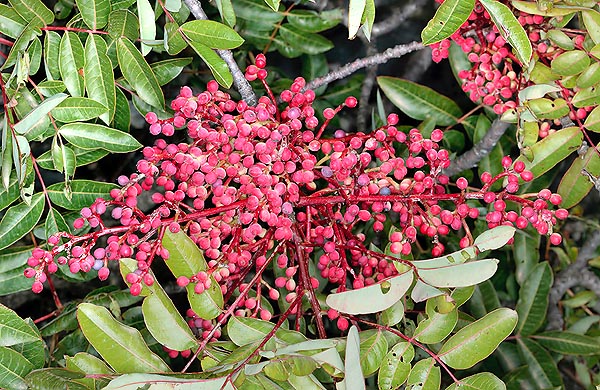 Much ramified, resinous shrub or small tree, with deciduous leaves, dioecious (each individual carries only male or female flowers), tall up to 6-8 m, it shows odd-pinnate leaves long up to 20 cm composed of 3-11 elliptic leaflets, long up to 6 cm and 3 cm broad, coriaceous,, of a dark green colour, glossy on the upper side. The panicle inflorescences, contemporaneous to the issuing of the leaves in spring, are thick and carry small purple red flowers; the fruits are globose red drupes, of about 6 mm of diameter, containing one seed only.

It reproduces by seed, semi-woody cutting or air layering. Some galls, that is fleshy, rich in tannins, outgrowths, produced as a defensive reaction to damages caused by parasites, do often appear on the plant. Spontaneous plant all over the Mediterranean area, it has been utilized, especially in the past, for the resin obtained incising the bark, from which they obtain the so-called Chian or Cyprian turpentine, which has remarkable antiseptic, balsamic and expectorant properties, utilized also in the making of paints.

The tannins obtained from the galls have astringent properties and were utilized for tanning the skins; the anti-inflammatory property of the triterpenoids contained in the galls has been recently demonstrated. The wood, remarkably hard, is utilized in woodwork. Finally, it is utilized, due to its great adaptability to poor, unsuitable to cultivation soils, and to long periods of drought (thanks to its rooting apparatus which develops much in depth), particularly in Sicily, as rootstock in the cultivation of the pistachio.