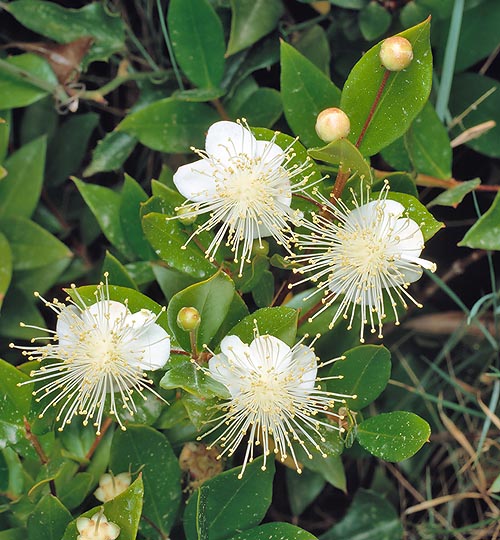 The name of the genus comes from the Greek one “myrtos” of the common myrtle; the name of the species is the Latin term “communis” = common.

The Myrtus communis L. (1753) is a shrub or a small evergreen tree quite variable, ramified, tall up to about 3 m, even if specimens in the wild may reach the 5 m, with ascending branches with a reddish bark, which, with the time, tends to the grey and the thick foliage.

The leaves are simple, entire, opposite, usually sessile (without petiole), ovate-lanceolate with sharp apex, 2,5-5 cm long, coriaceous, of intense glossy green colour on the upper page, opaque pale green below, superficially speckled by oleiferous glands, visible in transparency, which render them particularly aromatic when crumpled.

In summer, the flowers, on a short peduncle, are axillary, solitary, hermaphrodite, of 2-3 cm of diameter, fragrant, with 5 triangular sepals, 1-2 mm long, 5 obovate petals, 6-15 mm long, white or pinkish, and numerous white stamina little longer than the petals. The fruits are fleshy, ellipsoid berries, 1,2-1,4 cm long and of about 0,7 cm of diameter, of blackish blue-purple when ripe, containing whitish reniform seeds, 2,5-3 mm long; there is also a variety with white fruits.

It reproduces by seed, air layering and semi-woody cutting in summer. Rather slow-growing species, typical of the Mediterranean area, it is cultivable in full sun or slight shade on soils of various nature, even if preferring those rather sandy, neutral or alkaline, well drained; it bears the saltiness, the high temperatures, and, well rooted, periods of drought. It is fairly resistant to the low temperatures, as it may resist up to about -6 °C and, if well sheltered, to -9 °C, but with damage to the foliage. 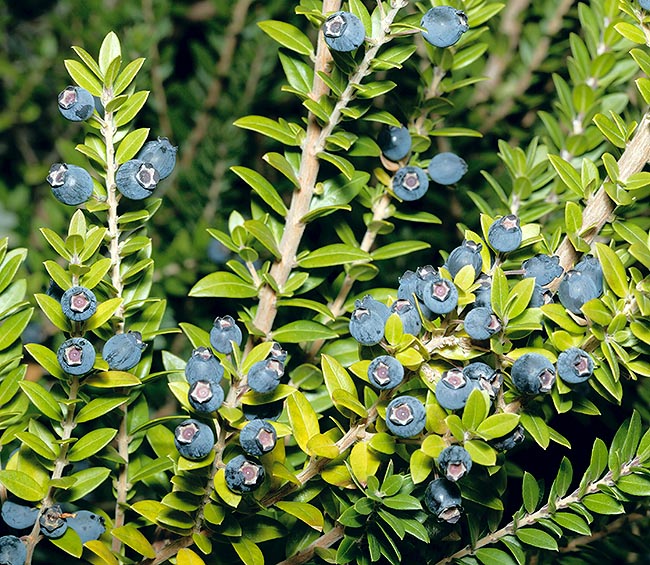 The berries are edible and the aromatic leaves are used in cooking. Medical properties © Giuseppe Mazza

Of remarkable ornamental effect, due to the glossy foliage and the flowering, it is particularly suitable for mixed borders, informal and formal fences, as it may be easily shaped in various forms by prunings, and for this reason suitable also for the topiary art: the dwarf and compact varieties can be used as soil cover and low edges in lieu of the Common Box (Buxus sempervirens), to which it resembles, but with the advantage of having a somewhat faster growth. It is cultivable also in pot, for the decoration of terraces and patios, n sandy soil, rich of organic substance, with regular waterings in summer, especially during the warmest periods.

The berries are edible and in Sardinia, where the plant is particularly common in the wild, they are employed for preparing the famous liqueur, the “Mirto”; the leaves, fresh as well as dried, are utilized in the Mediterranean cuisine and the wood for aromatizing, by means of smoking, many local specialities, in particular in Italy. The wood, of good quality, hard, compact and fine-grained, is utilized for tools, sticks and furniture; it is also excellent as firewood.

Leaves and berries are employed in the traditional medicine for their antioxidant, astringent, antiseptic and expectorant properties; they contain tannins (14%) and essential oil (0,3-06%), formed mainly by myrtenol, cineol, alpha-Pinene, mirtenil acetate, and geraniol. The essential oil extracted from the leaves is also utilized in the food industry, for aromatizing sauces and drinks, and in the pharmaceutical and cosmetic ones too. The myrtle has had an important role in the culture and traditions of the countries of the Mediterranean area, in particular, Greece and Italy.

Two subspecies are recognized: Myrtus communis subsp. communis, described before, and Myrtus communis subsp. tarentina (L.) Nyman (1879), which differs for the contained height, less than 2 m, the close leaves not longer than 2 cm and the globose fruits, particularly suitable for low borders, as soil cover and in the topiary art.

Myrtus communis was last modified: May 2nd, 2018 by Giuseppe Mazza