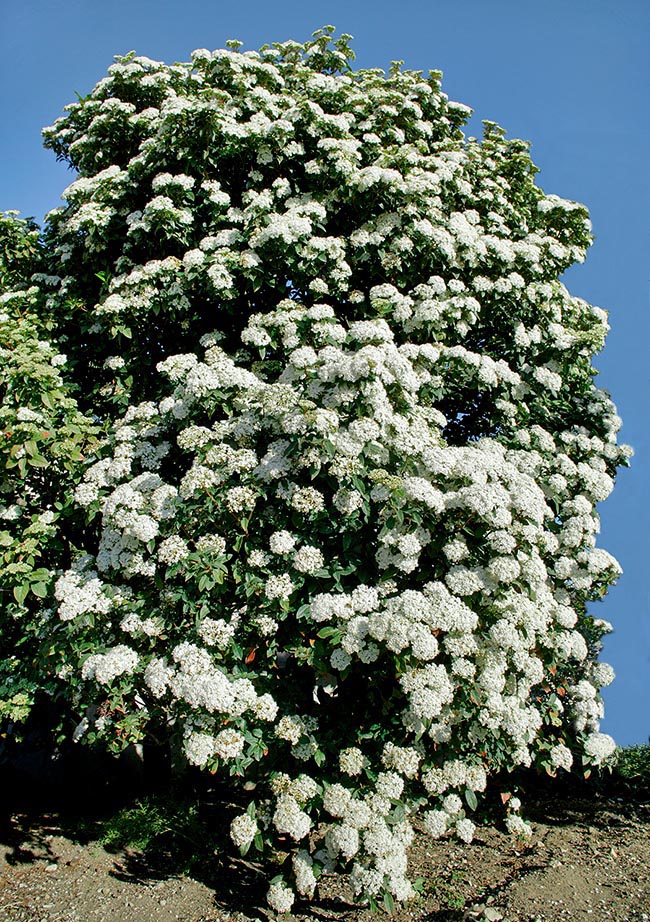 The family Adoxaceae E. Mey. 1839 gets its name from the genus Adoxa that, in its turn, comes from the Greek ἄδοξος (ádoxos), meaning “inglorious, obscure, not important”, probably because of the greenish and rather inconspicuous flowers.

It is a family of Dicotyledon plants of the order Dipsacales, that includes the genera Adoxa, Sambucus, Sinadoxa and Viburnum, with about 200 species.

They are found in North and Central America, in Europe and in Asia.

Previously, these species belonged to the family Caprifoliaceae, but after accurate morphological, biochemical and molecular analysis, it has become necessary the institution of the family Adoxaceae done by the system for the botanical classification “Angiosperm Phylogeny Group IV” (APG IV).

They are shrubs, small trees or, less frequently, perennial grasses, with petiolate leaves, opposite, rarely verticillate, simple or pinnate, with entire margin or, more often, serrate.

The flowers, in cymose inflorescences, are hermaphrodite, almost regularly, with connate calyx divided in 3-5 parts and gamopetalous corolla with 5 petals, but even 4, merged at the base. The lobes of the corolla are remarkably longer than the tube.

The stamens are 5 in Sambucus and Viburnum, or 5,4 or 3 in Adoxa and in Sinadoxa, inserted on the tube of the corolla and filaments fissured in 2 seeds-stamens (Adoxa and Sinadoxa); the anthers are peltate, longitudinally dehiscent.

The staminodes are 5,4, or 3, opposite to the lobes of the corolla.

The ovary is semi-inferior or inferior and the styles are 5,4 or 3, merged or free, or absent, carried by capitate stigmas. The fruits are drupes having one or more seeds. The pollination is entomophile thanks to small flies, bees and butterflies. 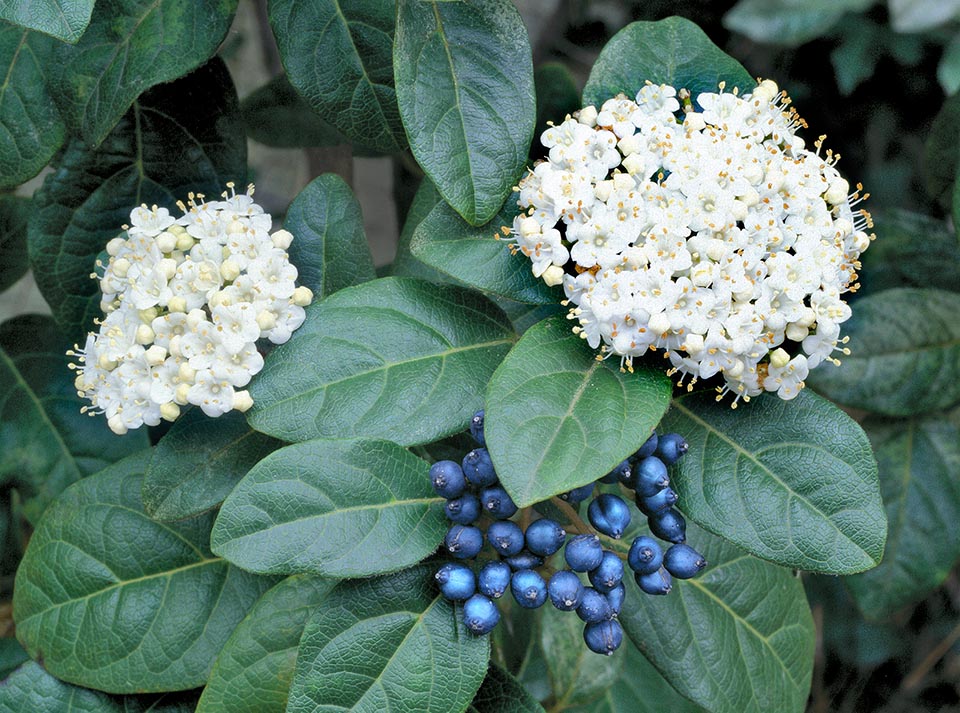 Three meters high, the Viburnum tinus is an evergreen shrub frequent in the Mediterranean gardens as blooming by mid-winter. Yore, from the drupes they got a blue ink © Giuseppe Mazza

The fruits are drupes, usually having 3-5 seeds.

The genus Viburnum numbers shrubs or small trees, with simple leaves and small flowers, actinomorphic, with small calyx, 5 teeth and white corolla, rarely reddish or greenish, campanulate with 5 lobes. The fruits are drupes with only one seed. 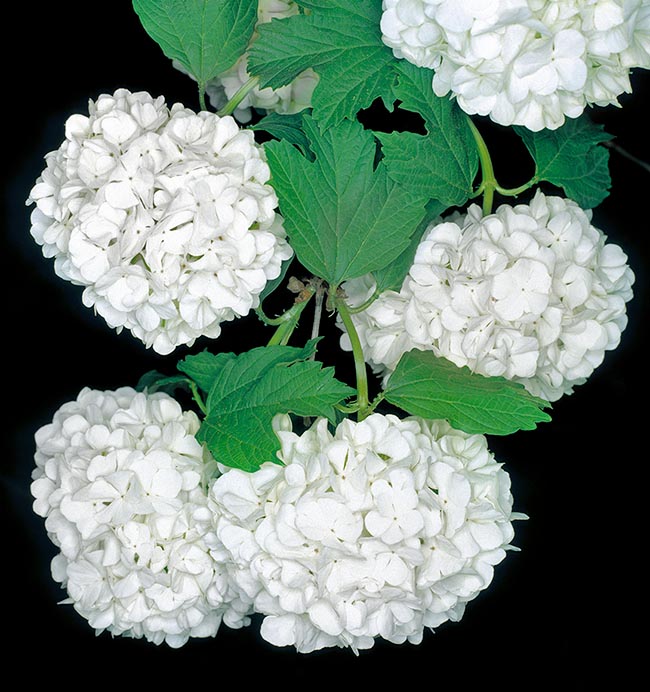 Known as Snowball or Mayball, the Viburnum opulus has odd spherical inflorescences, before green and then white, blooming on the outer apex of the branches covering the shrub. Easy to cultivate, it displays several varieties © Giuseppe Mazza

The genus Adoxa is formed by two species characterized by perennial grasses with creeping rhizomes, filiform, ending in a tuber that will originate the new plant in the following year.

The leaves have petioles, the basal ones are ternate or biternate, the cauline ones are opposite, rarely alternate.

The flowers are grouped in cymose inflorescences, terminal, and are of yellowish green colour with cup-shaped calyx and corolla with short tube having 3-6 lobes.

The stamens are inserted on the tube of the corolla, alternated to the lobes. The ovary is inferior or semi-inferior. The fruit is a greenish drupe.

The genus Sinadoxa, with the only species Sinadoxa corydalifolia C.Y.Wu, Z.L.Wu &amp; R.F.Huang endemic to the Hengduan Mountains (eastern Chinese Asia), has been added recently to the family after the molecular confrontation with the genus Adoxa.

This species is characterized by perennial herbaceous grasses with erect rhizomes and fibrous roots, having small flowers, in groups of 3-5, united in cymose inflorescences.

The calyx is cup-shaped, fleshy, often trilobate and the corolla has a short tube and 3 or 4 lobes. The stamens are inserted on the corolla. The ovary is globose bicarpellate, semi-inferior.

In the popular medicine of the origin areas of some species of the family, are utilized extracts for treating skin lesions, acne, herpes, insect bites, injuries from jellyfish, erythema, eczema, etc. Moreover, they can be utilized to lighten spots on the skin caused by exanthematous diseases, or as mouthwash for rinsing and gargling, or as soothing cream for haemorrhoids and fissures. 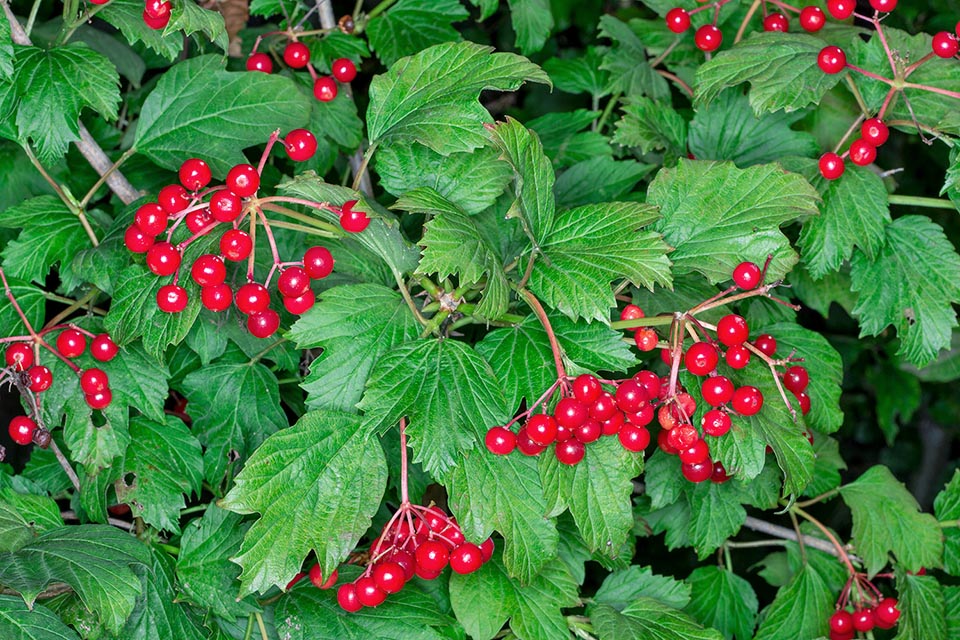 The palmate leaves of this deciduous plant, that can be 6 m tall, recall those of the maple. With its showy edible drupes, they prepare jams and liqueurs © Giuseppe Mazza

In many Mediterranean countries, the extracts obtained from some species of the genus Viburnum are utilized to treat various diseases. Hydroalcoholic extracts of buds of V. lantana have beneficial effects on the activities of neurovegetative regulation of the bronchial tone with an effective calming action of the bronchial spasms. For treating the symptoms of the cold flu, cough, sore throat, is utilized the infusion of the inflorescences. 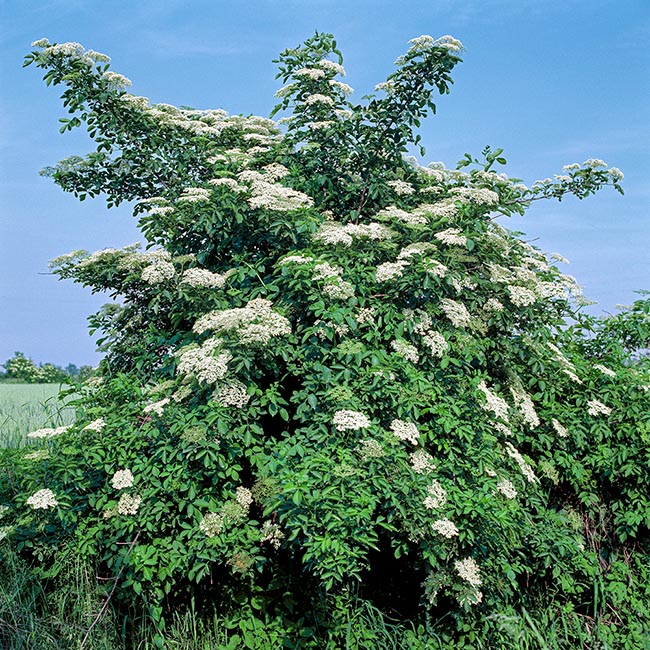 On the wounds, compresses are made to promote healing.

Native Americans used a decoction of bark of V. prunifolium L. to treat the menstrual cramps, to favour the recovery after a delivery and in treating the effects of the menopause.

Thanks to its antispasmodic properties, this species may prove useful also in treating the cramps of the digestive apparatus or of the bile ducts.

The bark of V. opulus L., thanks to its spasmolytic action on the uterine musculature, is utilized in the treatment of the pains related to the menstrual cycle.

Biochemical and chemical studies on the active principles of various species of Adoxaceae, have confirmed the antioxidant effects of the fruits as containing flavonoids and have been also noted antiviral effects by means of the inhibition of the flu viruses of type A and B and to the virus Herpes simplex (HSV-1).

The flowers of some species of Sambucus have diuretic, antitussive, sudoriferous, antirheumatic and emollient properties.

With the fruits rich in vitamin C, of Sambucus nigra L. (not to be mistaken with those of the poisonous Sambucus ebulus L.) and of S. racemosa a delicious jam can be prepared, having mild laxative properties. Yore, the fruits were utilized also as natural dyes.

With the leaves of S. nigra can be prepared an aromatic vinegar called “elderberry vinegar”. 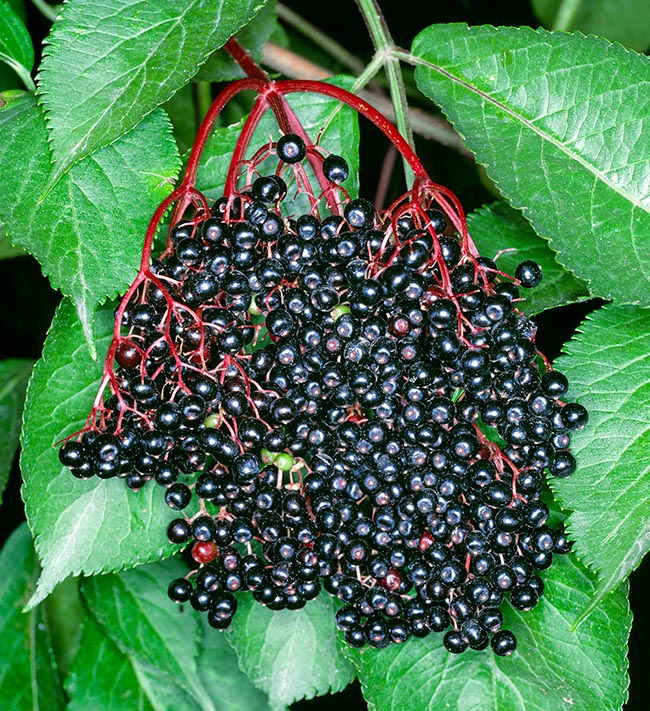 The family has also various ornamental species that are suitable for being cultivated in the gardens.

Some species of Sambucus can be cultivated as isolated plants, like borders, but also thanks to the colours of their fruits.

The most known species is S. nigra, shrub or small tree, up to 8 m tall, with pinnate leaves formed by five leaflets and big inflorescences, of cream colour, present in late spring, followed by clusters of black drupes.

Also some of its varieties are utilized, such as S. nigra  ‘Black Beauty’ with purple-black leaves, and S. nigra ‘Black Lace’ that is good as isolated specimen in the garden, whose leaves, lanceolate  and thin with toothed margin, are of dark violaceous colour, almost black and umbelliform inflorescences of intense red colour with whitish shades that produce black fruits.

Very particular is the variety S. nigra ‘Madonna’ that has a shrubby posture with palmate grey-green leaves with yellow margin in early summer and give black fruits in autumn.

For forming fences, is utilized Sambucus racemosa L. that displays flowers merged in dense clusters, of cream or yellow-greenish colour that, when ripe, form red-coral fruits.

In the gardens are utilized also several ornamental species of the genus Viburnum, such as V. lucidum Mill., fast-growing shrub, with elegant green coriaceous leaves in summer becoming intense red in autumn before their fall. 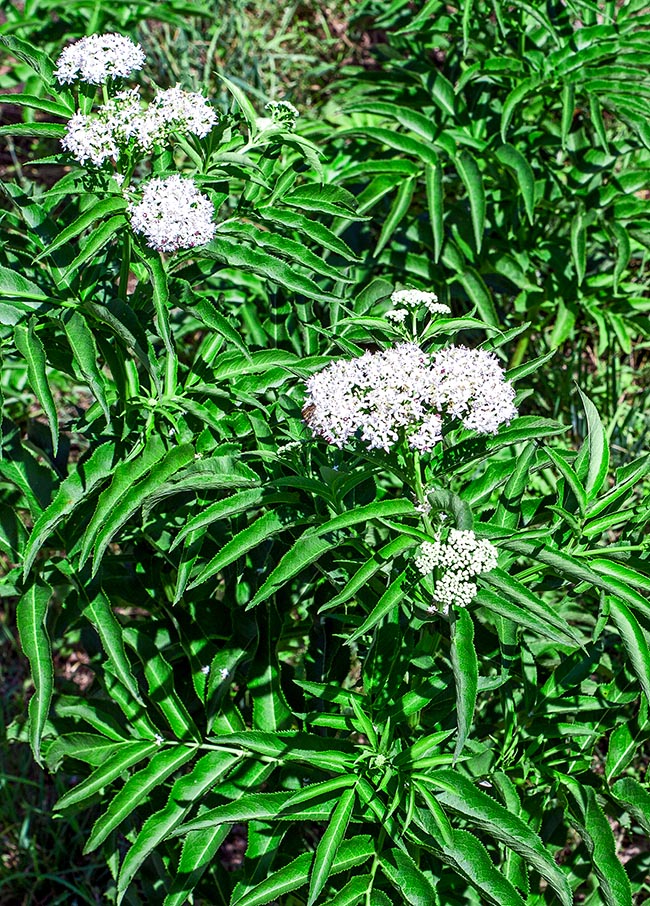 Viburnum tinus, known as laurustinus or laurustine, is a species from which have been selected several varieties suitable to be cultivated in the gardens because of their abundant blooming.

They are varieties good for each corner of the garden and easy to shape in geometrical forms to the topiary art.

V. tinus ‘Macrophylla’ is a plant with erect posture of big size and with big terminal inflorescences, suitable also to form floral compositions.

V. tinus ‘Eve Price’ is an evergreen shrub with small leaves of glossy green colour and white, star-shaped, grouped in inflorescences that are followed by dark blue, almost black, fruits.

Another very ornamental shrub suitable for the cool and abundantly irrigated soils is Viburnum opulus L.

This deciduous plant can reach 6 m of height, has palmate leaves recalling those of the maples. The flowers are of a milk white colour and the inflorescences assume in its whole a spherical shape, and for this reason this species is commonly called “Common snowball”. 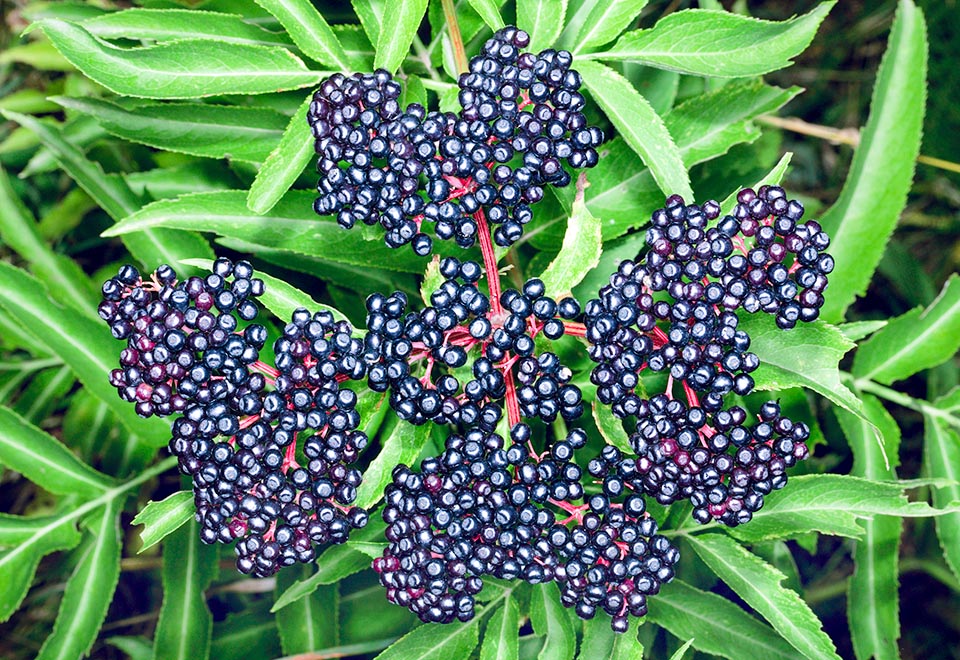 Various parts of the plant have medicinal virtues, but the fruits, not to be mistaken with those of Sambucus nigra, are toxic © Giuseppe Mazza

Viburnum rhytidophyllum Hemsl., native to China, is an evergreen shrub, with drooping posture, that can reach 4 m of height. It has narrow leaves, wrinkly, with wavy margins, of opaque green colour. In spring, it produces cream white flowers regrouped in inflorescences followed by fruits of a lively red colour, black when completely ripe.

It is a fairly rustic species suitable to be cultivated in the gardens as isolated specimen or in groups for fences. 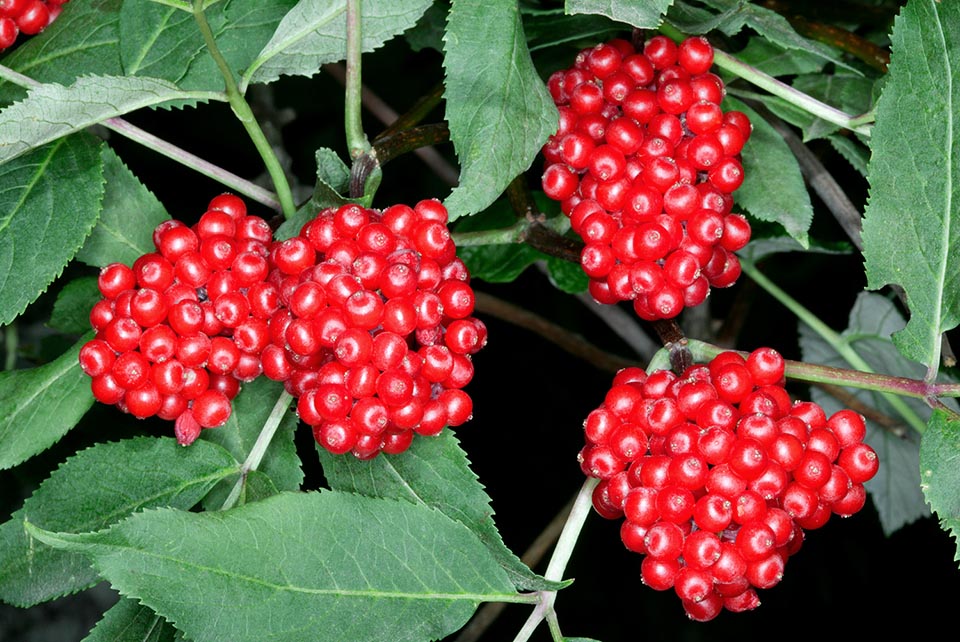 Another ornamental species is Viburnum propinquum Hemsl. This is an evergreen shrub, with lanceolate leaves, dark green, that in spring forms small white flowers, regrouped in umbels. that, in autumn, ripe blue-black fruits.

Several hybrid viburnums do exist. Viburnum x burkwoodii, hybrid form between V. utile Hemsl. and V. carlesii Hemsl., is a shrub that can grow in sunny environments as well as in partial shade. It is up to 2,5 m tall, and, during the spring months, gets covered of white and perfumed flowers. 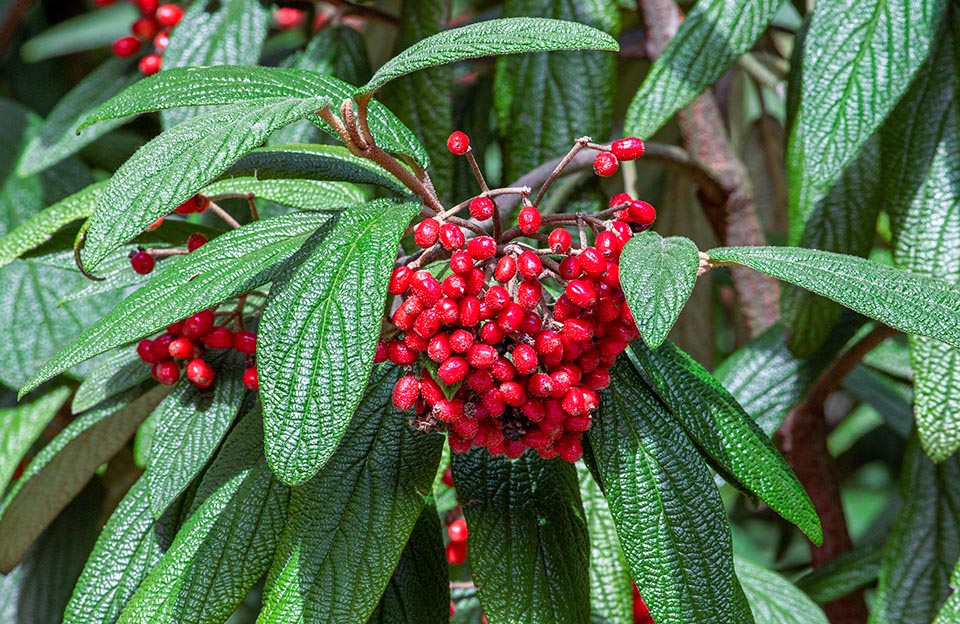 Viburnum rhytidophyllum is an evergreen shrub with drooping posture that can be 4 m tall. It has narrow leaves, wrinkly, with wavy margins, of opaque green colour. In spring it produces white cream flowers grouped in large inflorescences, followed by numerous fruits of a beautiful lively red colour, black when ripe © Giuseppe Mazza

Viburnum x bodnantense ‘Charles Lamont’ has an erect posture with red-brown branches, up to 3 m tall. It requires well drained soils normally exposed to the sun. Its leaves are deciduous, dark green, glossy, and become reddish in autumn. It is early blooming (January-March) and is very perfumed.

→ To appreciate the biodiversity within ADOXACEAE family please click here.