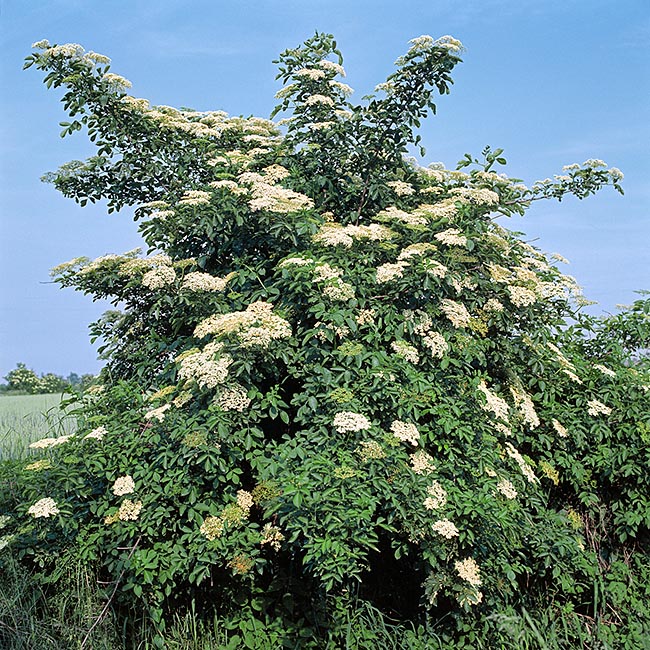 The genus Sambucus is diffused in the temperate and subtropical regions of the world, especially in the northern hemisphere. It includes some thirty species of small deciduous trees and shrubs with pithy stems and perennial herbaceous plants. In Europe are present Sambucus nigra and Sambucus racemosa (shrubs) and Sambucus ebulus (big perennial herbaceous with creeping rhizome). It is reported also Sambucus sibirica, diffused in Siberia and in north-eastern Asia and, westward, up to European Russia, which differs for the size of the rachis, its pilosity, of the petiole and of the foliar nervations, but its admission to the rank of species is still under discussion.

The Black elder (Sambucus nigra - L. 1753) has an European-Caucasian range; it is native to the humid European woods, but amply diffused by the man as medicinal and alimentary plant, and by many species of birds who nourish of its berries, thus spreading its seeds even at remarkable distances from the origin locations.

The name of the genus “sambucus” used by Pliny for indicating the black elder, comes from the Greek “sambyke”, musical instrument fabricated with the branches of this tree once emptied of the pith. The name of the species “nigra”, from the Latin “niger”, refers to the colouration of the ripe fruits.

Already in the Neolithic the populations nourished of the fruits of the elder, as testified by the findings of the excavations done in Switzerland and in northern Italy. The common elder or black elder, is a great shrub, sometimes a small tree, deciduous, fast-growing, up to 8 (The fragrant flowers, with sub-null calyx and tube, have five-lobed corolla, with a diameter of 5 mm, of ivory white colour, which before withering become yellow; stamina carrying white-yellowish anthers, and merged in umbelliform inflorescences (compound corymb), initially erect up to pendulous when the fruits are ripe, with a diameter of 10-20 cm.

The flowering if concentrated from April to June. The fruits are small sub-spherical drupes, with 5-6 mm of diameter, initially green, then reddish and finally black-violaceous and glossy when ripe and contain, immersed in the red blood juice, 2 to 5 tiny oval seeds, convex on a side and angular on the other, wrinkly, brown. The elder is frequent in the humid woods, along the ditches and at the margins of the country roads, close to the farmsteads, on the ruins and in the uncultivated places, humid grounds, rich of organic substance, from the plain up to 1400 m of altitude. It is one of the first plants to begin vegetating, the opening of the buds and the emission of the new shoots starts already in February.

The elder multiplies easily by cutting, layering and by seed. It is intensively cultivated in Austria, Switzerland, Denmark and Canada, where are employed varieties with a greater uniformity of ripening, greater size and great yield of very aromatic juice, like the Haschberg. For ornamental purpose they have selected varieties such as the ‘Laciniata’, with leaves with segments deeply indented or completely divided in 2-4 linear and acute laciniae, the ‘Foliis variegatis’ , with white variegated leaves, ‘Heterophylla’, ‘Flore-pleno’, ‘Rosaeflora’, ‘Pendula’, etc.

In the countries this is a very much known plant; with the well ripe fruits we can prepare an excellent jam, slightly laxative. The floral umbels present an unusual dish when they are collected with the flowers still in bud, dipped in batter and fried, with them they make also cakes, biscuits, pancakes and omelettes. The boys collected the branches, took off the pith and the bark and made with them small pressure shotguns, blowguns, flutes and whistles.

More than 20 species of insectivorous birds (starling, song thrush, blackbird, black cap, robin, blue tit, etc.) avidly nourish of the berries of elder and some of them nidify in the intertwining of its branches, thus contributing to the biological war against the parasites of the cultivations. The decoction of leaves, when concentrated, is insect repellent.

The juice of the berries, of purple violet colour, was used to increase the colour of the red wines and the fishermen used these small fruits as bait for catching the chubs. The cultivators planted it along the levees for reinforcing them and formerly collected its branches for making handles for tools such as forks and shovels due to its resistance, flexibility and lightness; the cabinetmakers, carvers and turners looked for its stumps due to the nice variegation of the wood and from this they got pipes, small handles, combs, boxes, toys and small parts. The pith, on the contrary, is employed in microscopy as inclusive for facilitating the cutting of histological sections and the watchmakers use it for removing oil and the dirt from the delicate gears.

The flowers contain flavonoids (kaempferol, astragalin, quercitin, isoquercetin, rutin, hyperoside), sterols, triterpenes, phenolic acids and their relevant glucosides (chlorogenic, ferulic, caffeic, coumaric acids), essential oil, tannins, resins and mucilage. They are employed in phytotherapy as diaphoretic for treating the fever and chills, and as expectorants and in the colds; for external use they have astringent, decongestant and lenitive activity on the skin. 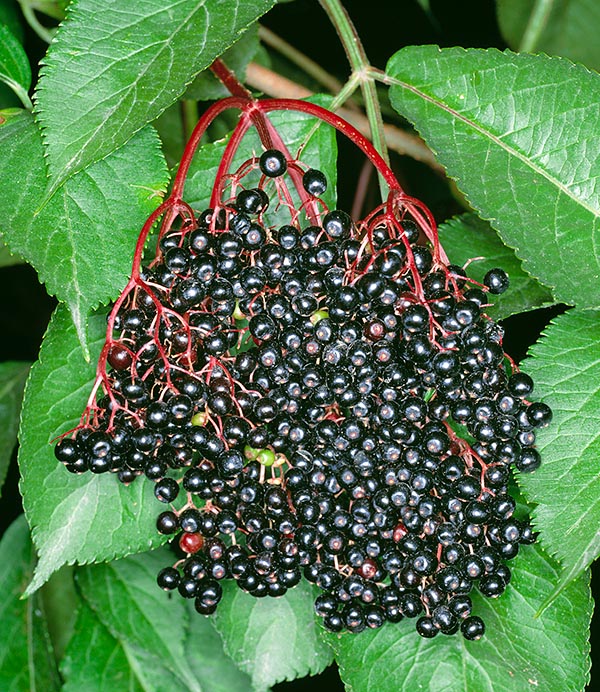 The leaves, collected by the beginning of the flowering, have analogous active principles but contain also the alkaloid sambucin and the glucoside sambunigrin. The bark of the branches, taken off in early spring and previous
exsiccation has purgative and diuretic-dechlorurant action. The ripe fruits dried up in the sun have pain-killing action, in particular in the trigeminal neuralgias and in those of the sciatic nerve; they contain flavonoid glucosides, anthocyanins, sugars, organic acids besides vitamins A, B1, B2, B6, B3, B5, B9, vitamin C, calcium, iron, magnesium, phosphorus, potassium and zinc. Due to their contents of anthocyanins the ripe fruits are employed in the alimentary industry for getting dyes from them.

All green parts of the plant: young bark, inflorescences, unripe fruits and leaves, may cause poisoning. However, the decoction of boiled leaves and then taken off by filtering, and the preparations of fries and batters with flowers and inflorescences are harmless because by cooking the traces of the cyanogenetic substances contained are destroyed, as happens also for the seeds of the fruits transformed in jams.

A spoonful of flowers in a cup of boiling water. Leave in infusion ten-fifteen minutes, squeeze well the residue and drink warm three-four times per day sweetening with honey or sugar.

A handful of fresh crushed leaves with a spoonful of dried bark in a cup of water. To boil for ten minutes and leave to rest a quarter of an hour, sweeten with honey and drink in the morning or evening in case of obstinate constipation.

Put seven great inflorescences of elder, chopped and freed of the largest stems, in 7 litres of water, add three lemons cut in thin slices taking off the seeds, leave to rest 24 hours and strain through a cloth. Add one kg of sugar and the juice of another lemon, mix well and leave to rest for 24 hours more. Pour in dark glass bottles capping firmly and keeping in the cellar. To consume cold after 3 or 4 weeks.