The Common hawthorn (Crataegus monogyna Jacq., 1775) also called Whitethorn, Mayblossom, or Maythorn, is a beautiful species, especially during the time of the flowering and of the ripening of the fruits, with paleo-temperate distribution: western, central and southern Europe, Middle East and North Africa.

The genus Crataegus perhaps coined by the great Greek scholar Theophrastus, gets the name from the Greek epithet “kratos”, strength, due to the hardness of the wood, the tenacity of this genus of plants and their longevity and from “àigon”, of the goats, that is, which gives strength to the goats.

The old Greeks did call with this name the azarole (Crataegus azarolus L.,1753). The name of the species monogyna, means: “with one pistil only”, from the Greek “monos”, one and “gynè”, female. The genus includes more than 200 species distributed in the boreal hemisphere, particularly in North America.

The distribution range of the Crataegus monogyna in Europe extends from the Iberian Peninsula up to England, Scandinavia, Greece, up to the border of Asia Minor. From the plains, it climbs up to 1200 m of altitude, reaching, in the warmest regions, even the 1500 m above the sea level. It lives in bushes, thickets, hedges, xerophilous degraded woods, open thermophilic and mesophylic woods, riparian woodlands. 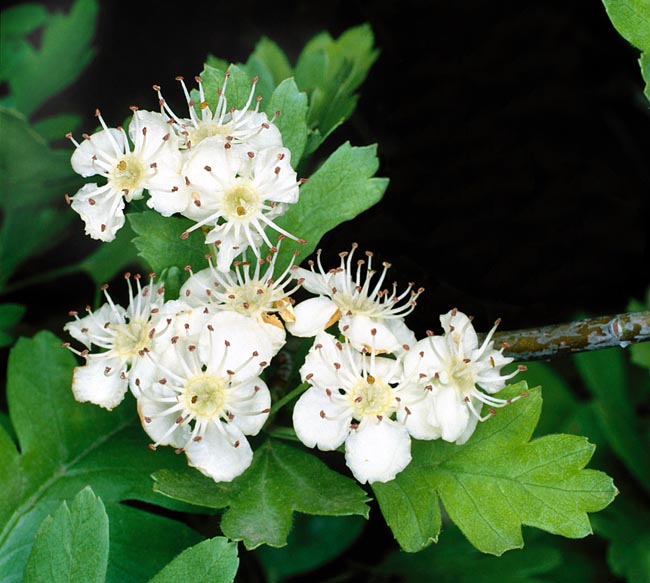 It would deserve, by sure, a greater diffusion, like other spontaneous plants, in our gardens in lieu of many other exotic species completely unrelated to our landscape. In the flowers language, the common hawthorn is the symbol of prudence, but in old Greece and Rome it was also omen of hope, marriage and fertility.

The common hawthorn is a shrub or a deciduous small tree, thorny, up to 5-6 m tall, with wide and intricate crown; strong and twisted branches; strong and long thorns, derived from the apex of small branches. Globular to angular buds, often placed at the apex of brachyblasts. Deciduous leaves, petiolated, alternate (or sub-opposite), with 3-5 cm long coriaceous blade, paler below, obovate-rhomboidal, more or less deeply lobed, with 3-5 (7) lobes having sinuate-crenate or coarse-toothed edge but the lower part. Inflorescences in corymbs with straight and green peduncles.

The flowering occurs from late March to May. The corolla has 5 sub-rounded white petals, with unpleasant smell recalling the herrings (probably the smell attracts necrophagous insects and ensures the pollination). The fruit is an oval or globose, 6-9 mm, pome, coral-red, with mealy pulp having just a sweetish taste, and only one, yellow, seed. Some specimens of common hawthorn are renowned and are reported by the literature, such as that of the Norfolk County in England, or the Bouquetot one in France, which have passed the five centuries and exceeded the diameter of 2 m.

Its wood is prized: light-coloured, with yellow-pink hues, compact, hard, very finely grained and wanted by the wood turners and the cabinetmakers. The branches have a high heating power and are sought for the bread ovens. From the forestal and naturalistic point of view, the common hawthorn is a species useful to enrich the underwood and to form fences nourishing, in the meantime, the wildlife with its fruits (edible also for the man and rich of vitamin C) during the winter and hosts numerous species of insects with the showy lepidopterans Aporia crataegi, Iphiclides podalirius and Eudia pavonia.

Much similar to the common hawthorn is the Midland hawthorn (Crataegus laevigata Poiret DC, 1825, known also as Crataegus oxyacantha L, 1753 and with the synonym of Crataegus oxyacanthoides Thuill, 1779), with Central European distribution range (subatlantic), species preferring more the shade and frequent in the oak woods and closed forests, which distinguishes for having 2-3 styles and 2-3 seeds, foliar lamina with only 1-2 little deep incisions and indented lobes all around. Frequent are also the hybrids between the two species (Crataegus × media). 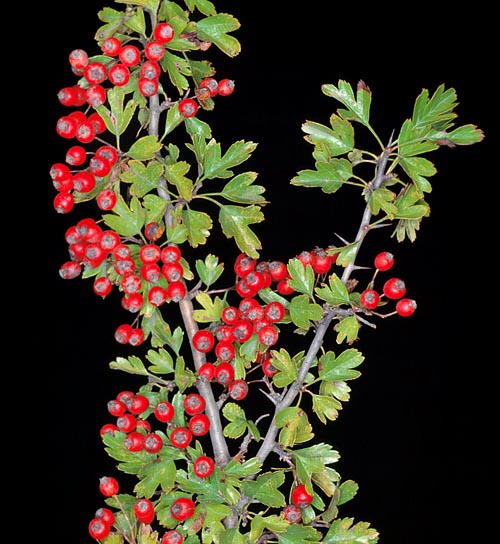 Unlike Crataegus oxyacantha the fruits have one seed only © Giuseppe Mazza

The common hawthorn multiplies mainly by seed, duly treated in order to accelerate its germination (in the wild this operation is granted by the digestive tract of the birds which nourish of the pulp and expel the seed with the faeces, thus spreading the species).

For the herbalistic uses are mainly harvested the flowers by the beginning of the blooming (balsamic time) but are utilized also the bark and the fruits.

The main flavonoidic derivatives present in the leaves are, on the contrary, the epicatechin and/or the catechin and relevant procyanidins. They have ascertained also the presence of simple phenolic acids (for instance, the chlorogenic and caffeic acids).

In the non-phenolic constituents are characteristic compounds such as the pentacyclic triterpenes (for instance, the oleanolic and ursolic acids) and the 2-hydroxy derived of the oleanolic acid, that is, the crategolic acid.

Such active principles confer the preparations of this species cardiotonic, cardio-sedative, peripheral and coronary vasodilatory, cardiac equilibrant, hypotensive, antispasmodic (the flowers) and antipyretic (the bark), properties.

In phytotherapy are used preparations made with flowers in the hypotension and hypertension troubles, in the cardiac neuroses, in the palpitations and in the anguish generated by the menopause, insomnia, emotionality, stress, autonomic imbalances, arterioscleroses, coronary insufficiency and angina pectoris. Their action is also useful in various nervous disorders and in the vertigoes.

The extract of Common hawthorn or the decoction acts as antibacterial against Shigella flexneri, Shigella sonneni, Proteus vulgaris and Escherichia coli.

We suggest two simple preparations such as the Honey, sedative for the heart and in the anguishing conditions of the menopause, in the autonomic imbalances: the tip of a knife of ground flowers mixed with a teaspoon of millefleur honey. To be consumed three times per day. An infusion for favouring the sleep is prepared with a teaspoon full of flowers in a pot of water. Let infuse for a quarter of an hour, for the children to add some honey, for the adults a spoon of grappa or brandy, and drink before going to bed.

Crataegus monogyna was last modified: May 3rd, 2020 by Giuseppe Mazza