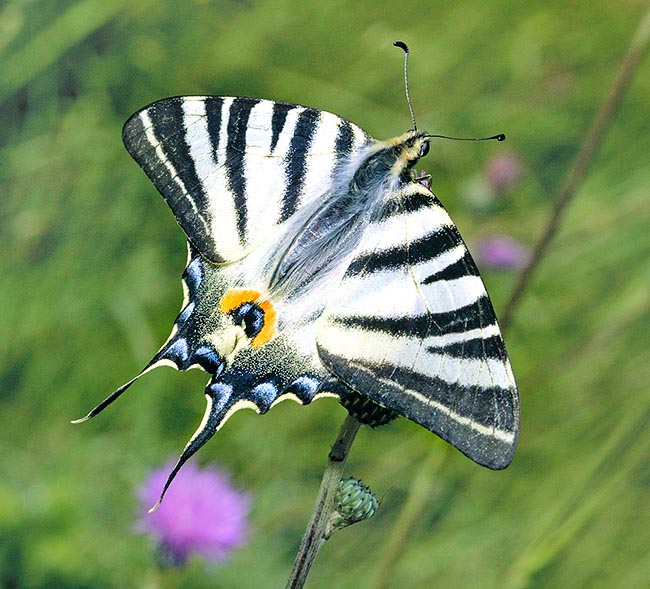 The Scarce swallowtail (Iphiclides podalirius Linnaeus 1758) belongs to the order of the Lepidoptera and to the family of the Papilionidae, group of butterflies standing among the showiest and most diffused in the whole planet.

This species, along with the Old world swallowtail (Papilio machaon), shares various records and characteristics within the palearctic winged world.

They are in absolute the biggest among all our diurnal lepidopterans, have the tails longer than any other butterfly, both are called “swallowtail”, have the most elegant shape, have wonderful and delicate colours, share the same territories and the scientific names are linked to one common Greek mythological tradition.

The scarce swallowtail is by many deemed the most beautiful butterfly of the Palearctic, leaving behind the old world swallowtail itself due to some morphological characteristics and due to the different elegance.

It is a butterfly with lithe and slender body, so much to exceed in length, unique in the Palearctic, the same measure of the wingspan. It has two tails reaching to two cm of length, quite evident when flying and that give it an astonishing elegance. It has a light and delicate flight which sees it often sailing at the slightest breath of wind, without any wing beat, like a wonderful and lifeless leaf. Even if the old world swallowtail is beautiful, due to these last peculiarities we might state without a shadow of doubt that the scarce swallowtail is its aristocratic version.

As said before, the scientific name is related to the Greek mythological tradition. The genus Iphiclides recalls in fact Iphicles, a half brother of Heracles, whilst the species podalirius evokes the brother of Machaon, both Greek physicians who took part to the expedition against Troy. 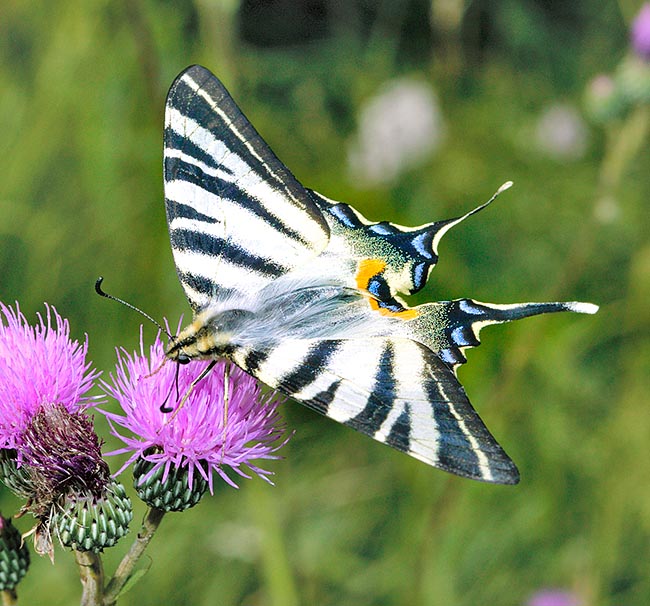 Both are splendid swallow tailed butterflies but it has nobler drawings and motions, with often planed flights © Giuseppe Mazza

The European vulgar names are quite interesting in the description of this butterfly. Scarce swallowtail, in English; Flambé, in French; Segelfalter, in German; Chupa leche or Podalirio, in Spanish; Koningspage, in Dutch.

The scarce swallowtail is diffused in Europe, in all temperate Asia and in northern Africa.

It is also present in some areas of China where it marks the most extreme point of its eastern range.

North, it is absent in northern Scandinavia, and practically from almost all England, rightly in strict connection with the vulgar name assigned to this butterfly.

It is often migrant and the specimens met beyond the coasts of the North Sea and of the Baltic are considered as a consequence of these movements.

Europe is clearly divided in two parts by a geographic line limiting the presence of the two main subspecies of this butterfly: Iphiclides podalirius feisthameli living from the Pyrenees and the south of France and in all the Iberian Peninsula and the Iphiclides podalirius podalirius in all the rest of the Euro-Asian continent. There is a melanic form, the lucifer, quite rare and sighted only a few times.

It frequents temperate forests, plains, orchards and flowery gardens but it can be found wandering in any location. It is met from the sea level up to 1700/1800 m of altitude. 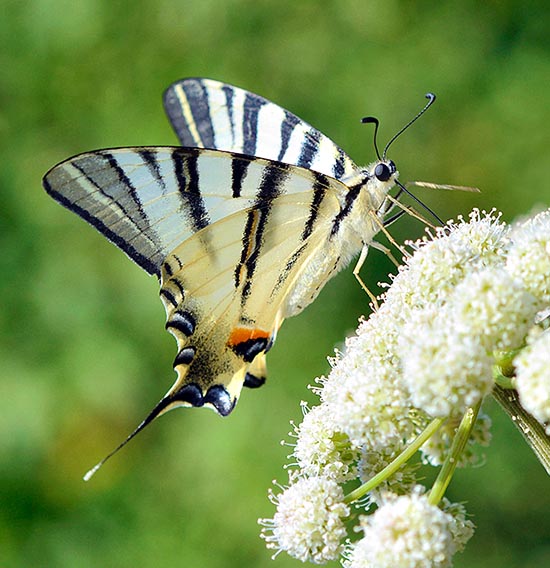 It frequents gardens, temperate forests, plans and orchards up to 1800 m of altitude © G. Colombo

It is not easy to find in the wild specimens with the tails perfectly undamaged as it seems that they have a function of defensive mimicry towards the aggressors, as they have close to them a well visible orange ocellus that makes the tail to seem a fake head. For this reason, on specimens flying from some days it is often noted a chipping or even the absence of these appendices.

It has remarkable alar measures seen that it reaches even the 90 mm of wingspan but also specimens of only 65 mm are found. The seasons, the climate, the abundance of food often determine the size of this butterfly.

The butterfly is easily distinguishable for the particular flight as well as for the colour, unique in its genus. The upper face of the fore wings is whitish yellow and is crossed by six black vertical lines merged in pair that, starting from the coast, reach the lower margin of the wing. The lower wing has only one black vertical stripe close to a very ample basal belt and of the same blackish colour. In the sub-marginal area are present ample bluish drawings that form three quite evident marks giving the impression of a false indentation of the wing. Always in the lower basal area is situated a black outlined blue ocellus, placed at the centre of a large orange spot.

The subspecies feisthameli is noticeably more marked in the black lines so much to seem a melanistic form of the scarce swallowtail. Also the ocellus is bigger and more marked and has a big black pupil at the centre. The drawings present on the upper face of the wings are faithfully repeated on the verso. The abdomen is black and the antennae are not long if compared with the strong wingspan. It is a very precocious species and it can be seen flying since the month of March up to all September.

It is common in the Palearctic but is never found in great number. It is a species always moving and covers vast areas aimlessly except that of sucking the nectar on every interesting flower. There is no sexual dimorphism apart a slightly bigger size of the female. The summer generation is paler in the colour and is less marked on the wings. 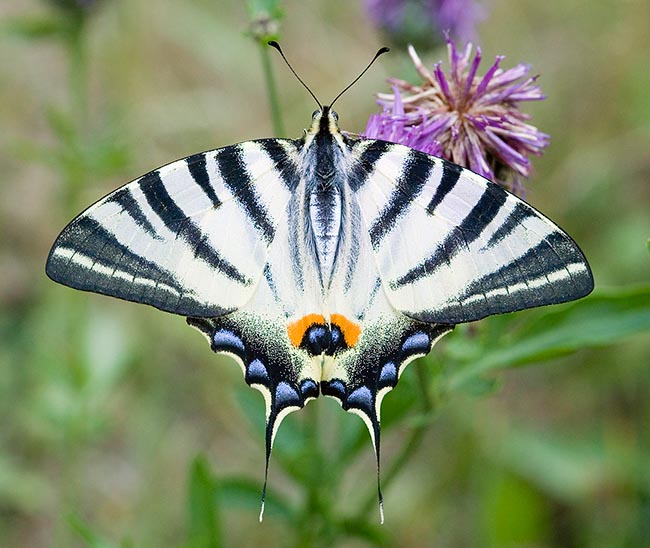 The scarce swallowtail is a bivoltine species in the warmest zones of its range, whilst is traditionally monovoltine in all the others.

It lays very small, pale greenish, eggs on the lower face of the leaves of fruit trees, of the blackthorns but also on other shrubby essences.

As usually happens in all butterflies, the lad eggs after a few days change the original colour into a darker and more camouflaged one. They have a quite reduced incubation seen that they usually hatch in less than ten days.

The caterpillars are very small and clearly reflect the reduced measures of the laid egg and are particularly little visible as their hyaline colour reflects that of the leaf where it is clinging.

The growth may take 40 to 50 days until reaching a size rarely exceeding the 4 cm of length.

The chrysalis, initially green then brown, is tied to the branches of the host plant with silk threads firmly anchored that guarantee it the survival during the winter season. The incubation of the summer generation is of about 4 weeks whilst the winter one goes from October to March of the following year.