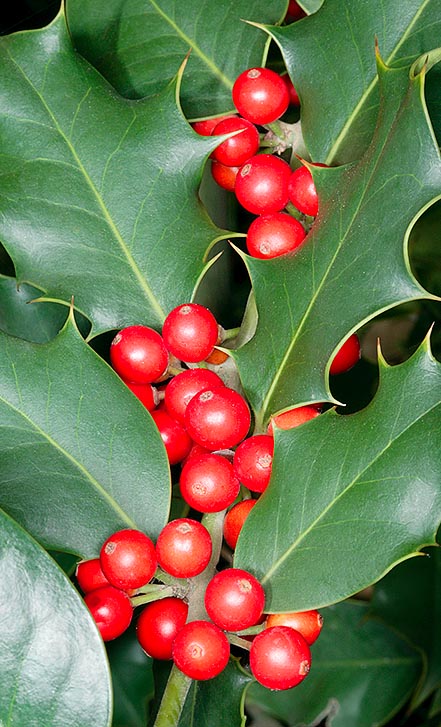 Due to the evergreen leaves and the merry red fruits, persistent in winter, the Ilex aquifolium is often deemed as a good luck tree © Giuseppe Mazza

The genus Ilex includes about 400-450 species (other authors, probably in a systematic disagreement, indicate up to 600). The last monograph of the genus, which considers also the hybrids and the ornamental cultivars, hosts 800 entities. The species of this genus are amply distributed in the Boreal hemisphere and also in the Austral one in the temperate and subtropical zones; they are vines, evergreen shrubs or small trees, also mostly evergreen, of the tropical and subtropical zones. Besides Ilex aquifolium, in Europe are present also Ilex còlchica (Turkey), diffused also in Caucasus and in Anatolia and Ilex perado of the Azores and in lesser extent in Madeira and Canaries.

The name of the genus Ilex goes back to the similarity of the leaves with those of the Holly oak (Quercus ilex) whilst the name of the species aquifolium comes from the Latin terms “acus”, needle and “acutus”, sharp, and from “folium, folia”, that is with sharp and spiny leaves.

The Common holly (Ilex aquifolium L. 1753), known also as Thorny laurel or European holly, is an evergreen woody species that may have a bushy-shrubby or low-arboreal shape; in the wild it can reach about the 10 (15) metres of height. However, it may exceed them if cultivated by pruning the branches along the stem reaching even the 22-24 metres.

The stem, straight and with patent branches, develops an ovate or pyramidal crown with an average diameter of 2-4 metres. The rooting system is very robust, with long gnarled and deep roots. The bark is thin, smooth or with tiny cracks, greenish when young and turning grey-pale with the time, finally scaly and darker grey in the old specimens.

It is a glabrous plant, but the buds, the young branches and the inflorescences, all pubescent. Alternate leaves, with marked polymorphism (the low ones are wavy and spiny, those of the upper part in the adult plants are unarmed), elliptic, wavy, evergreen and coriaceous (3-4 x 5-7 cm), with cartilaginous whitish border, dark green and very glossy on the upper page, pale green and opaque below, with short elongated and grooved petiole. The border is usually undulated and has robust spines (6-8 per side) which get unarmed in the secular specimens. In southern Italy was reported an australis variety by the English, but coming from an Italian family, botanist, Charles Carmichael Lacaita (1853-1933), with bigger leaves (8-9 x 10-12 cm) and less undulated. The common holly carries male and female flowers on different individuals. The blooming, little evident, takes place from April to May (June) and the pollination is mainly done by the bees. The flowers, fragrantly perfumed, have four sepals and four petals with a 6-8 mm diameter corolla, isolated or in groups of 2-3, axillary; the female ones, with white corolla, in the male ones it is white with red border. The male flowers have evident remnants of the gynoecium and the female ones of the androecium; in some instances the plants produces also hermaphroditic flowers.

The fruit ripens in autumn, it’s a sub-spherical drupe, umbilicate, with yellowish pulp, posionous, with pedicel shorter than their length (8-10 mm), red when ripe, containing (2) 3-5 monospermous, sub-trigonal or flat-convex seeds, with bony, very hard, endocarp, with 3-5 dorsal longitudinal ribs. The dissemination is done by the birds, especially blackbirds, thrushes and doves, which are greedy of the scarlet berries well in evidence between the dark green foliage of the holly. 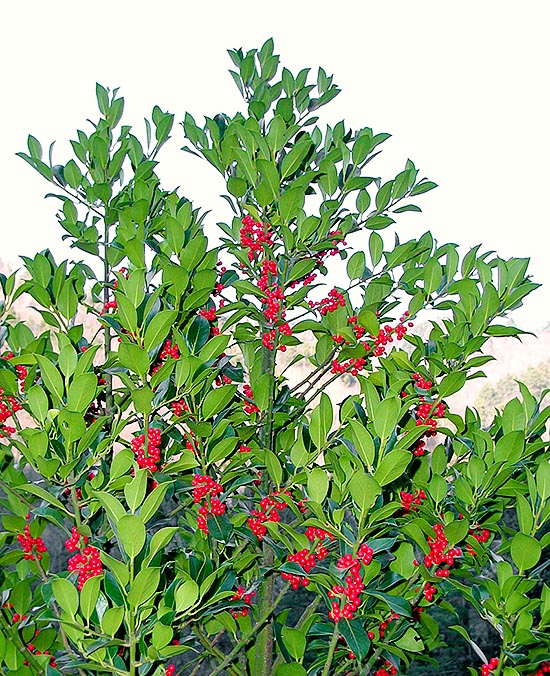 It may reach the height of 15 m, but even the 24 m if the low lateral branches are pruned. The alternate, glabrous, coriaceous, glossy and dark above, matt pale below, leaves show a marked polymorphism: wavy and spiny in the tree lower part and unarmed elliptic towards the crown © Giuseppe Mazza

The holly has a sub-Mediterranean/sub-Atlantic distribution that, from the southern and western Europe (up to Maghreb and to the Black Sea coasts) spreads northward up to Great Britain and to Norway, localizing especially in the sub-mountainous and mountainous areas. It is a very slow growing plant and is very long-lived; in favourable conditions it may reach three centuries of life developing trunks of more than 50 cm.

It is a mesophilic plant growing mainly from the plain up to 1500 m of altitude, especially in the woods of beech and of beech-fir, as well as in the thick chestnut and oak woods; it loves grounds with medium-fine texture, with neutral or slightly acidic pH, cool and humid, on average rich in nutrients and with a good percentage of humus, and shuns the calcareous, compact and water logged substrata; it is a species having an average-low exigency of light (sciaphilous).

Even if the holly is a sclerophyllous evergreen, it is not however a typical plant of the Mediterranean vegetation where it appears only occasionally, but it must be placed in the laurophyllous ones, typical of the Oceanic climate. The holly is considered as a relict species, with a very reduced distribution if compared to that it had during the Tertiary Era; it also had and important role during the humid inter-glacial periods, when it was a typical component of the colchicum-Atlantic vegetation, including the whole Mediterranean Basin from East to West.

The wood is white-ivory (in the old specimens it’s brown at the centre), at times with greenish reflections; is heavy (780 and more kg/mc) of medium hardness, compact, of fine grain, well workable and colourable (it may substitute the ebony), elastic and resistant, valuable and highly sought; it is employed, after long drying, for fabricating tools, rifle butts, umbrella handles, whips, walking sticks, stakes and other objects, teapots handles, as well as carvings (chess) and woodworks; its branches for the Christmas decorations, so much so n many countries, where the holly is n process of rarefaction, it is inserted in the lists of the protected species. Once the common holly was considered as a sort of a vegetal charm and therefore was cultivated around the houses in order to protect them from the negativity. The intense green colour and the tenacity of its leaves represented the strength of the life and of the resurgence whilst the fruits, persistent all over the winter time, were seen as a concentration of the energy from the sun.

When the seizing of the birds with snare and mistletoe, now luckily unlawful, was widely diffused on mountains, hills and sometimes in the plains, the countrymen and their sons got (in July) a viscous, brown substance from the second bark of the holly (the green bark under the first outer bark), crushing it in a mortar or by boiling, which was carried in the cellar and was left to ferment for 15-20 days. It was then washed with a lot of water to eliminate the fibrous-woody parts and then was conserved in closed pots, anointed with oil. 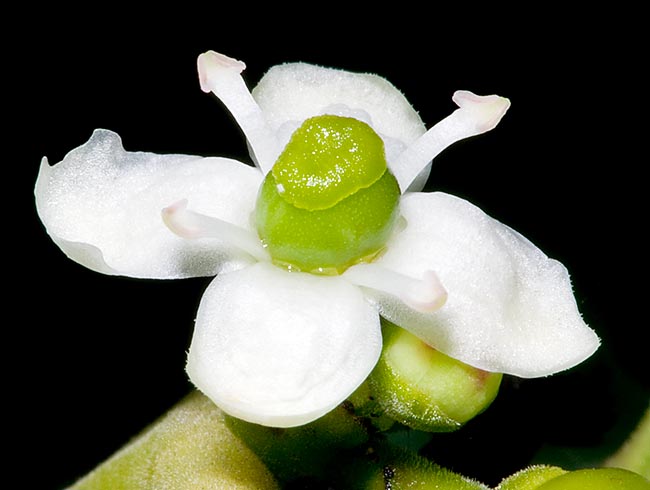 Dioecious, has male and female flowers on different plants. Here a white corolla flower of the fair sex, with typical remnants of the androecium. The male ones, with red edged petals show the remnants of the gynoecium and also hermaphroditic flowers do exist. The plants have medicinal vitues, the fruits violent purgative properties © Mazza

The branches were collected by the chimney-sweeps who tied them at the end of long wooden sticks of willow, thus getting appropriate and light tools suitable for their work.

The propagation of the holly is usually done by vegetative way (grafting, layering and cuttings) as the seed s born with difficulty due to the physiological dormancy and to embryo immaturity.

The holly can be used for creating impenetrable hedges or paired (male and female specimen to guarantee the fecundation and the production of the scarlet berries) in the parks and the gardens as excellent ornamental species.

Among the various ornamental species, we recall the Ilex cornuta of Asian origin, the Ilex macrocarpa, native to southern China, caducous, producing black fruits; the Ilex verticillata of south-eastern USA, also deciduous, and then cultivars with leaves streaked with white, yellow or purple, speckled with silver, edged with yellow, etc.

We recall here a few of them, such as the Ilex aquifolium ‘Pyramidals fructo-luteus’, the ‘Argenteo marginata pendula’, ‘Ferox argentea’, ‘Angustifolia’, ‘Ovata aurea’, etc. Besides other species of the genus Ilex introduced for ornamental purposes such as Ilex integra and Ilex cornuta (Japan), Ilex dipyrena (Himalaya), Ilex leucocarpa and Ilex opaca (USA), etc.

They make beautiful compact and impenetrable hedges because the holly bears well the pruning and is fairly resistant to diseases (at times, the leaves are damaged by the fly Phytomyza aquifolii whose larvae dig tunnels into the chlorophyllic parenchyma).

The bees often visit the holly flowers from which they get also wax for their hives thus favouring the fecundation and consequently the fructification of the female specimens. 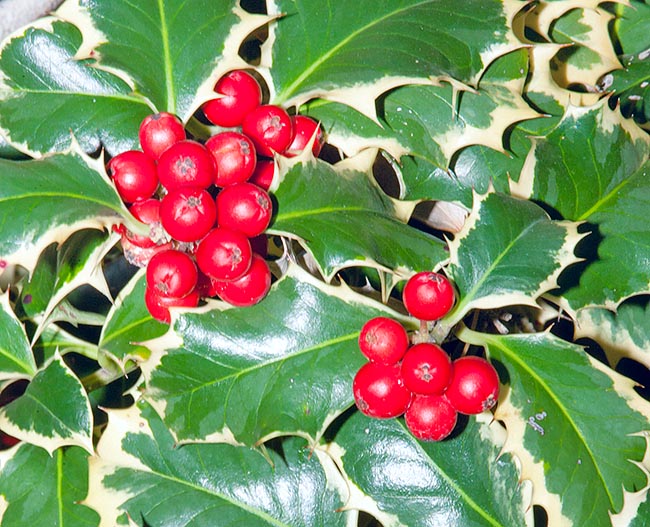 There are ornamental forms edged of yellow and with various streaks, purple, yellow, white and silver © G. Mazza

Amongst the medicinal species of the genus, in the origin countries, is cultivated the Ilex paraguariensis, known under the common names of Yerba mate or Mate, also known as Paraguay tea or Jesuits’ tea, a small tree or shrub of South America (Brazil, Argentina, Paraguay), furnishing the leaves suitable for preparing a tea bearing the same name, rich of caffeine, with theobromine, tannins, chlorogenic acid, triterpenes and essential oil.

The bark of the holly contains the bitter principle ilicin, present also in the leaves but in lower percentage, along with the colouring substance ilexanthin, silicic, ursolic and caffetannic acids, dextrose, gums and waxes, besides the alkaloid rutin and the nitrile menisdaurin, chlorogenic acid, chinic acid, quercitin, kaempferol, tannins, etc.

The fruits have violent purgative properties and cause serious neuro-vegetative alterations with nausea, vomiting, gastrointestinal pain with diarrhoea, convulsions.

The leaves have anti-inflammatory, antiarthritis, antipyretic, tonic and diuretic properties.

In many countries where the holly grows spontaneous, it is surrounded by legends, and this dates back to some millennia and to the populations who respected and were afraid of this plant. During the Saturnalia, which occurred from December 17th to 23rd (period fixed in imperial times by Domitian), the old Romans carried sprigs of holly as talismans bearers of long life and of prosperity to the newlyweds as a token of good wishes.