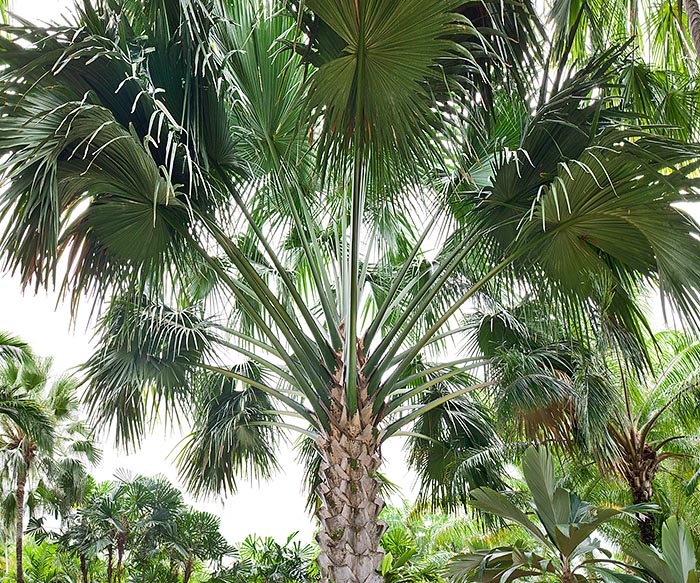 The species is native to the semi-deciduous forests of Burma, south-western India, Sri Lanka and Thailand where it grows up to about 600 m of altitude.

The name of the genus comes from the Greek “coryphe” = top, point, with probable reference to the huge terminal inflorescence; the name of the species is the combination of the Latin terms “umbraculum” = shady place and “fero” = to carry, to offer, with possible reference to its enormous leaves.

The Corypha umbraculifera L. (1753) is a slow-growing solitary species, monoecious, monocarpic (flowers only once then dies), with a solitary stem, imposing, up to about 25 m tall stem with a diameter of 70-90 cm, covered in the young plants by the remnants of the petioles of the fallen leaves persisting for many years. The leaves, on robust, up to 4 m long petioles with the borders slightly indented, are numerous, costapalmate, up to 5 m and more broad, divided in 80-110 rigid segments of intense green colour, united at the base for about one half of their length.

The inflorescence is terminal, erect, pyramidal, ramified, 5-6 m long, with a showy mass of tiny cream-coloured hermaphrodite flowers; the flowering takes place when the plant has reaches an age between the 30 and 70 years, during which the palm has stored in the stem a great quantity of starch that transforms in sugars serving to produce the enormous inflorescence. 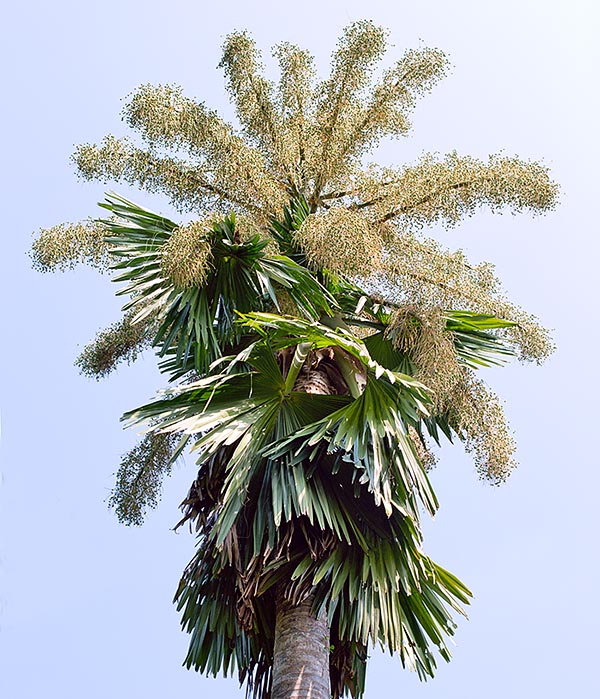 It's a monocarpic species. Here a dying specimen with forming fruits © Giuseppe Mazza

The fruits, which take about one year for ripening, are globose, of about 4 cm of diameter, of green colour tending to brown, containing one seed only; once the ripening of the fruits is ended, the plant, as previously mentioned, dies.

It reproduces by seed in sandy loam rich of organic substance at the temperature of 22-24 °C, utilizing fairly deep containers, with germination times going up to about 8 months.

Species of the greatest landscape value, but utilizable, due to the size of the leaves and of the inflorescence exceeding those of any other palm, only in vast parks and gardens and only for the tropical and humid subtropical climate zones, as it does not stand temperatures close to 0 °C if not for a very short period.

It requires an exposition in full sun and is not particular about the soil, provided the same is draining.

Locally, the leaves are utilized as walls and as roofing of huts and makeshift shelters and the fibres gotten from the petioles and the leaves serve for making cordages, headgears, baskets, umbrellas and other objects of common use.

In the past, the starch obtained from the stem has been also an important source of food for the local populations, whilst the leaves were employed, due to their durability and resistance to the tropical climate, as writing material for the holy texts, cut when still closed and prepared with a particular procedure before being utilized in about 90 cm long and 8 cm broad stripes.

Finally, the seeds, particularly hard and white, were used in lieu of ivory for fabricating buttons, prayer beads and small sculptures after having been cleaned up and polished.