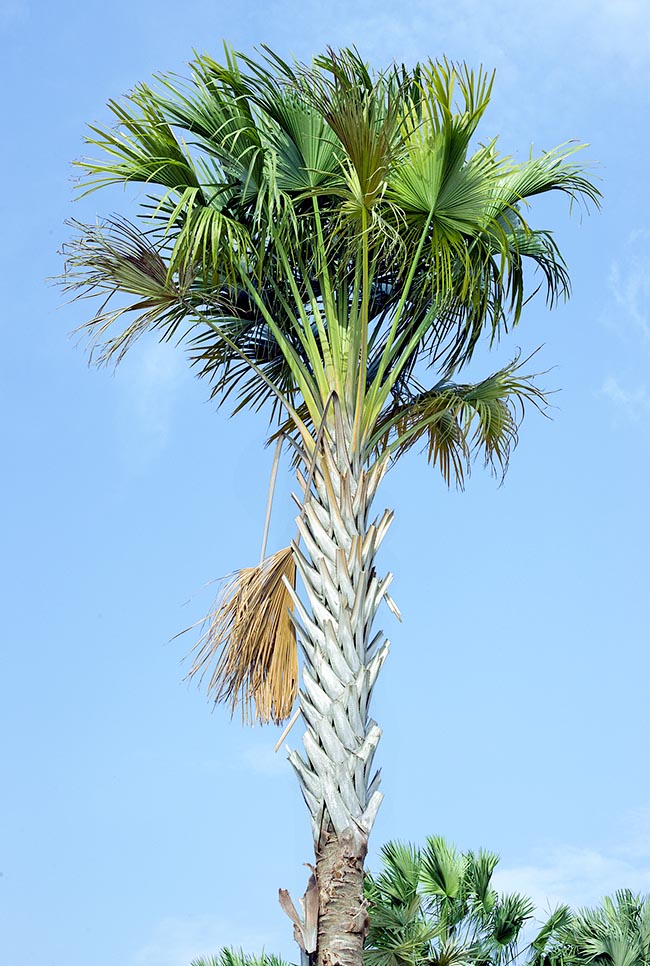 The plant is native to Andaman Island, Australia (Northern Territory and Queensland), Borneo, Cambodia, India, Indonesia, Laos, Myanmar, Malaysia, Papua New Guinea, Philippines, Sulawesi, Thailand and Vietnam, where it grows in the savannahs and the monsoon forests from the sea level up to about 500 m of altitude.

The name of the genus comes from the Greek “coryphe” = crown, point, with probable reference to the great terminal inflorescence; the derivation of the name of the species has not been clarified by the author, but in any case is referring to the local name, “lontar utan”, reported by Rumphius (ca. 1627-1702) in his ‘Herbarium amboinense’.

The Corypha utan Lam. (1786) is a solitary plant, monoecious, monocarpic (bearing fruit only one time during its existence), with a 25 m stem and a diameter of about 60 cm, of greyish colour, covered, close to the crown, by the residuals of the petioles spirally placed, whilst the oldest part of the stem is devoid, and only the traces in relief of their junction do remain, spaced of about 10 cm.

The leaves are costapalmate, of bright green colour, about 2-4 m broad and divided in several segments, long, at the centre, up to 1,6 m, initially rigid, then pendulous, united at the base for about 2/3, or less, of their length.

The petioles are 2,5-4 m long, of green colour, greyish at the base, with the margins armed by robust, curved, thorns, long even 2,5 cm.

The inflorescence, on a short peduncle, is terminal, pyramidal, much ramified, thick, 4-8 m tall and 5,6 m broad at the base, carrying some millions of cream white hermaphrodite flowers. The blossoming takes place when the plant has reached an age between the 40 and 60 years, during which the palm has accumulated in the stem a huge quantity of starch which transforms in sugars serving for producing the enormous inflorescence. The fruits are globular, of 3 cm of diameter, yellowish brown, containing one seed only; once the ripening of the fruits is completed, as said before, the plant passes away.

It reproduces by seed, utilizing 15-20 cm deep pots; the seed germinates in about 4 months. Showy plant due to the dimensions of the crown, even more at the blossoming time; it is suitable for tropical and subtropical climates in full sun; adult plants may bear, even if with serious damages to the leaves, temperatures around the -2 °C for a very short time, but cannot stand the long periods of rather low temperatures which occur in the warm temperate climates of Mediterranean type.

Its usage as ornamental plant is unavoidably very limited; in fact, it needs vast spaces not only for its dimensions and for being able to fully appreciate it, but also for the problems related to its “disposal” after the flowering. Very diffused locally, its leaves are utilized as covers and as walls of huts and makeshift shelters; the fibres gotten from the petioles and leaves serve for making cordages, headgears, and other objects of common usage.

The vegetative apex (the palmito) is at times consumed as vegetable, from the lymph collected by incising the base of the inflorescence they get sugar, and, fermented, an alcoholic beverage; in famine times they extract starch from the stem.