The species is native to Ecuador where is present in the misty forests of the Cordilleras de Cutucú and Cóndor, between the 1000 and 2000 m of altitude.

The name of the genus probably comes from the Greek “κωρυτος” (corytos) = leather bag and “πλεκτος” (plectos) = folded, with reference to the lobes of the calyx; the specific name refers to the place of origin of the type species , the Cordillera of Cutucú in Ecuador. 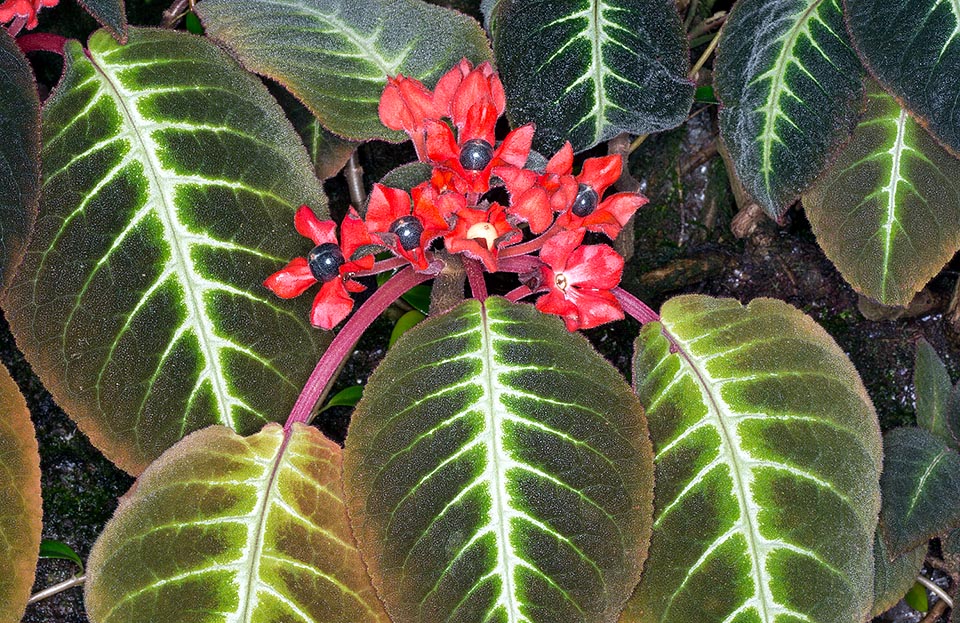 Rare in nature, in the misty forests of the Ecuadorian Cordilleras of Cutucú and Cóndor, Corytoplectus cutucuensis is a terrestrial evergreen herbaceous about 60 cm tall © Giuseppe Mazza

The Corytoplectus cutucuensis Wiehler (1995) is an evergreen terrestrial herbaceous species, up to about 60 cm tall, with fleshy stems and leaves, on a purple red pubescent petiole, simple, opposite, decussate, ovate with acute apex and crenate margin, of dark green colour and velvety to the touch with white-greenish veins above, wholly purple below, about 10 cm long. Erect umbelliform terminal inflorescences, compact, with numerous flowers with free lobes of the calyx, about 1,2 cm long, accrescent in fruit and persistent for a long time, of bright red colour, pubescent, and tubular corolla, about 2 cm long, with 5 reddish orange petals, pubescent, short lasting. The fruits are globose berries, of about 1 cm of diameter, of bluish black colour with metalli reflections containing numerous tiny black seeds.

It reproduces by cutting and easily by seed, put superficially in a luminous location, but not at direct sun, utilizing an organic substratum with addition of siliceous sand or agriperlite per a 30%, maintained constantly humid, but without stagnations. The germination times are short, 2 weeks about, with the first blooming, in the best cultivation conditions, starting from eight/nine months. 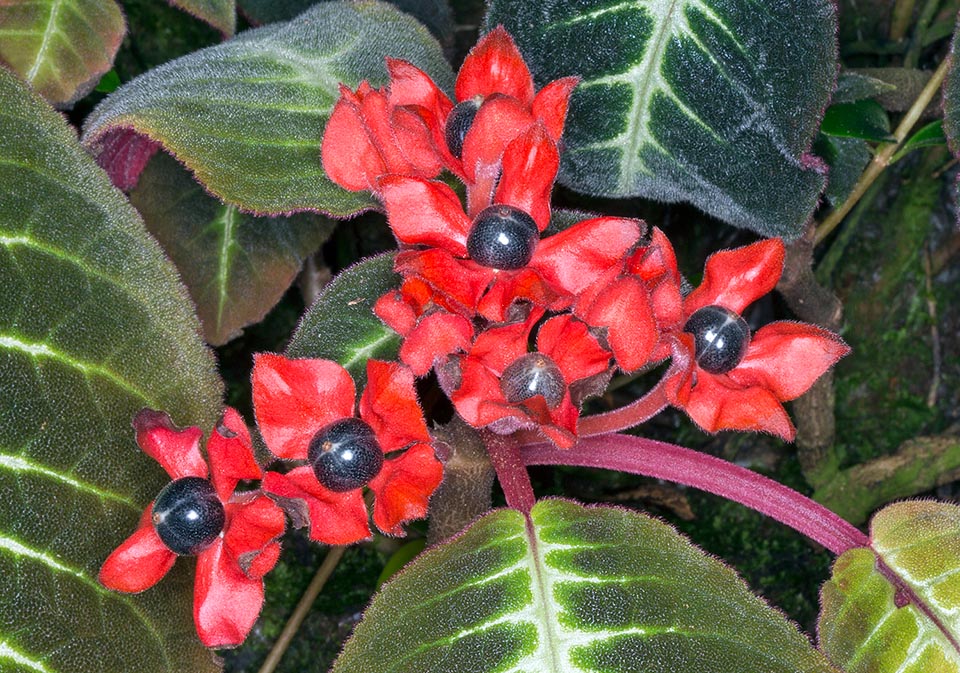 Rare in nature as well as in cultivation, but of great ornamental effect, due to the leaves and the persistent calyces and the pearly fruits, besides the utilization in open shady places in the tropical and humid subtropical zones, is an excellent choice as plant for the decoration of inner spaces. It needs a slightly shady environment, medium-high temperatures, with lowest winter night temperatures not under the 16 °C, and humidity above the 60%. In case of unsufficient humidity, in addition to nebulizations with non-calcareous water at ambient temperature, it may be placed in pot on a wide saucer filled up of expanded clay or rubble with a layer of water, not in direct contact with the bottom of the pot, in order to create a humid microenvironment around the plant. It requires a very porous and draining substratum that may be formed by coarse peat with 30% of siliceous sand or agriperlite. Due to its rather slow growth it adapts also to be cultivated in terrarium.

Owing to the destruction of its habitat the species is reported in the red list of the IUCN (International Union for Conservation of Nature) among the species at very high risk of extinction in the forthcoming future (“Endangered”).