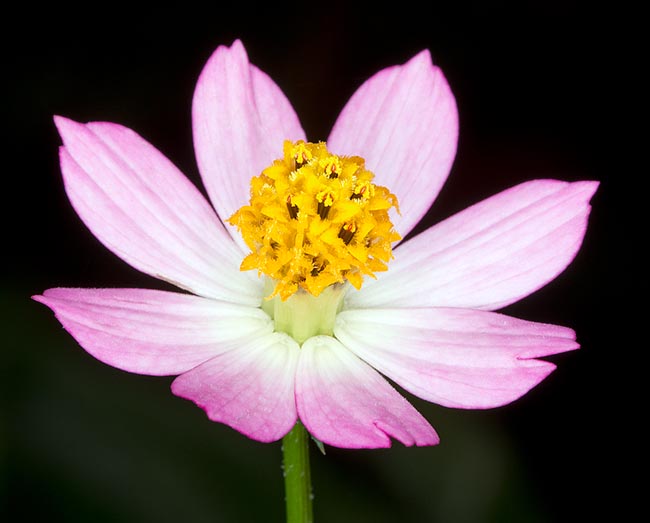 The name of the genus is the Greek substantive “κόσμος” (kosmos) = ornament; the specific name is the Latin adjective “caudatus, a, um” = caudate, having a tail.

Capitula, the typical inflorescences of the Asteraceae, on a 5-28 cm long peduncle, usually solitary, of about 4 cm of diameter, formed by numerous sessile flowers spirally arranged on a roundish base, the receptacle, surrounded by a campanulate involucre, of 0,5-1,5 cm of diameter, formed by a series of oblong-lanceolate bracts 0,7-1 cm long. The flowers of the outer ring, called ray florets, usually 8, have oblanceolate corolla with tritoothed apex, 1-1,8 cm long, of white, pink or purple colour; the ray florets are sterile and have the function of attracting the attention of the pollinating insects like the petals of a single flower. The flowers inside the ring, called disk florets, are bisexual, have imbutiform corolla with tube of 0,8-1 cm of length and 5 lobes, about 2 mm long, of yellow colour.

The fruits are linear achenes (or, better, cypselae) with quadrangular section, blackish, 1-3,5 cm long, of which 1-1,5 cm formed by the beak (pointed prologation) of brown colour, with no pappus or formed by 2-3 thin diverging and retroflexed scales, 3-5 mm long, that adhere to the skin of the animals that favour their dispersion. In many tropical and subtropical countries, where the species has been introduced, the same has escaped cultivation becoming invasive.

It easily propagates by seed in spring in fertile loam, draining, maintained humid at the temperature of 20-22 °C, with the first blooming after about 2 months from the germination. 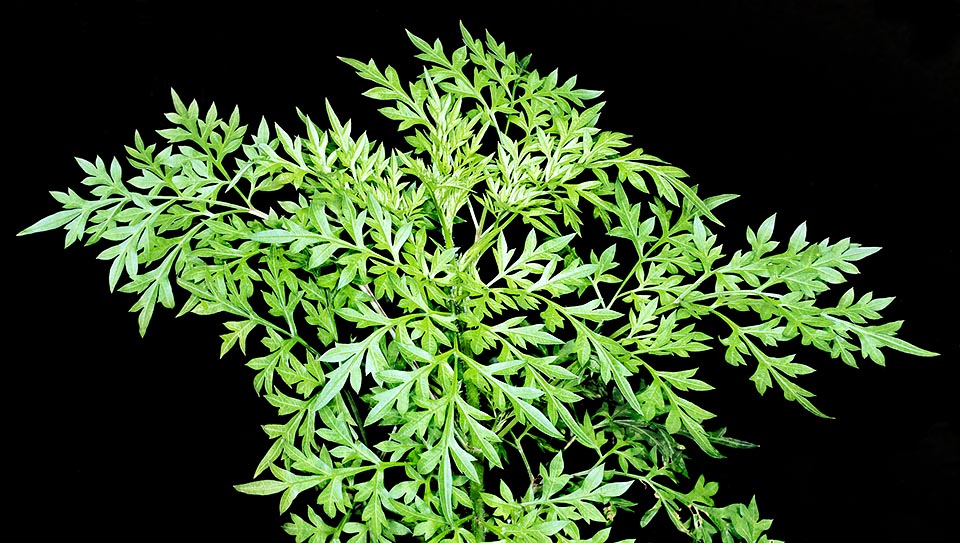 The leaves, rich of minerals, especially calcium and vitamins B1, B2 and C, are very appreciated for their particular taste and eaten raw in salads or added to foods as flavour; they have also become part of the popular medicine as remedies for various pathologies. Bioactive substances with high antioxidant activity © Giuseppe Mazza

Ornamental species easy to cultivate and of fast growth that though being native to tropical and subtropical regions, is cultivable, being annual, in an ample variety of climates, from the warm temperate to the continental one, where is utilized, along with its varieties, in gardens in group or for borders, also mixed. It requires full sun and draining soils, preferably fertile, with moderate waterings in the climates with dry summers; it well adapts to cultivation in pot.

In some countries of South-East Asia, where it has naturalized, in particular in Malaysia, its leaves, rich of minerals, among which the calcium occupies a prominent position, and vitamins B1, B2 and C, are much appreciated for their particular taste and consumed raw in salads or added to other foods for flavouring them; moreover, they have become part of their popular medicine as remedies for various pathologies. Laboratory studies have evidenced the presence of numerous bioactive compounds with high antioxidant activity.