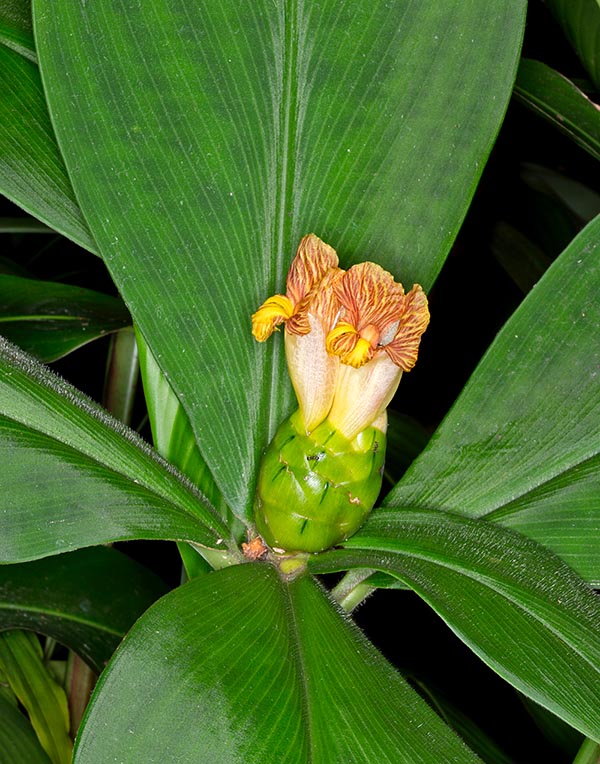 The species is native to Costa Rica, Honduras and Nicaragua, where it lives in the humid forests from the sea level up to about 1000 m of altitude.

The name of the genus was given by Linnaeus in honour of Dioscorides who had described a plant, deemed similar, with the name of Kostos; the species is dedicated to the Master of Ceremonies and Minister of the kingdom of Hannover, Carl Ernst von Malortie (1804-1887).

The Costus malortieanus H.Wendl. (1863) is an evergreen perennial rhizomatous herbaceous species with stems covered by short morbid down, 0,3-1,2 m tall, with green tubular sheath, ciliate at the apex.

The leaves, villous like the stems and spirally arranged, are simple, entire, obovate with pointed apex, 20-30 cm long and 12-22 cm broad, coriaceous, intense green with slightly darker variegations parallel to the secondary nervations on the upper page, glaucous green below.

The flower presents a small campanulate calyx with three unequal lobes with obtuse apex, 3,5-5 cm long, an oblong-linear fertile stamen curved at the apex, fleshy, white with red apex, and obovate labellum, 4-6 cm long and 4-5 cm broad, formed by the merged fertile stamina, of yellow colour streaked of red, with bent central lobe; the pollinators are hummingbirds and bees belonging to the tribe of the Euglossini Latreille, 1802.

The fruits are white ovoid capsules, about 1,4 cm long and of 1 cm of diameter, containing numerous black seeds with white aril. It reproduces by seed, in loam rich of humus with addition of sand or perlite per a 30%, kept humid and in shaded position, at the temperature of 22-26 °C, and, easily, by division in spring. 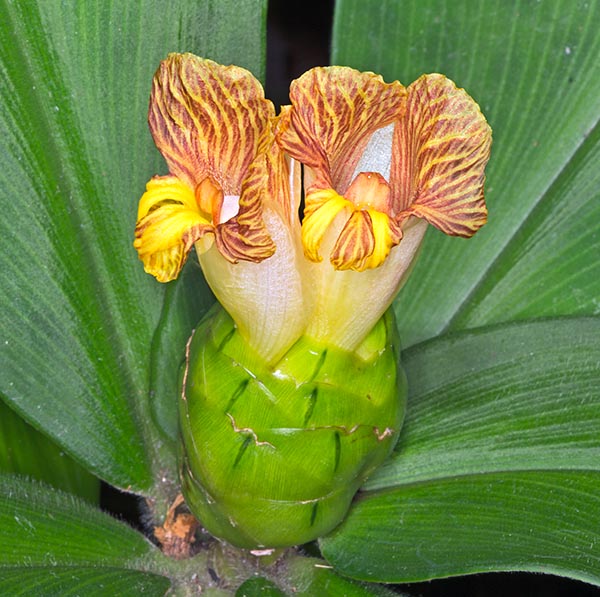 The 3,5-5 cm long flowers are pollinated by hummingbirds and bees of the Euglossini tribe © G. Mazza

It is one of the easiest species to cultivate of the genus which would deserve a greater diffusion due to its velvety foliage, particularly ornamental. It bears very luminous positions, even in full sun, but in such situation usually the variegation disappears and the green becomes paler, therefore a semi-shaded positioning is to be preferred.

It is cultivable in the tropical and humid subtropical climate zones, as it does not stand temperatures close to 0 °C except for a very short time, on soils rich of organic substance, draining, kept constantly humid, but without stagnations. It is utilizable, thanks to its reduced size, as edging, in mass, soil cover, but also isolated specimen.

It well adapts to the cultivation in pot for interiors decoration, even if little luminous, with temperatures not less than 15 °C and humidity which can be increased placing the pot on a tray with gravel or other inert kept constantly humid and doing, in presence of air particularly dry, nebulisations with non-calcareous water in order to avoid anaesthetic spots on the leaves. The watering must be regular and abundant in summer, more spaced in winter, but without letting the loam to dry up completely.