The species is native to Costa Rica where it lives in the underwood of the rainforest on rocky slopes near water streams, from the sea level up to about 400 m of altitude.

The generic name was given by Linnaeus in honour of Dioscorides who had described a plant, deemed similar, with the name of “κόστος” (kóstos); the specific Latin name refers to the peninsula of Osa in Costa Rica where the species has been found for the first time.

The Costus osae Maas & H.Maas (1997) is an evergreen, perennial rhizomatous herbaceous species, with erect stems up to about 1 m tall and of 1 cm of diameter. 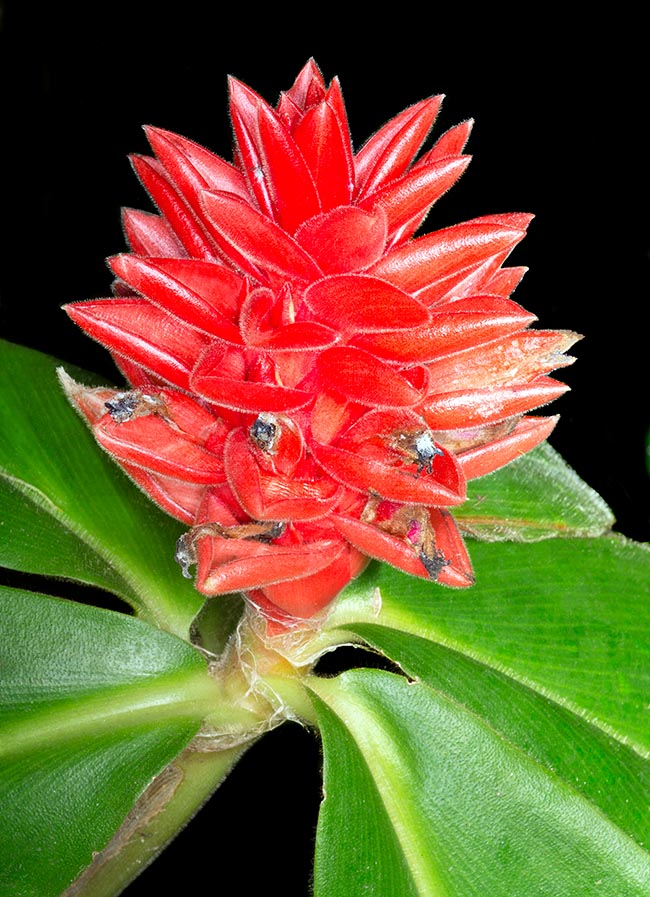 The Costus osae is an evergreen, rhizomatous herbaceous species of Costa Rica where it grows in the rainforest on rocky slopes. Erect stems about 1 m tall. Under risk of extinction in nature, has an undoubtful horticultural value © Giuseppe Mazza

The leaves are simple, alternate and spirally arranged, obovate-elliptic with acuminate apex and entire margin, 13-26 cm long and 6-15 cm broad, coriaceous, of glossy intense green colour above, paler and opaque below, and covered on both sides by thin hair.

Sessile terminal inflorescence from ovoid to cylindrical, about 7 cm long and of 5 cm of diameter, formed by ovate imbricate bracts with acute apex, ascending, concave, slightly pubescent, of red colour, 2,5-4,5 cm long, inside which are born sessile hermaphrodite flowers, tubular, about 5 cm long, of intense pink to red colour. The bracteoles at the base of the flowers, about 2,5 cm long, are bi-keeled, characteristic it shares with the Costus ricus Maas & H.Maas (1997), native to the same area, whilst all other species of the genus have bracteole with only one keel. The fruit is a red globose capsule containing black and glossy seeds.

It reproduces by seed in particularly draining loam rich of organic substance maintained constantly humid, but without stagnations, at the temperature of 24-26 °C, and easily by division.

Species that in a few years after its discovery has aroused an always increasing interest due to its characteristics that render it adapt as soil cover, for flowerbeds and borders exclusively in the gardens of the tropical and subtropical climate zones, as it does not bear temperatures close to 0 °C.

It requires a slightly shaded position and draining soils, rich of organic substance, maintained constantly humid, but without stagnations. Cultivable also in pot, to be sheltered in protected environment where the climate does not allow the permanence in open air during the winter months, utilizing an organic loam with addition of siliceous sand or agri-perlite per a 30 % to improve the drainage, with lowest temperatures not under the 16 °C; if the environment is too dry are to be done nebulizations with non calcareous water at room temperature. Regular and abundant watering during the vegetative period, more spaced in winter, in way to allow the substratum to partially dry up.

Due to the limited number of individuals and the progressive loss of its habitat it has been inserted in the red list of the IUCN (International Union for the Conservation of Nature) as “vulnerable” (species under risk of extinction).