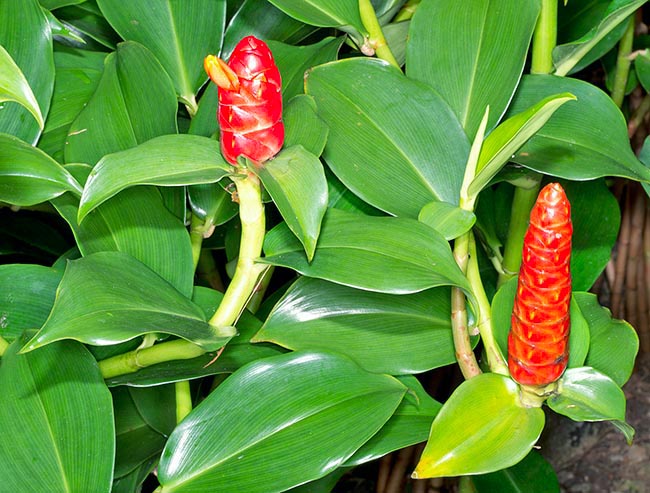 The species is native to Colombia, Costa Rica, Nicaragua and Panama, where it grows in the open forests along the coast or on the beaches in full sun.

The name of the genus was given by Linnaeus as homage to Dioscorides who had described a plant, deemed similar, with the name of Kostos; the species is honoured to the American botanist Robert Everard Woodson (1904-1963), curator of the herbarium of the Missouri Botanical Garden.

The Costus woodsonii Maas (1972) is an evergreen, perennial rhizomatous herbaceous species with slightly spiralled stems, 1-1,8 m tall, even if in cultivation they keep lower.

The leaves are alternate and spirally arranged, simple, entire, and ovate to elliptic with pointed apex, 8-25 cm long and 4-10 cm broad, coriaceous, of glossy intense green colour above, paler below. The inflorescence, terminal, is an ovoid to cylindrical spike, 5-15 cm long and of 2-3 cm of diameter, formed by ovate imbricate bracts of glossy red colour inside which spring up hermaphroditic flowers with tubular orange to reddish orange corolla, about 3 cm long, labellum, formed by the merged sterile stamina, yellow, oblong, 1,8-3 cm long, and a yellow stamen, 3 cm long; the flowers, one, rarely two, each day, are pollinated by the hummingbirds. 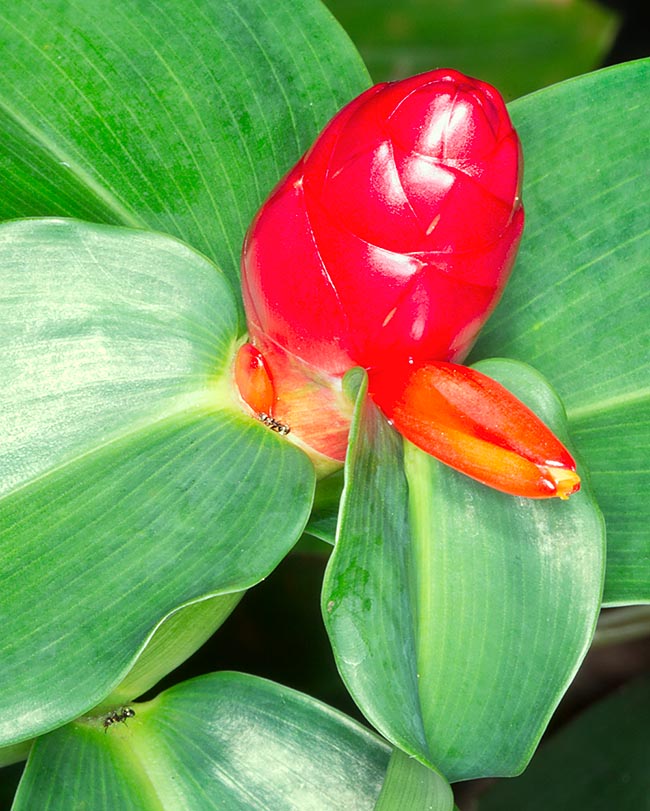 The ants, attracted by the nectar, protect it from the flies of the genus Euxesta © Giuseppe Mazza

The bracts produce nectar which attracts the ants that hinder the ovo-deposition of flies belonging to the genus Euxesta Loew (1868) whose larvae would destroy the flowers, by drastically reducing their fructification, as evidenced by a study done by Douglas W. Schemske (1980); the production of nectar is limited to the short period of time when the flowers are exposed to the risk.

The fruits are white ellipsoid capsules, about 1 cm long, containing black seeds with white flesh aril that favours their dispersion by means of the birds. It reproduces by seed and easily by stem cutting and through the young plants occasionally produced at the base of the old inflorescences.

It is a vigorous species expanding rapidly through the rhizomes and does not need particular cares, cultivable in tropical climate zones, where it is in practically continuous flowering, in the subtropical and, marginally, in the warm temperate ones, where it can resist, at the level of rhizome, at temperatures just under the 0 °C, if well mulched.

It requires full sun or partial shade and is not particular about the soils, even if it prefers those rich of organic substance and well drained, kept constantly humid, but without stagnations; due to its compact vegetation can be used in borders, in mass or as soil cover of particular ornamental effect. Thanks to its good resistance to the marine aerosols, it can be employed in gardens close to the sea.

It is cultivable also in pot for the decoration of patios and balconies, utilizing an organic substratum with addition of siliceous sand or perlite for a 30% in order to improve the drainage, or for being sheltered in spacious and luminous ambients where the climate does not allow the permanence in open air during the winter months, with minimum temperatures over the 14 °C, regular and abundant watering in summer, more spaced in winter, but without allowing the loam to dry up completely, and fertilizations, during the vegetative period, with hydro-soluble balanced products with microelements. The cut inflorescences, showy and long-lasting, are utilized in the floral compositions.