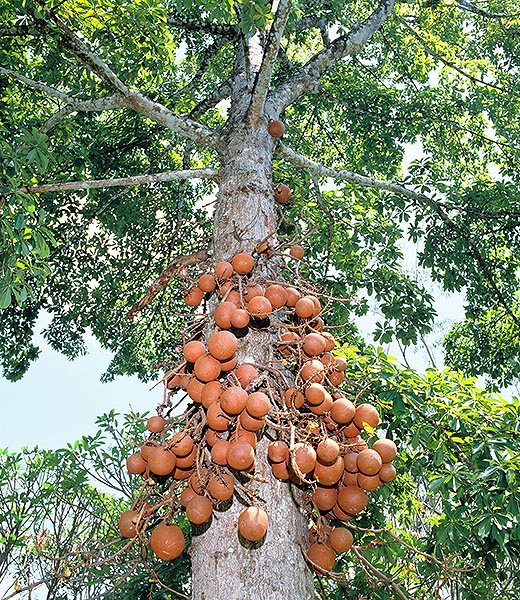 This plant is native to Central and tropical Southern America (Brazil, Colombia, Costa Rica, Ecuador, French Guyana, Guyana, Panama, Peru, Surinam and Venezuela), where it grows in the thick humid forests, often along the rivers, at low altitude.

The name of the genus is the native one of the French Guyana, “couroupitoutoumou”.

The name of the species refers to its origin country.

The Couroupita guianensis Aubl. (1775) is an evergreen or semi-evergreen (it may lose the leaves several times during the year, but they are replaced in a few days), tree, which may be 30 m tall, with a cylindrical trunk which can exceed the 70 cm of diameter, and a brownish grey bark slightly fissured lengthwise.

The leaves, grouped at the tip of the branches, are alternate, ovate or lanceolate, with entire or slightly toothed margin, 10-20 cm long and 4-10 cm broad, are of an intense green colour.

The flowers, strongly perfumed, of 8-12 cm of diameter, produced most of the year, are carried by woody, up to 2 m long, racemes, which generate on the trunk (cauliflory) or at the base of the main branches.

The corolla is formed by six fleshy, concave, roundish, petals, two of which are larger, of a colour going from orange to pink, internally red, often yellowish outside, with a white central disc, and several stamina divided in two groups, one fertile around the pistil, and one of sterile stamina, about 2 cm long, united in a sort of a hood over the pistil. 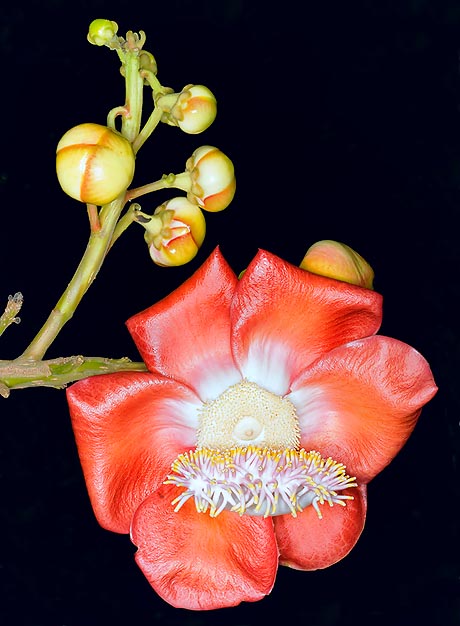 The fruits, which take about one year for ripening, are globular, 10-22 cm of diameter, woody, of brown colour, and contain some hundred tiny seeds immersed in a white pulp, of pleasant odour when the fruit is just ripe, but which, quickly, becomes bluish as soon as exposed to the open air and with a nauseating smell.

The pulp is edible and at times is locally consumed, but the odour discourages its alimentary utilization, but for the animals. It reproduces by seed which is to be planted when still fresh as it has a short germination time, or by suckers.

It is one of the oddest and most ornamental trees, the trunk of the adult specimens may be covered by flowers and fruits, present at the same time. The flowers last just one day, but are produced in sequence and in great quantity.

It is a tropical and marginally humid tropical climate species, it may bear exceptional drops in temperature down to even -1 °C for a quite short time.

Although it lives in nature on soils almost permanently humid, at times flooded, it adapts also to markedly seasonal climates as it can stand periods of dryness.

It is utilized, mainly as botanic curiosity, in parks and vast gardens with the cleverness of avoiding frequented sites due to the dangerousness of the heavy fruits which may fall down at any time.

All parts of the plant are utilized in the traditional medicine. The outer woody shell (exocarp) of the fruit is locally utilized as container, the upper part of the fruit comes off easily like a cover, and as ornament.

The tree, besides being sacred for the Amazonian natives, as become so also sacred by the Hindus and is planted in the temples dedicated to Shiva in India.