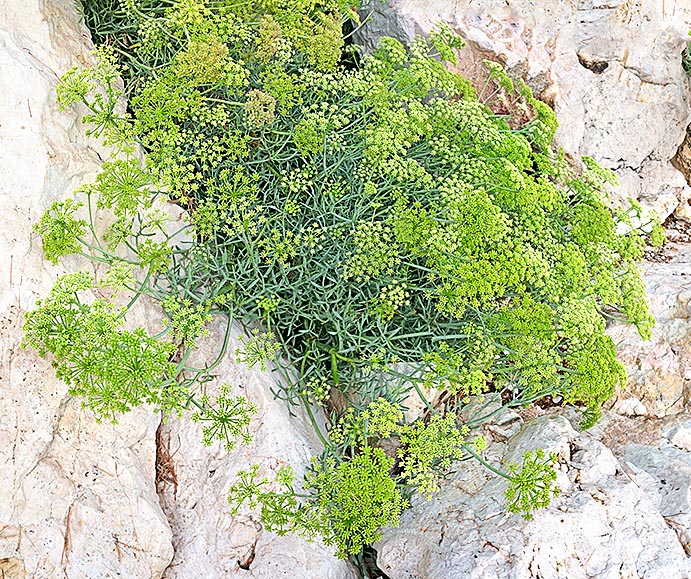 Only species of the genus Crithmum, the Crithmum maritimum grows among the rocks close to the sea where forms bushy cushions of more than 50 cm. The leaves are fleshy and edible, rich of vitamin C and medicinal virtues © Mazza

The name of the genus Crithmum comes from the Greek κριθη (krithe) = barley, due to the shape of the seeds similar to those of the barley whilst the name of the species maritimum = maritime in Latin refers to its habitat. κρηθμος and κρηθμον (krethmos and krethmon) are the Greek names with which the plant was called.

It is called sea fennel because of the habitat, the shape and the taste and, in Italian, also St. Peter’s grass probably because St. Peter is the patron of the fishermen and the plant lives in a marine habitat.

The other English names of the sea fennel, “samphire” or “rock samphire”, actually given also to other coastal plants, comes from the ‘500 term “sampere”, that is “St. Pierre”. To this plant is dedicated the Samphire Hoe Country Park, and English park near Dover, created with the land extracted during the excavations of the Channel Tunnel. The various Italian dialectal names are usually variants of the terms sea fennel, St. Peter, “spaccasassi”, “critamo” and, in Tuscany and Liguria, “Bacicci”, probably in reference to the Latin term “Batide”. Pliny, in fact, used the term “batis” for the Crithmum; “baticula”, “bacicchia” and alike are of late Roman and medieval use, especially in Provence, hence, probably, the diffusion in Liguria.

The Crithmum maritimum is native to the Mediterranean regions. Diffused along the coasts of the Mediterranean and of part of the Black Sea, we find it also on the Atlantic coasts of France, Spain, England and Ireland up to the Canary Islands. The presence in North America is of anthropic origin.

It preferably grows on the cliffs, on the reefs, the piers and gravel beaches. Halophilic plant, is one of the few species capable to survive in locations regularly exposed to the splashing of the waves or in soils impregnated with sea salt. This plant characterizes the typical coastal vegetal association rightly called Crithmetum. We rarely find it far away from the sea, but sporadically on old walls and on gravels also in the hinterland. The indiscriminate gathering has caused the rarefaction of the species in many highly athropized coastal regions. 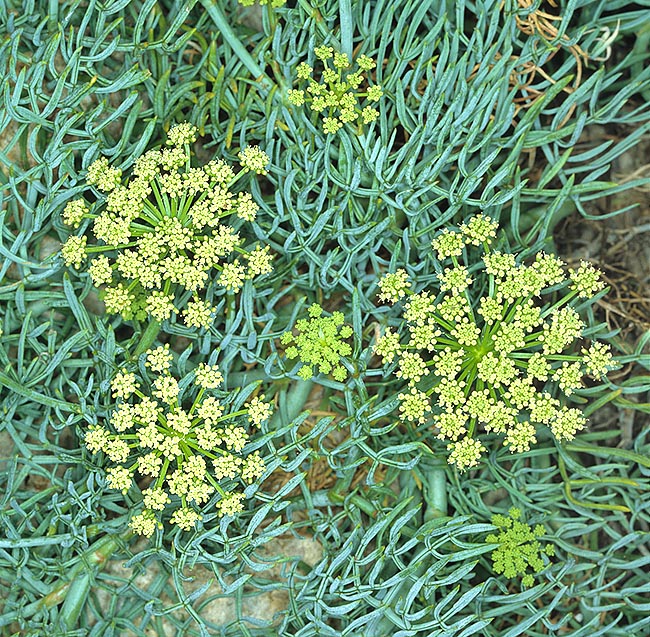 Besides to the salinity, the Crithmum maritimum is very resistant to the drought and is one of the few Mediterranean plants blooming in full summer.

Such resistance is due to the fact that the root penetrates very deep into the soil reaching the humid soil, as well as to the peculiar characteristics of the leaves. The leaves, very fleshy, hold in fact a high quantity of water and are covered by a waxy cuticle which prevents the excessive evaporation and also the subtraction of water by osmosis, due to the hygroscopic characteristics of the sea salt. Furthermore, the cuticle prevents the penetration of the sea salt. The presence of fleshy leaves and covered by waxy cuticle is typical also of the plant of the desertic climates.

Rhizomatous plant, with robust and zigzaggy ramified stems, grooved, often woody at the base, the sea fennel is able, in suitable habitats, to form bushy cushions of more than 50 cm of diameter.

The leaves are basal, waxy, compound, bi-tripinnatosect formed by 1-2 cm lanceolate pointed leaflets, fleshy, similar to those of a succulent plant, of glaucous-green colour with a long petiole having at the base a sheath wrapping the stem. The overall shape of the leaves reminds that of the antlers of the deer.

The flowers, present from July to September, are small, of 2-4 mm, with white or yellowish, more rarely pinkish, rounded petals, carried in umbels with 10-30 rays, in their turn subdivided in umbellets surrounded by bracts. The rhizomatous root is flesh and robust, with creeping development and can stretch up to five metres.

The fruits, oval, are formed by two achenes and are crossed by 10 longitudinal ribs. When ripe, in late summer, they get a purple colouration. The plant is hermaphroditic and the pollination is essentially entomogamous.

All plant is intensely aromatic with a mixed fennel and mint smell, of bitterish taste and slightly tangy. The sea fennel is utilized since the old times for medicinal purpose and as appreciated alimentary plant. 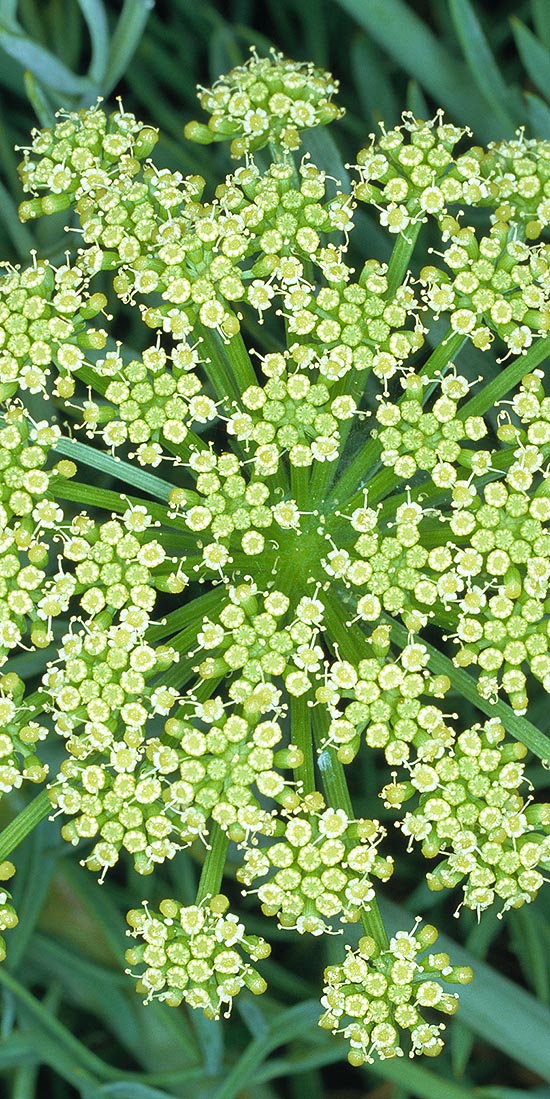 The 2-4 mm flowers, with white or yellowish, more rarely pink, petals, are carried by umbels with 10-30 rays, in their turn subdivided in umbelets surrounded by bracts © Giuseppe Mazza

The collection of the Crithmum was much diffused in the past centuries and Shakespeare in the Re Lear (act IV, scene VI) talks about the dangers the collectors exposed themselves climbing the step rocks “Halfway falls he who collects the St. Peter’s grass, awful job!”

The English botanist of the first mid of the ‘800, W.A. Bromfield relates that the owners did require a heavy tax for allowing the collecting of the sea fennel in their lands and the commercial exploitation in the past had reached such dimensions to cause a serious rarefaction of the plant in some regions. In the ‘800 the plants collected were carried to the London markets in barrels full of sea water.

Nowadays, the plant is protected in some regions, for instance in England where the collection is forbidden, and for the alimentary or herbalistic use recourse is done to the cultivation in orchards.

The spicy taste, slightly salted and the scent much similar to that of the fennel, make appreciated still now the fleshy leaves, in salads as well as in aromatic sauces, cooked in butter as embellishment of meat courses, fried or preserved in vinegar. Among the several available recipes, some of which dating back to late ‘500, we relate as examples: mixed salads, cream, risotto, soups, vegetable rustic pies, casseroles, pickles, sauces for seasoning.

The plant is rich of vitamin C and this renders it an excellent antiscorbutic. It is well known that in the past on the Mediterranean coasts, the seamen took onboard stocks of fresh sea fennel, or conserved in vinegar, as pleasant aliment and capable to prevent the scurvy. Pliny mentions the function against the gout and as laxative, Dioscorides reminds that “the roots, the seeds and the leaves, cooked in wine and drunk, are used for the urinary retention, the jaundice and cause menstruation”. It was also used against the bite of the snakes.

Also the modern popular medicine and the herbal medicine ascribe the Chritmum various therapeutic properties; it is used as vermifuge and for improving the functionality of the liver or for the urinary insufficiency, as eupeptic, choleretic and galactogogue, as depurative and against the meteorism.

For the medicinal use recourse is done to the fresh leaves as well as to the juice or to tinctures prepared in alcohol or in wine or to decoctions and essential oils.

As most part of the Apiacee also the Crithmum contains several essential oils, among which we remind the eugenol, the thymol, the carvacrol and the crithmene, isolated for the first time, rightly, from the Crithmum.