The term “crocodylus”, as we have seen for the other species of the same genus, comes from the ancient Greek and means “worm-shaped pebble”, whilst the lemma “acutus” comes from the Latin and means “pointed”, sharp”, “narrow”, with reference to the shape of the muzzle.

Various are the common names with which it is called in English, among which, American crocodile, Central American alligator, South American alligator and American saltwater crocodile, in Spanish they are: Cocodrilo Americano, Cocodrilo de Rio, Lagarto Amarillo, in French, Cocodrile d’Amérique, Caimán de Aguja, Llaman caimán and Crocodile à museau pointu, in Italian, Coccodrillo Americano. The CITES inserts this loricate into the appendix I, the IUCN defines its statu as vulnerable, that is, VU A1ac. Biologists estimate its population as of 10.000-20.000 individuals. Essentially, it would appear that for this loricate (the data in possession of the biologists are, however, not exhaustive), in Central-Southern America, in some areas, the population is stable, whilst in others, on the contrary, is in decline; in USA it looks like that there is taking place a phase of recovery and growth, since about a ten years up to now.

It is autochthonous to the southern USA and to Central-Southern America; in this last geographic area, the fragmentation of distribution is higher, and for this we find it in Mexico, Nicaragua, Trinidad island, Martinique, Jamaica, Isla Margarita off Venezuela, Venezuela, Belize, Cayman Islands (in the past, nowadays extinct), Haiti, Guatemala, El Salvador, Panama, Costa Rica, Colombia, Dominican Republic, Cuba, Ecuador, Hispaniola (the second Antilles island as per size), Honduras, Peru. In USA, to be more precise, t is localized in the southern part of Florida.

Its habitats are quite various, as it can adapt well to fresh water as well as to the salt one. It is found in coastal habitats, marine estuaries included, coastal lagoons and mangrove areas; it frequents also lotic and lentic freshwaters, such as rivers, streams, lakes (in this last instance, also saltwater lakes).

In the Dominican Republic, it lives in the Enriquillo Lake, which, besides being the most important reserve of natural water of this republic, forms along with the Lake Enriquillo National Park, and the Cabritos Island, the Biosphere Natural Reserve of Jaragua-Bahoruco-Enriquillo, a true and real natural sanctuary. They can live in this hyper-saline lake as they osmoregulate themselves. The most uncommon location where the biologists have observed this crocodile stands in the canals where cold salty water flows, utilized as cooling water for the “Turkey Point Nuclear Generating Station” nuclear reactor, at Homestead, Florida.

This species of crocodile builds also deep holes inside which it places with water, for estivating over the dry season. It can undertake even rather long journeys, over land, looking for a suitable biotope where to install.

The diet mainly consists in aquatic arthropods, molluscs and fishes, but also in turtles; they can nourish also of birds. The young nourish of aquatic invertebrates and small fishes. The nutrition is mainly nocturnal; they have been often accused for the disappearances of domestic animals in various agricultural areas located close the forest, this not proved accusation has been one of the causes of their killings.

After some biologists they are responsible for occasional attacks to the men, even if the sae are quite rare. Between the 1930 and the 1960, they have been subjected to a very high venatorial pressure for the trade of their skins. The trade of their skin, which at the beginning was one condemnation for them, paradoxically, in the time, became a “primus movens” for their eco-sustainable management, by means of the institution of crocodile farms. Nowadays, the hunting in the wild is forbidden, whilst the major dangers come from the deterioration of the habitats where they live due to the pollution, the increasing urbanization and, for instance, due to the conversion in areas for the zoo-culture, such as the pisciculture, which are remarkably degrading the coastal and mangrove areas. 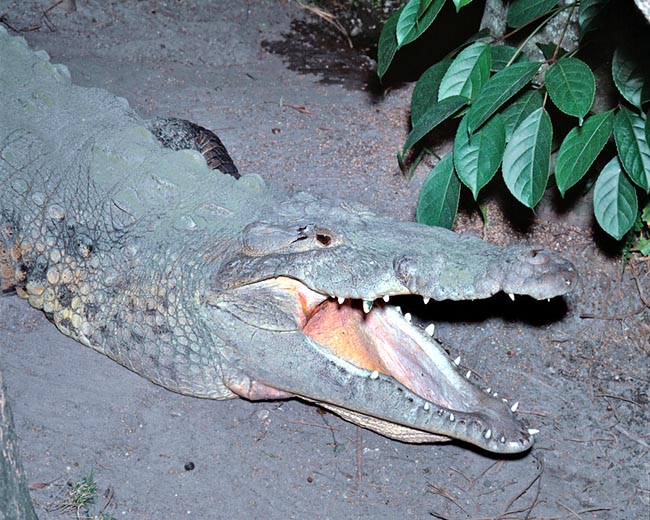 In Ecuador, unfortunately, are ever more the mangrove areas being destroyed for creating room to the pisciculture; in Nicaragua, on the contrary, the poaching goes along with the legal hunting for several species of caimans.

Albeit the ecology, the ethology and the zoology of this species of crocodile are fairly known, the data of population biology available are rather poor; population censuses projects are urgent in all areas where the same is fragmented.

However it is, in principle, biologists suspect that, but USA where it seems that the actual population is increasing and therefore enjoys a good health, and in spite it is the species of crocodile with the highest distribution amongst the species of loricates of the New World, in more than the 2/3 of the remaining areas t is, unluckily, in dangerous decline.

Among the Central-Southern America countries where it is distributed, those where it seems that the populations are in better shape are Belize and Cuba; the Crocodylus acutus is protected by governmental laws, in spite of this, poaching is still present, furthermore, even if the nations participating to eco-sustainable management programmes are many as eight, or because the laws are not strictly applied, or because the management is not done by qualified personnel (non biologists), the outcomes are quite poor and their number goes on in decreasing. They are trying with the construction of crocodile farms, but it’s still too early for getting an overall assessment. Probably, structures of this type will expand shortly also in Jamaica and Colombia, the purpose is that of freeing specimens of American crocodile, born and bred ex-situ, in the wild, for reintegrating the much impoverished natural stocks; this method stands at the basis of the good density of population this species holds in Cuba.

In other areas, such as in Venezuela, the intact biotopes do exist, what are missing or there are too few, are the specimens of American crocodile, and so they may be populated by taking groups from crocodile farms of other nations. In the Biosphere Natural Reserve of Jaragua-Bahoruco-Enriquillo of the Dominican Republic, in the Enriquillo Lake, there is a stable population of 200 individuals, to which we have to add a genetic reserve of sub-adults bred in captivity.

In USA, in 1984, the biologists of the “Fish and Wildlife Service” (a real and proper equivalent structure, most unluckily, in Italy does not exist), drew up a recovery plan for this species of loricate. The key points of this intervention consisted in the safeguard of the habitats, for instance, by confining them in the humid and Mangrove areas of the Everglades National Park, which has been declared World Heritage Site by UNESCO; an eco-sustainable management of the species by means of ecological education programmes addressed to the population, with stages also in the schools of various level; utilization of qualified biologists for the management of these areas (and this in Italy, as well as in other European countries, even if there are prepared and qualified biologists, very rarely happens and the negative outcomes are clear); reduction of death rate caused by struck along the motorways and state roads, by digging underground passages which allow the animals to move unscathed; full fight against the poaching with severe punishments; interdiction of the legal hunting too (and also this, in Italy and in other European countries is badly ruled, obviously, we refer to autochthonous endangered species); methods of reproduction in captivity, by means of the crocodile farms.

The major dangers they meet in USA stand in the deterioration of biotopes, such as Mangrove swampy areas outside the Everglades; shots and various noises; malicious acts, like the destruction of the nests and of the eggs; road accidents. In Florida, in 1993, the biologists have counted 34 nests and this number has the progressively increased thanks to the above management plan.

The Crocodylus acutus is one of the largest species of loricates: as an average, the males reach the 5 m of length, with not confirmed peaks of 6-7 m, the females are smaller. A swelling in front of each eye is observed in the adults, the same is absent in the sub-adults. The armour is characterized by a rather irregular and reduced structure vis-à-vis other species. A single line of four post-occipital lines, immediately behind the head, may be clearly seen close to the bigger nuchal scales.

In the American crocodile, but not only in it, the pair of the last anterior teeth, placed in the lower jaw, may pierce, while growing, the upper jaw. At the apex of the snout may be observed small dimples in the black pigmented skin which act as tactile and sensory organs, utilized for perceiving the presence of preys under water. The young specimens have a more alive livery in the colours and more uniform, in the adults the colouration becomes olivaster. These crocodiles have a silvery iris. For a crocodile, the snout is narrow and long. They have 66-68 teeth, of which 5 are pre-maxillary, 13-15 maxillary and 15 mandibular.

The females reach the sexual maturity when 2,5 m long. Depending on the habitat where they are located, they utilize different strategies for the construction of the nest. Usually it’s matter of holes, to be buried once the eggs are laid. They are well drained and when, due to the too hard soil, they cannot dig, then they build up nests with the mud or whatever material which can be useful for such purpose. In order to avoid the water of the floods, which, during the rain season, may inundate the nests and consequently drown the eggs, the deposition takes place during the dry season, after a courting period lasting about two months. The minimum number of eggs laid is of 20, but they may vary between 30 and 60, as an average, they are 38. It can happen that two females lay their eggs in the same nest.

The hatching happens after 90 days of incubation, with the approaching of the rain season. The homo-parental cares seem to have different levels, after some biologists, the mother grant the minimum protection and care to the nest, once laid the eggs, as well as to the newborn hatchlings, leaving them to their own destiny, after other biologists, on the contrary, the level of the parental cares is much higher, with the mother keeping, after the deposition of the eggs, close to the nest and protecting the newborns after the hatching against several species of predators, such as wild cats, raccoons, birds of prey and big fishes.

The biologists have observed that the young of this species vocalize less than those of other species. After these scholars, this lack of vocalization is to be attributable to the high venatorial pressure to which this crocodile was submitted during the second quarter of the XX century, a form of rapid etho-ecological adaptation adopted for surviving; essentially a “I am not heard, I am not killed”.